The Supreme Court will now decide TV channel content too? 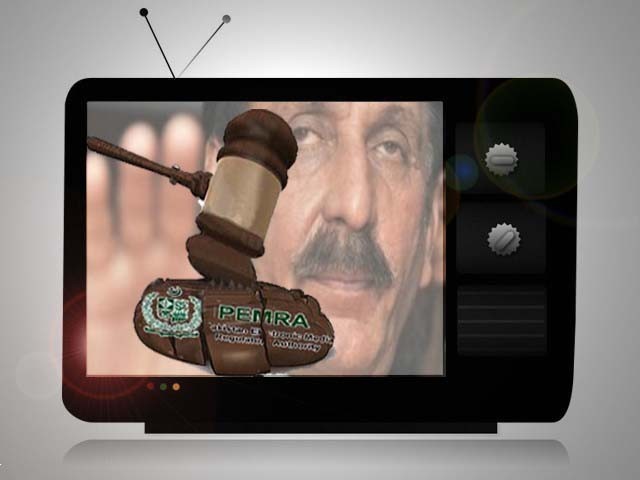 TV channels are free to get as obnoxious and obscene with the politicians in name of popularity and good humour, but the judiciary stays untouchable. DESIGN: ERUM SHAIKH

As if we have not had enough of moral policing from our mumanis and chachis, teachers and professors, co-workers and bosses, Chief Justice of the Supreme Court of Pakistan Iftikhar Muhammad Chaudhry decided to take action on behalf of a letter written by former head honcho of Jamaat-e-Islami Qazi Hussain Ahmed and Justice (retd) Wajihuddin.

This action is against obscenity aired on TV channels. Justice Chaudhry believes that TV channels are spreading vulgarity and called PEMRA officials to the court to admonish them.

According to the news reports, the Chief Justice cited some offensive programmes and advertisements and said that one finds it difficult to watch them with family. However, I am saddened by the fact that he does not cite offensive programmes that one cannot watch even when one is by himself; leave alone with the family and inquisitive children because they test the limit of sanity.

Where was the suo moto when the engineer Agha Waqar was going on about his water kit and federal minister Khursheed Shah was raving about it?

Why was it all not shut down?

If you ask me, our national pride was in tatters when that travesty was being passed around as a scientific breakthrough. I was so embarrassed to watch it that I literally hid my face. My nephew asked me if laws of thermodynamics can really be altered and I was even more ashamed to be a taxpaying citizen of a country where a 12-year-old was subjected to witness this litany and had to make sure that it was not true.

I hope one of the obscene programmes that the CJ took notice of is Maya Khan’s Ramazan show where she addresses everyone – men, women, children, adults, and little green Martians – with terms like mera bacha, pyaroo, golo polo and what not. Her conversation is peppered with many ‘Haaye Allahs’ and fake tears. Watching her calling a man like Nooruddin bhai ‘pyaaro’ tested every fibre of intelligence, rationality and prudence in my body. He is an activist in his 50s who suffers from muscular dystrophy and has been working for the rights of people with disabilities, for goodness’ sake! But that is not considered vulgar because her conversation is interspersed with multiple references to Allah and Rasool and she wears a dupatta on her head!

While the CJ had PEMRA’s chairman in his court for this matter of obscenity, the CJ thought that he should also ask the PEMRA chairman about the programming on private TV channels. This was in regard to channels which air programs about higher judiciary and the CJ ordered him to bring on all press conferences and programmes against the judiciary before the next hearing. However, he had no issues with programmes that mocked the politicians of the country or those that call them all sorts of names because they are ‘popular’ and ‘in good humour’. This basically meant that TV channels are free to get as obnoxious and obscene with the politicians in name of popularity and good humour, but the judiciary stays untouchable.

He rounded up his sermon observations by calling on to TV channels to leave religion out of it. Looks like moral policing in this country has found a new judge, and champion against the heretics who enjoy the very, very obscene display of something like a Bilal Khan video or women’s tennis.

If my Twitter feed is to be believed, Justice Chaudhry told the PEMRA chairman that August personalities like Aurya Maqbool (a babu) and Ansar Abbasi (journalist and former Jamat-e-Islami worker) will point out the incidents of fahashi (obscenity) and PEMRA will shut them down.

So basically, if the CJ has his way – and he usually does have his way – people who have no business butting in broadcasting and have no experience in national broadcasting policies formulation will decide the content that will be allowed to go on air.

At times, I wonder if I live in a country that is a replica of Ayn Rand’s Fountainhead and Mufti-e-Azam Iftikhar Muhammad Chaudhry is the Ellsworth Toohey of our times. Our tragedy is that we don’t have anyone to challenge the Ellsworth Tooheys of Pakistan.

She has worked as a journalist, teacher, salesperson, activist, tour guide, election observer, fruit vendor, copy writer and television producer in the past. Tazeen blogs at tazeen.net/

Fatwas against science and semantics

Election campaigns: What about those who are not victims of a drone attack?

The importance of sisterhood