Only in Pakistan: In love with life at a refugee camp! 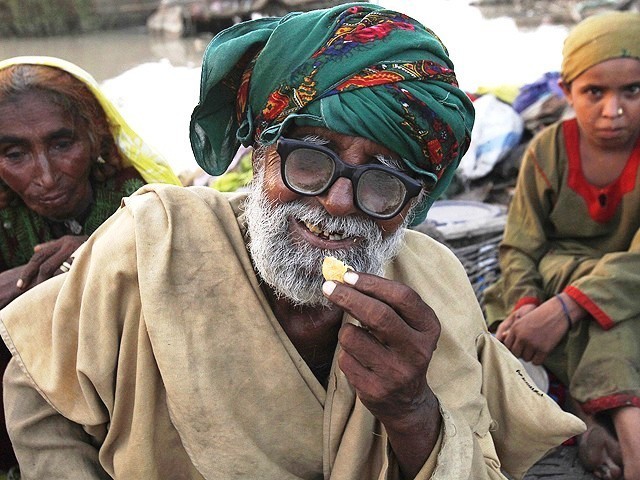 Instead they were full of energy I found hard to place, but what came closest to what I would think is a burning desire. PHOTO: REUTERS

The floods that strike parts of Pakistan every other year displace many communities, economically handicap several others and leave a burning wound in the shape of puddles, dead livestock and broken up pieces of what used to be roofs, doors or a mirror.

The people that decide to move away become refugees in some other part of the country.

The mere mention of the word ‘refugee’ immediately suggests helplessness, strife and UN sponsored tents. Disaster changes their lives for the worse, and most refugees become reliant on the government and the aid of certain NGOs in a struggle to begin their lives anew; a struggle that is more often than not doomed to failure.

The lives they end up with are worse than the ones they had before.

One camp, however, does not fit into this picture.

The refugees call it the ‘IBA camp’, because it is located on a stretch of land directly opposite the vast expanse of the Sukkur campus of the Institute of Business Administration.

At the moment, the camp is home to over forty refugee families from several parts of Sindh and Southern Punjab. These forty families comprise of seventeen different castes – a fact that a smiling Khidmat tells me with a certain tinge of pride. He then invites me into his tent.

Khidmat is considered the leader of the camp. Everyone in the camp looks up to him for advice and comfort. He is also a writer.

Inside, on the charpoy lies a goat shielding itself from the heat, while the elders of the camp assemble themselves on the floor in front of me.

“We’re not going back. We don’t want relief. We just want a new life,” said one of the other elders in the tent.

In the conversation that followed, I discovered some spectacular things about this group of people. They were not distraught, even though their living conditions were far from desirable. They were not sad. Instead they were full of energy I found hard to place, but what came closest to what I would think is a burning desire.

They saw the flood and their subsequent relocation as an opportunity.

Most of the families in the camp had been under feudal rule before they moved. They had nothing of their own; no land, few possessions and hardly any life outside of their daily work on the fields.

“We want something we can call our own,” Khidmat said while showing me a journal.

In this journal he keeps a record of everyone that comes to visit the camp, newspaper clippings showing scenes of the flood, and several of his own compositions. Among them, there are letters in Sindhi addressed to the president, asking him to help the people of the camp buy their own land so that they can start their lives afresh. There are also several poems on love and one, strangely, on Mountain Dew.

“The kids here love Dew,” Khidmat said while blushing profusely in response to my request of reading one of the love poems out loud.

At this point one of Khidmat’s son, Saddam, entered into the tent and recited with command the English alphabets, to the glowing pride of his father.

In answer to my question as to the source of the education of the children, Khidmat told me of a group of volunteers from IBA that showed up every alternate day and taught the children in one of the larger tents in the camp. He said education was vital if they wanted to change their lives.

Khidmat then took me on a round of the camp. In four adjacent tents sat women sewing some exceptional patchwork quilts in bright colours which they sold in shops in the city. I was also introduced to an architect, Salamat, who used to design minarets for mosques in his native village, but now makes sketches of the happenings in the camp and puts them up inside his tent.

Near the end of my visit I asked Khidmat if any of the families wanted to move someplace else. He laughed out loud and replied,

“No. No one wants to move. If someone moves, we all move with them.”

I hadn’t expected to see a place like this, or to meet people so full of life inside a refugee camp. On taking my leave, the poet in Khidmat took shape, and he left me with a few words that even with my limited Sindhi, left their mark:

A devout cricketist, Zain graduated from LUMS last year and is now on his way to Germany to pursue a Masters in Linguistics.

To the Pakistan cricket team: Baby, you're a firework!