Say ‘no’ to foreign aid 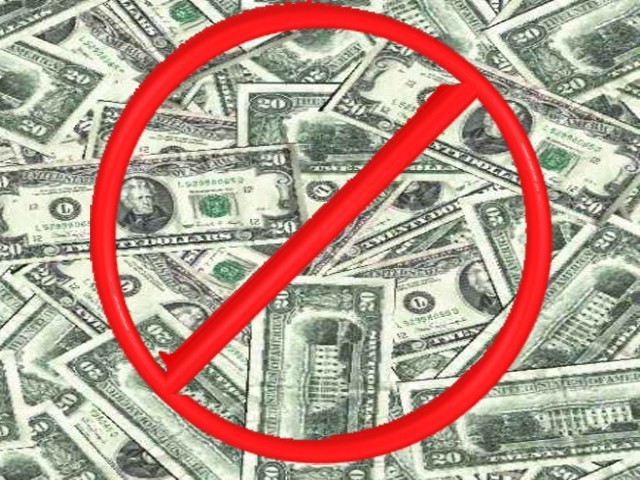 In the past, foreign aid to Pakistan has gone on to make its military richer, stronger and mightier while directly undermining the democratic process.

Selective narratives or views often tend to portray a picture of things which is very detached from reality. That, I feel, was the case about a certain recent blog that I read on The Express Tribune regarding ‘foreign aid’.

The respected author portrayed ‘foreign aid’ as the ultimate blessing for the destitute, corrupt and inept countries, somehow asserting that daring to refuse such aid is a crime against humanity. He went on to show that foreign aid is meant for goals such as eradication of poverty, progression of education, health facilities and other such noble goals – and for these reasons, it must always be welcome.

While what the author stated may be true in an ideal world, the fact is that in the world we live in, foreign aid isn’t too much of a blessing. Without a doubt, money ‘donated’ by other countries comes with many strings attached and it must be seen where those strings take us. In the past, foreign aid to Pakistan has gone on to make its military richer, stronger and mightier while directly undermining the democratic process.

What we need to do, is set a definite benchmark as to what kind of aid is good for us.

The second, and chief, issue with foreign aid is that it comes with extremely poor accountability. I have personally been in the development sector for a few years and have worked with some very reputable organisations and I can tell you that per dollar, only ten cents are being spent on the actual on-ground development work in Pakistan. Some NGOs are indeed delivering actual results but most have pitched up their organisations simply as ‘businesses’, which are indeed lucrative and thriving.

To cite a more recent example, the television series ‘Sesame Street’ which was being worked on by Rafi Peer Theatre was accused of embezzling millions of dollars, a charge which forced the US to abandon the funding of the project. This is merely the tip of the iceberg. Many organisations overseas, governmental and private, working for humanitarian causes, send billions our way to help us solve our problems. However, the actual work being done is next to nothing.

If a billion dollar warrants a school for 100 students on ground, you may call it ‘at least some good being done’ but I hold it as providing the bread-and-butter of another legion of corrupt organisations, only triggering our problems further.

The balanced way would be to discern the affects of foreign aid and gauge how far it has done any good. The only visible results of foreign aid in Pakistan were in the eradication of polio to a great extent, a project which in itself is in jeopardy right now. No other tangible objectives have been achieved by the billions of dollars which come to us as foreign aid – at least not on a visible scale.

Even the auditors of such aid are mostly local personnel who end up getting a bite of the cake to tell the donors that all is well. What surprises me is that despite this history of aid going to naught, why do the foreign donors keep funding in the same, good-for-nothing manner in the name of helping us? Why aren’t better accountability measures being devised to ensure that every dollar that comes, in the name of aid, helps the cause it’s meant for? Unless the donors responsibly ensure such accountability, developed within the local context, their aid is no good to us.

While I agree that political parties use the issue of foreign aid to score populist marks, this alone doesn’t warrant the whole argument against foreign aid to be wrong. It is about time we realised that foreign aid is definitely not the solution to our problems. Rather, we have to find solutions to our own problems and try to implement them and seek their resolution.

Grameen Bank in Bangladesh wasn’t the result of foreign aid- it was started as a research initiative taken by an individual. Later when this institution proved to be effective and transparent, it then received foreign grants from the likes of the Ford foundation.

We need such transparency measures in place which ensure that if foreign aid is being received, it must go to organisations that can deliver on their responsibilities– not the ones who are good at filing paper work!