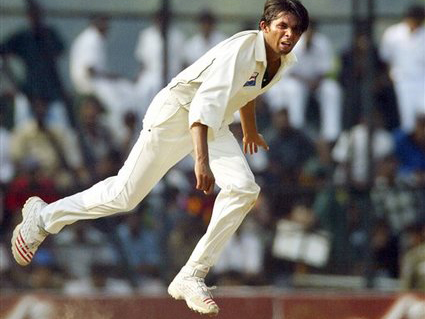 While the immediate reaction to our cricket team’s recently discovered shenanigans is of hate and shame, there are many Pakistanis who believe that it is too soon to judge. To control one’s emotions and wait for more compelling evidence is both admirable and astute.

However, what this evidence will be remains to be seen.

Everything that has come to light so far may be convincing, but none of it sounds like damning proof that could stick in a court of law.

Phones have been confiscated. Mazhar Majeed was an agent and was well within his rights to be calling Pakistani players. In fact, I would expect it to be routine. The video seems to be from a well hidden but poor quality camera, getting a reliable time-stamp from which seems unlikely.

Pictures of cricketers with Mazhar are also, just pictures with a sports agent and do not reveal anything malicious or out of the ordinary. The only angle that seems to hold any real legal threat is that Scotland Yard intend to compare the currency notes found from the Pakistani players’ hotel rooms with those confiscated from Mazhar.

What ‘similarity’ between notes could be submitted as evidence also remains vague, my best guess is that the serial numbers could be adjacent (perhaps the lawyers amongst us could elaborate). Other than this, nothing seems to really stick.

I am in no way defending the players, nor do I think they are innocent. Judging from pictures of the no-balls, the body language of accused players and the uncertainty of the press conference, I am quite convinced that our players are guilty of spot-fixing. The manager and captain never even seemed to plead that they were innocent; their stance seemed to be more of, “Well let’s see how much the police find out and then we’ll just admit to that.”

Should a team of cheaters really be a surprise for us?

Our international talents are refined versions of those players who play street cricket. The one skill acquired in street cricket is cheating. Every ground or street I have played in has had some dodgy calls accompanied with lots of fighting and cheating, especially if money is concerned.

Even if our international team really does comprise of cheats, two special mentions are in order. Firstly, a shout out to Mohammad Asif; it struck me while watching a slow-motion video of him running with a gangster song playing in the background (one of those news channel parody videos). This guy is actually the cool ‘bad guy’.

To the contrary, young Aamir’s nervous twitches landed him delivering a ridiculously large no-ball, the hardened criminal Asif delivered a perfect, regulation inch-over-the-line no-ball. Really got to hand it to him, the only thing missing was a toothpick in his mouth and a cowboy hat which he would tip as he winked at the camera.

The second (less sarcastic) salute goes to Shahid Afridi. Apparently our spot-fixers hated him because he wanted to play honestly. Putting the word honest next to Afridi does bring memories of the ball-biting incident to mind, but hate him for it as much as you may; at least his heart was in the right place. In my opinion, the person who was cheating for you is better than the person cheating from you.

My question to all the people playing it safe is: what if compelling evidence does not arrive? What course of action should be taken then? What should be done with these players after emotions subside and evidence fails to arrive?

There are some people posting videos on youtube who are convinced that it is all a ploy by the British media to destroy the Pakistani team. They believe that the shadow angles of pictures show that they are fakes, and that the video of Mazhar was made after he was arrested. The flippancy of their arguments is testament to their delusion, but I suspect that it may end up being a common Pakistani argument to the world if compelling evidence does not arrive.