The mute existence and extinction of peacocks 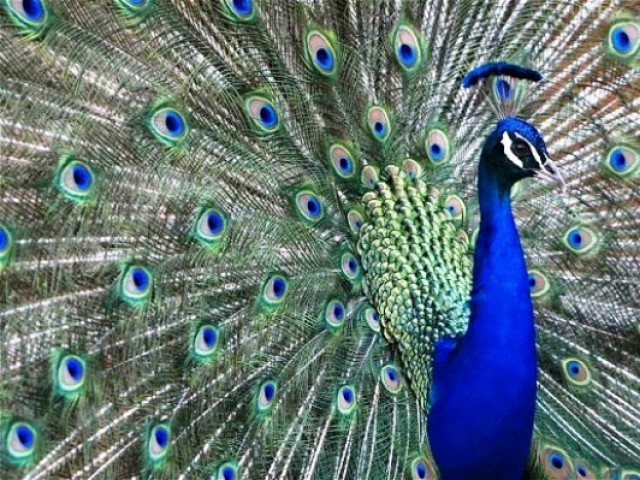 The beautiful bird caught Alexander’s (yes, Alexander the Great) attention while he was passing through Sindh. PHOTO: REUTERS

The recent reports of peacock deaths in Thar, Sindh, have given rise to serious questions concerning the wildlife department and the media. It is estimated that around 200 peacocks have perished due to the outbreak of a highly contagious disease.

The disease is commonly referred to as Nokesal Rani Khet (New Castle disease). It is said to be transmitted from chickens. It is also alleged that the change in rainfall patterns could also be responsible for the spread of the disease.

Sadly, the response one gets for voicing concerns of these ‘bezuban’ (mute) animals is disappointing. It cannot be denied that the state of human affairs itself is so pitiable let alone the peacocks.

But one cannot simply witness the extinction of this exotic bird and not do something about it.

There is no reason to remain silent.

In Thar, they are partly considered domestic birds as well as wild birds. The beautiful bird caught Alexander’s (yes, Alexander the Great) attention while he was passing through Sindh. He sent this gift of nature to his mother afterwards.

The importance of this exotic bird is not limited to its beauty; it is also an indispensable component of the ecosystem. It plays its role by controlling the population of snakes in the region, which are its prime enemy.

If the disease is not controlled in due time, the bird may perhaps be on the road to extinction, at least in this part of the globe. The species have been subject to extensive smuggling and illegal sale of eggs; their habitation has been plummeting at an alarming rate due to grazing and other human activities and now they are the victims of a disease!

Will this end only when they themselves seize to exist?

Under such circumstances, neither the government nor the media have taken up the issue. The wildlife department census has reported that the peacock population is around 50,000 across Sindh. It is hardly surprising that the number is perhaps an overestimate given that the department is neither interested nor equipped with the resources to make this estimate.

The issue requires an immediate and serious response because peacocks are not found across the entire Thar desert. They are limited to a 200km radius from Mithi. The region with wild bushes and other plantation during the rainy season is the natural habitat for peacocks in Thar.

As has already been pointed out, no effective initiatives on the part of the government have been taken to prevent the disease from spreading ─ had they bothered to develop a vaccine when the disease had been discovered in the previous years among the chickens, this tragedy today, would not have occurred. This could be a seasonal disease or one that could strike again at any time of the year ─  in fact, there are chances that other diseases could also be transmitted from chickens to peacocks.

The process of finding a cure or a vaccine has been further hampered by an absence of a veterinary hospital that meets the demands of the required expertise in the field. In this area of expertise, it is disappointing that the only veterinary universities in the country are situated in bigger cities. The bill concerning the establishment of a veterinary university in Nawabshah/Sakrand has not been passed in the Sindh Assembly. It’s probably because the members are deeply occupied in settling their own personal scores.

Certain officials have pointed out that the implementation of the Sindh Wildlife Act 1972 might be the saviour. Its implementation might reduce the threat of their elimination due to smuggling and illegal sale.

But this will not help cure the disease or prevent it from spreading. For that, the government must arrange proper medical facilities, initiate a research center and engage appropriate experts to finding a solution to this epidemic.

Most importantly, the media must highlight this issue of concern. The government tends to take notice only if the media becomes active ─ the media has an instrumental role to play here and one that can help save these beautiful birds.

So why the silence?

A student of law at University of London international programmes.