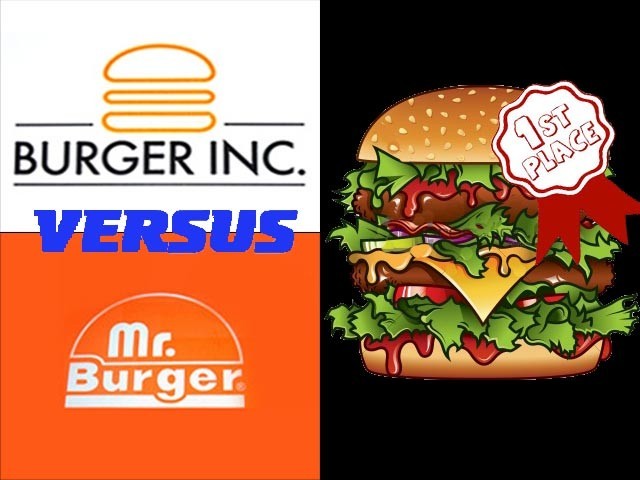 Burger Inc. reminded me of something – something wonderful from the past; the size was very reminiscent of my ever favourite Mr Burger with cheese. DESIGN: ERUM SHAIKH

A couple of weeks ago I was sitting at Mr Burger (the boat basin outlet), thinking

Mr Burger was once the most popular, rather the only recognised burger place in Karachi. I say ‘recognised’ because while Hanifia and Chips were contenders, the gap between their demand and Mr Burger’s demand was huge.

Of course there were the occasional diehard Chips fans, who Mr Burger lovers looked down upon thinking to themselves,

“Hmph… What do they know about taste?”

Anybody who grew up in Karachi in the 90s would know what I am talking about.

But then, McDonalds, KFC and other international fast food chains raided the Pakistani market, and our proud Karachi outlet was not able to fend them off. While Mr Burger tried to gain ground by renovating its outlets multiple times and by adding greater variety to its menu, in the shape of brownies, donuts, hot dogs, and even rolls, it was unable to keep up with the internationally recognised standards of McDonalds or the appeal such chains had created for the children’s market.

Slowly and steadily, like many other things in this great city, we saw Mr Burger go down – to the point that if you go to boat basin at lunch time on a weekday, you will hardly find anyone at the Mr Burger outlet, while finding a place to sit at Chips right next door would be a mission.

So there I was thinking, as I do sometimes: What did Mr Burger do wrong? As someone who has spent a year in a business school, I started looking for flaws in their marketing and operations strategies. At the end of my analysis I concluded that for Mr Burger to regain its lost glory it must take certain steps.

It must go back to its roots and market itself as the best ‘burger’ place in town and to do that it must eliminate all the extra items from its menu! One of the things that Mr Burger did that Chips did not was the ridiculous increase in prices. The only plausible reason I can think of as to why they did this was that they thought by matching their prices with McDonalds they could match their image as well. I think that pretty much backfired and lost them all their loyal customers.

So I thought and I forgot, until I went to this tiny little outlet that had recently opened up in Badar Commercial Market, DHA called Burger Inc.

Now, I didn’t end up there randomly. Someone on my Facebook page had shared the place’s menu card and when I opened it, I saw what I wanted to see: Burgers! They also serve fried chicken, but the main focus was on burgers and that too of very limited variety – this was the first thing that appealed to me.

So, I decided to go there along with a friend. When we drove up to the outlet, the first thing we noticed was that there was no seating. Now, this is something that did not go well for me. I mean, you’ve made such a nice place with a proper fast food outlet look – the counter, the glass doors, the uniforms, I for one would like to sit inside and eat, instead of eating in my car.

But, perhaps they are going with the original One Potato Two Potato (OPTP) model; no dining, no delivery, only take-away. However, this was but a mere hiccup. I am sure as the business starts rolling, they would take care of this as well.

Now, I have only been to Burger Inc. once, and proper food critics would never trust an account of a one-time visitor, so it’s really at your own discretion, but I trust my taste buds enough to give a solid verdict. Something that I am very careful about is that, when I want to analyse the true taste of a food item, I start with the most basic of the items on the menu.

For instance, if I am having potato chips, I choose to eat the plain salted flavour instead of whatever else is available, as the true taste of the chip or in this case the meat or the bun, is not disguised by other flavourings such as sauces etcetera. If you can get the basic foundation right, you know the rest just falls in the right place automatically.

Keeping this philosophy in mind, I decided to order the Classic Burger, a plain beef burger with cheese and the regular vegetables. Here was the second shortcoming. Burger Inc is a fast food joint and while its menu card states a serving time of 10-12 minutes, I can tell you that it took much longer than the specified time. In fact, I remember telling my friend

(This place’s rating has already dropped significantly (in my books)).

To which he said,

At that point I told him to be patient, and boy did that patience pay off. When the burgers finally arrived, what hit me was the small size, compared to the sufficiently large burgers you get nowadays. I had heard some complaints about the size, but what I saw did not disappoint me. Rather, it reminded me of something – something wonderful from the past; the size was very reminiscent of my ever favourite Mr Burger with cheese. The wrapping too, was not the paper or foam box as you see at McDonalds, but rather the flexible wrap.

As soon as I unwrapped the burger, the car was filled with a wonderful aroma – a mixture of fresh bun, cooked beef and moist onions. As mentioned earlier, the burger looked small, but what was a very good surprise of the thickness of the patty. It had just the right amount of softness and meatiness to it. The reason I am stressing on this is that many times, when burger joints increase the thickness of their patties, it has adverse effects on the meat in terms of texture.

The moisture in the meat was also near perfect – not too much that water starts dripping out of the meat, like it happens with many international chain burgers, and not to little that the patty feels as if it was left on the grill for too long – some may like the char grilled bitterness on the outside part of the patty, but I prefer it to be cooked just right.

To put it simple words, the burger was really good!

While it reminded me of Mr Burger, the Burger Inc burger just felt fresher and not as greasy. Now, I didn’t write the first two paragraphs or the previous line to badmouth Mr Burger.

Trust me when I say this; I am a Mr Burger loyalist and no burger can replace the Mr Burger with cheese for me. But for other generations of people who have not been tainted by any such loyalties, I believe Burger Inc has great potential to form its own band of followers for it has done what Mr Burger was not able to do:

Make great burgers and burgers only.

Burger Inc is a must visit for burger lovers, and hopefully in the future this place will decide to expand to other areas in Karachi and even beyond this city. Maybe they will even introduce a dine-in facility.

Good luck guys, wishing you all lots of loyal customers!