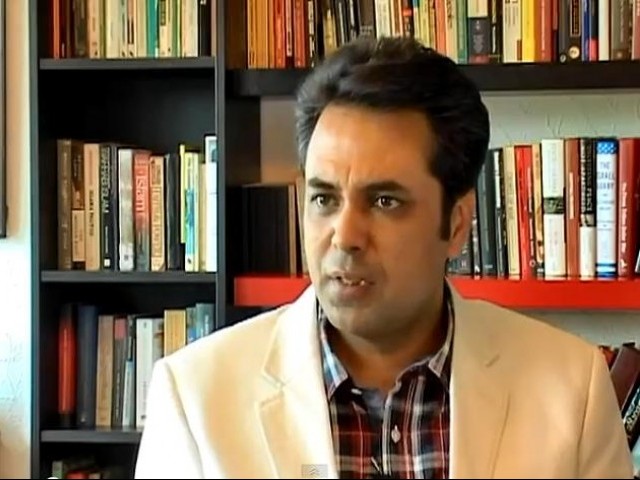 My liberal dreams are possible the recurring nightmare of Talat Hussain, who recently claimed in an interview that the Pakistani media supra-liberal. PHOTO: SCREENSHOT

It’s a beautiful morning in supra-liberal Pakistan. I wake up with a broad grin plastered across my pseudo-liberal face, as I head downstairs to the living room. I skim through the headlines on the Urdu newspaper: it’s all about the damage being inflicted upon us by religious radicalism, along with high praise for the United States and its efforts in combating it.

I turn on the television. They’re playing a documentary called “Veena Malik: The Pride of Pakistan”, in which various TV personalities take turns commending Ms Malik, the apotheosis of modelling industry, the paragon of courage, and a gleaming example for women everywhere. There’s no contentiousness, and no judgement.  Just 90 minutes of pure, uninterrupted extolment.

But the good stuff isn’t over yet. It’s time for the “Lefty Left Show”, a government-funded series designed for Pakistani children. It’s a fun-packed, richly informative hour on comparative religion, which encourages children to love all fellow citizens irrespective of their religious beliefs, especially the Ahmadis. Because as Lefty Left, the Lovely Ladybug says, “Don’t demand respect from others, until you’re ready to give respect in return!”.

This is followed by a string of talk shows, where they discuss in detail the imperativeness of improving our relations with India. Israel is rarely discussed in a negative way. Javed Chaudhry delivers a compelling monologue about how unfair it is to blame the victims of acid attacks. Maya Khan hosts a phenomenal show emphasising the significance of multiculturalism in Pakistan.

The tone throughout these programs is kept strictly secular. And it’s all topped off with the 10:00pm “Liberal Fascists Report”, which openly promotes LGBT rights, and pays tribute to the United States for USAID, and the marvellous job done by the drone strikes in countering terrorism.

The alarm clock rings at sehri time, and to the chagrin of my hyper-liberal sensibilities, I realise I’d been dreaming all along. That, I reckon, is also the recurring nightmare of Talat Hussain, who recently claimed in an interview that the Pakistani media is liberal…no…supra-liberal.

There is no consistency in the conservative argumentation of different regions. In Pakistan, conservatism implies support for Islamic laws and values. In Europe, the conservative parties are known to oppose the spread of Islamic culture, viewing it as a foreign intrusion. In the United States, it’s ordinarily the liberals who flock to defend the Muslim minorities, while the Tea-Party brims with anti-Islamic sentiments. It’s unreasonable to talk about conservatism as a single, international force, because what’s considered as a “conservative argument” in one country, sometimes qualifies as the liberal agenda in another.

The only thing consistent about the conservatives around the world, is the shared phobia about their respective media groups being taken over by liberals. From Sarah Palin’s unending harangues about the liberal “lamestream” media, to conservative Pakistani youth brewing imaginative conspiracy theories about how the media is being run exclusively by Amreeka and Izraeel.

How precisely is the conservative argument being locked out? Did somebody forget to invite Zaid Hamid to a talk show? Was the media not allowed to oppose the Kerry Lugar Bill in 2009, or did somebody accidentally defend the domestic violence bill 2008 on live television? Are drone attack casualties not being reported and staunchly criticised? Did a bunch of TV appearances by Marvi Sirmed leave behind such an unbearable stench of liberalism that the entire industry has been left forever tainted? Or is it simply that someone refused to air a special report blasting Angelina Jolie for not sharing our cultural values, despite all that she has done for the flood victims of Pakistan?

Pakistan’s media, and the sociopolitical milieu in general, is a battleground between the right-wing and the centrists. The entire field is so conservatively charged that a liberal can barely utter a sentence and not be instantaneously slapped with allegations of treason. It is the perceived criminality of liberalism, a term that sounds the same as “debauchery” to an average Pakistani mind, which is truly alarming. If anything, it’s the liberal argument that is systematically being locked out.

It’s not the media that has become supra-liberal, it’s the country that is becoming uber-conservative. Perhaps Mr Hussain is drifting so far to the right of the political spectrum that even the median is beginning to appear as a tiny dot in the distance.