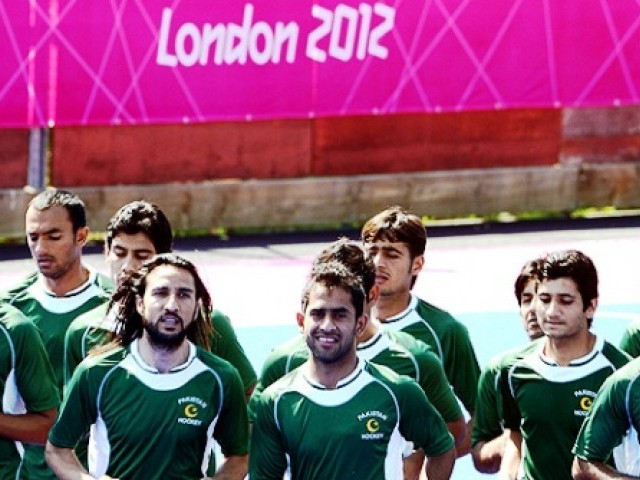 And although this was a close call, this match gave us what we were looking for; belief. I believe in this team now! PHOTO: AFP

I grew up in a neighbourhood where there were seasons of sports. Every time there was a major hockey competition, it’d be a hockey season.

We had two levels of it: first we’d play in our street and then there would be a match with the boys from the other street in the big playground. Not all of us owned hockey sticks – most would climb trees and find a naturally bent stick (usually the joint would provide the required bend) from the tree and play with that.

When I saw our boys, today, standing with their hands on their chests while the national anthem was being played in London, it reminded me of the glory days; the 1994 World Cup. I was only 10-years-old back then, but I distinctly remember the celebrations when Mansoor Ahmed stopped that penalty and I started dancing.

But this pretty much is it when it comes to hockey for us these days; nostalgia.

Be it my generation or the ones before me, we, I believe, are the last generation who has seen the hockey craze. We have done nothing good in the World Cup since 1994. We haven’t been on the podium of the Champions’ Trophy since 2004 and our last medal (bronze) was taken in the 1992 Olympics. Gold, in the 2010 Asian Games, was the last form of celebration we’ve had- but every time we go out of Asia, we get thrashed.

So, everything I’ve written so far suggests that all we have for these Olympic Games is hope. But we have a lot of it; this team somehow gives me a good feeling.

And then they played.

We had been hearing news about them being beaten by Belgium and the Netherlands but this team took on Spain like champions.

Sohail Abbas (misspelled as Soahil on his shirt- typical Pakistani booboo) led the team well. You could see the energy pulsating through the team right from the very start. When Pakistan got the first penalty corner, everybody took to the edge of their seats. Although it was a great save by the Spanish goalie, Francisco Cortes (who by the way did exceptionally well throughout), the sublime scoop by Abbas on a penalty corner was a treat to watch.

At half time, a friend asked me what the score was and I texted

Then there were those five minutes in which Rehan Butt got space and ran towards the Spanish goal, with me yelling,

And he scored!! Right between the legs of the Spanish goalkeeper.

With a sigh of relief and pride, I savoured the moment- it had been far too long since we enjoyed a hockey goal like that.

But before we could rally celebrate (I hadn’t even tweeted about it yet) Spain got even! Right between the legs of the Pakistani goalkeeper, Imran Shah.

And before we could get over the trauma of an immediate equaliser, Spain scored again. Umpire Nigel Igoo of New Zealand awarded the goal to Spain but only this time around, there was drama; Pakistan challenged the goal.

Holding our breath, we waited for the decision and then, the referral umpire turned it over, finally putting us out of our misery. We could breathe again!

All this was happening a few minutes before iftar time. After a long hot and humid day here in Lahore, we hardly had any energy to speak but we shouted every time there was a chance.

Although this was a close call, this match gave us what we were looking for; belief. I believe in our team now.

We have something to look forward to. Let’s hope and pray that we can bring home some gold. Go team green! Go Pakistan!

A chartered accountant in Lahore who loves cricket, food, poetry and music . He holds expertise in Auditing & Business Advisory, teaches and conducts corporate training every now and then. He tweets @aleemzubair (twitter.com/aleemzubair)

Lahore is the best city in Pakistan!

10 tips to enjoy the winter in Lahore

Going to Lahore? You must try these treats!