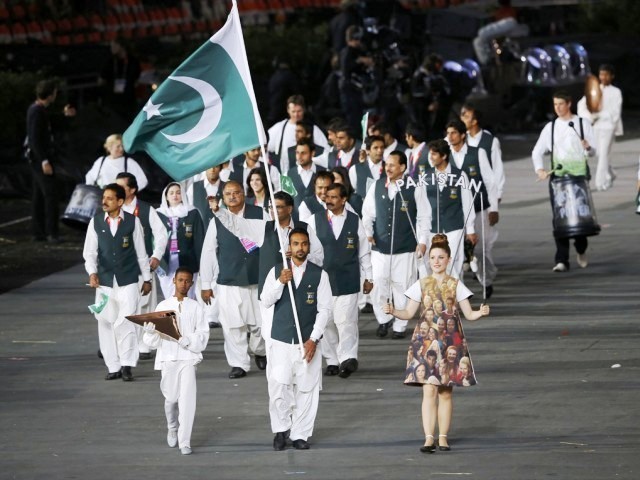 Sohail Abbas displays the happiness, excitement and confidence that was so lacking in our team as they walked by, dejectedly waving their flags, at the Olympic parade. PHOTO: REUTERS

A lot of things were inherently unique about the Olympics opening ceremony: the forging of the Olympic rings or the winged cyclists cruising to the sound of Arctic Monkeys. The fact that my friends and I recognised a good chunk of the bands and books mentioned made me wonder how much Britain has influenced us.

But that is not why you stay up till Sehri. At around 4ish my brother yells:

I mentally go through the alphabets LMNOP and scream

That is the real reason: to catch a glimpse of Team Green, even for just 10 seconds.

Team Pakistan did indeed march. Forget The Sun visa scandal and that the British High Commissioner thinks nobody forges documents like a Pakistani. Forget that the Olympic team includes only two women, the same as Saudi Arabia – a country which only just accepted the existence of women athletes. Forget that the lacklustre waistcoats make you wonder what the US press is complaining about – at least their team’s preppy outfits looked nice. The real question is why did the Pakistani contingent not smile?

Sohail Abbas looked dead straight ahead like he was going to the gallows instead of representing Pakistan as its flag-bearer. So engrossed was one woman with her dupatta that she refused to look up once. One athlete with greasy shoulder-length hair seemed to give angry little stares at everyone. Only one player gave a little wave. But not one of those athletes cracked a smile! Every other country’s team seemed to be enjoying the spotlight. The American contingent came out pumping their fists chanting USA! USA! China’s own sea of athletes looked cheerful. Jamaican flag-bearer Usain Bolt led his team with a swagger.

For goodness sake, the Greeks came in grinning and waving with their country in economic turmoil that may take Europe with it. Syria is going through a civil war, but their team looked so exceedingly jolly, it was worrying.

So what was our problem? Why didn’t we look cheerful?

It wasn’t just that we didn’t smile – we walked on looking so small, so insignificant. The Olympians of a 180-million strong nation looked bewildered, as if they didn’t have the backing of those 180 million at home. So what if we’ve only won 10 medals in the last 64 years?  I’d never even heard of Saint Kitts and Nevis, but their team walked in like they’ve been winning gold since they came into existence.

Where was our self confidence?

Maybe we take ourselves too seriously or maybe we’ve forgotten how to have fun at a collective level. It was sad, considering the British were cool enough to include Rowan ‘Mr Bean’ Atkinson messing up Chariots of Fire, and to make it appear as if the Queen had jumped out of a helicopter.

Maybe it had something to do with our chef de mission Aqil Shah who told all athletes to maintain discipline at the opening ceremony, as

“He did not want any mishap leading to embarrassment”.

Really Mr Shah? Was smiling also included in that memo?

The worst part was that it was not reflective of our team. On PTV Sports a two-minute clip “Raising an Olympian” is being aired, in which Sohail Abbas’ mother talks about her son. The hockey player goes on to give his mother a hug and smiles at the camera. It is this heartening clip about a Pakistani athlete that makes you root for our team just that bit more.

Sohail Abbas displays the happiness, excitement and confidence that was so lacking in our team as they walked by, dejectedly waving their flags, at the Olympic parade.

Sometimes all it takes is a smile.