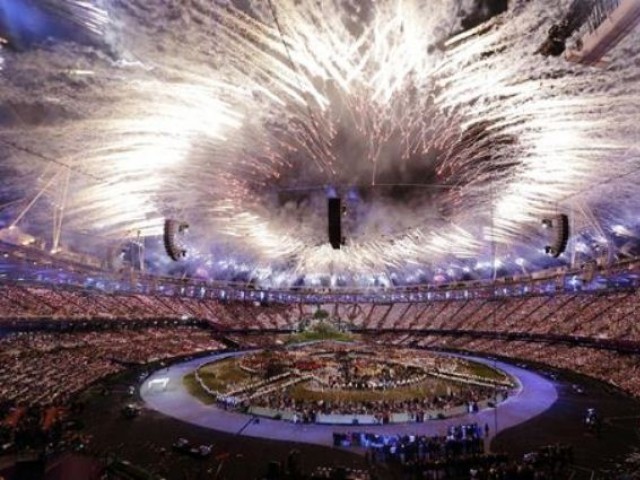 The long awaited London Olympics 2012 opening ceremony finally took place last night! Had it not been for the convincing tweets from literally everyone on my Twitter timeline, I don’t think I would have watched it, but I’m glad I did.

Here are some tweets that tempted me to tune in to watch one of the most glorious Olympics opening ceremonies I’ve ever seen.

Genius, that was really unexpected selection to lit the Olympic cauldron, liked it. #OpeningCeremony #London2012

Totally entranced by the opening ceremony of #London2012 olympics !!

So I’ve decided to share with everyone the highlights of the Olympics opening ceremony, directed remarkably by Danny Boyle.

All rise; the Queen is here:

This sequence is set in a perfectly British theme, of course; bobbies marching, the classical background music, a beautiful aerial view of the palace (royally shot, I must say). James Bond (Daniel Craig) steps off his car, dressed to the nines, at the palace to escort the Queen Elizabeth Windsor to the London Olympics. He makes his way through the palace ─ a smug look on his face. Upon entering her room, he is greeted reluctantly by Your Highness and they move to the royal chopper to head to the games. After being waved at by hundreds of enthusiasts, they reach the arena, where the Queen (her stunt double) takes off in a rather ‘007’ fashion. She jumps off the copter, fastened to her patriotic Union Jack parachute! And what a sight it was! I mean, watching the Queen jump of a helicopter like a fiery Bond girl? Definitely a once-in-a-lifetime thing. Paired with classic James Bond music, this sequence had me laughing and appreciating the totally cool transition from naturally royal and conservative to hilarious and awesome.

Of course, the real Queen’s entry wasn’t compromised for the fun and she made a graceful entrance (through a proper door in the arena) with the Duke of Edinburgh.

Mr Bean’s antics at the Olympics:

Then the London Symphony Orchestra, led by Simon Rattle, began performing. Rattle conducted the orchestra to play “Chariots of Fire” and some seconds into the smooth melody of violins, cellos and double basses, a certain someone played a note on his keyboard. In his full-fledged Mr Bean character, Rowan Atkinson was dropping the beat like a pro! Atkinson has always been a silent winner as Mr Bean and made millions laugh with his antics. Having to play only a single key recurrently on the keyboard throughout, a bored Bean was seen checking his mobile phone, his watch, managing to sneeze and wiping his nose without missing his note. He is also seen sleeping and dreaming about cheating to win a race on the beach. He wakes up to a shocked Simon Rattle looking angrily at him playing his instrument even after the performance has ended.

This sequence cannot be explained justly in words, maybe because Mr Bean rarely uses any! It has to be watched to have a taste of the grand combination of a quintessentially British event paired with a comedic genius. Rowan Atkinson is easily the pride of British comedy!

Arrival of the Olympic torch:

Speed-boating along the Thames came the very handsome David Beckham with a beacon to light the Olympic torch. The dazzling boat, lit in pink and blue, streamed smoothly as firecrackers simultaneously spurted on the riverside to welcome it. Five-time Olympic gold medallist in rowing, Sir Steve Redgrave, awaited torch-in-hand for the celebrated footballer. When the boat halted, Redgrave lit the torch and paced, running upstairs to bring it to the stadium.

Construction workers lined up on the sides and the spectators chanted in excitement, applauding in joy, as the British sporting legend made his way inside the stadium. This almost ritualistic ceremony is always a reminder of history; of ancient Greece where it all began. The man running with a torch in his hand held up high has almost become an emblem of inspiration for sportsmen and fans around the world.

Portrayal of the Industrial Revolution:

What left me extremely overwhelmed was the Industrial Revolution sequence — a perfect orchestration of one of the most significant centuries of history.

Smoke puffed out of flue-gas stacks and an unwitnessed nostalgia filled the stadium. Drums played loudly and people from many different countries and ethnic backgrounds could be seen moving to a 17th century Britain. British soldiers donning red coats paraded by as an array of blacksmiths worked arduously on flattening and channelling molten iron into a canal that led to a ring. Rich-looking British men, with cigars in their mouths and top hats on their heads, roamed about performing a zealous dance routine and miming shovelling gestures that depicted the industrial revolution immaculately. Soon the whole canal and the ring lit up with bright, orange (and, of course, fake) molten iron and the labourers stopped their rhythmic hammering. The orange ring rose up into the air as four other similar rings came together and formed the legendary, flaring Olympic rings.

I believe Danny Boyle outdid himself with this particular exceptional piece of direction. It stood out the most to me amongst all the other very exquisite sequences in the opening ceremony.

Other important events included the participation of boxing demigod Muhammad Ali, and, of course, the heart-warming performance by rock living legend (and my perpetual crush) Paul McCartney.

I’m not an avid sports fan but this opening ceremony has shown great promise and I hope to follow the Olympics this year!