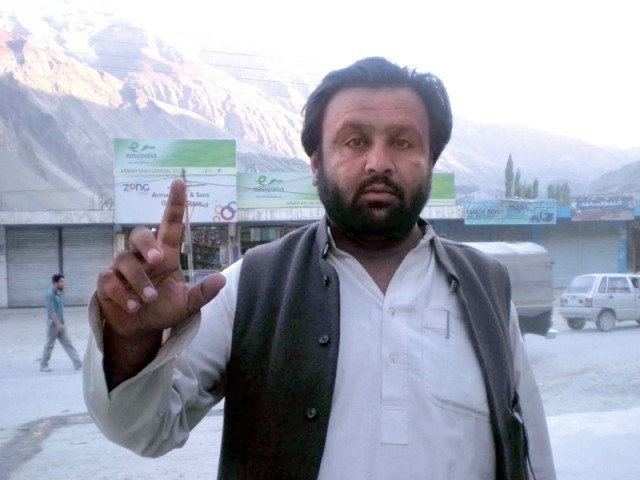 Baba Jan two more youth activists are detained in G-B jail for almost a year now; two others were only recently released on bail. PHOTO: FILE

One should read the story of Baba Jan Hunzai, if they’re still wary of claims that public administration in Pakistan, particularly away from Punjab and urban Sindh, is colonial in nature.

Baba Jan is a rights activist and leader of the Progressive Youth Front (PYF). He and two more youth activists are detained in Gilgit-Baltistan jail for almost a year now; two others were only recently released on bail. Their crime is agitation against the police for killings of a man and his son at a demonstration in August 2011. This was to demand due compensation for the affected families of massive landslides in 2010 that led to the formation of an artificial lake, now known as Attabad lake, in what used to be a settled area. A judicial inquiry had held the G-B police responsible for the two killings.

There has to be something very wrong with the law if it treats agitation for rights by citizens as a crime and equates activists to terrorists (Baba Jan and four other activists are charged for terrorism). To top that, the police have been extending judicial remand of the Hunza activists to date, since their arrest in September 2011 – denying them their right to a free and fair trial.

The idea of rule of law has been central to recent discourse on high politics and clash of state institutions in the country. Multitudes of bar associations, press clubs and traders’ bodies that were on the vanguard of what came to be known as the lawyers’ movement will have one believe that rule of law is a desired state-of-affairs.

In theory, rule of law is, indeed, central to the functioning of a democratic society. In practice, however, rule of law becomes problematic when law is used to discriminate between citizens on the basis of their ethnicity, occupation, religion or position within the federation. Such a law, then, is only a tool for the ruling establishment to maintain ‘public order’ as they define it.

Baba Jan and other activists detained in G-B will, therefore, beg to differ from those praising the virtues of rule of law in Pakistan. For them, and for most people who’ve dared to challenge Islamabad’s hegemony, rule of law has been a ‘dawn sans light’, to quote from Jalib’s idiom.

The demands for rights by industrial workers and landless peasants of Punjab have also been suppressed in the name of rule of law. Like the Hunza activists, powerloom workers of Faisalabad and tenant farmers of Dera Saigol farms in Muridke or Kulyana Estate in Okara have also been charged with the Section 7 of the Anti-Terrorism Act, for demanding fair wage and property rights to the lands they till, respectively.

The rule of law, however, has yet to restrain the likes of Malik Ishaq, and his Lashkar Jhangvi, from his ill-designs against a particular sectarian minority. The High Court of Lahore recently set him free, effectively sending out a message that the state considers Ishaq, who carries 70 murder charges, less of a problem to public order than rights activists and labour and peasant leaders.

People like Ishaq are just the tip of the iceberg of those on the right side of rule of law in Pakistan. The iceberg contains anyone with clout or bucks to manipulate the law; for Hunza activists, it is Islamabad’s colonial administration of G-B; for Faisalabad labourers it is owners of power looms and for peasants of Dera Saigol and Kulyana Estate, it is the influential Saigol family and the Pakistan Army.

For the most part, legal maxims like rule of law and maintenance of public order in Pakistan have benefited specific groups and interests. Their virtues have yet to trickle down to those on the receiving end of high politics, like Hunza activists. And if history serves any purpose, Baba Jan and other rights activists’ detention maybe lawful but it cannot be right, because as the saying goes, when tyranny becomes law, rebellion is a duty.