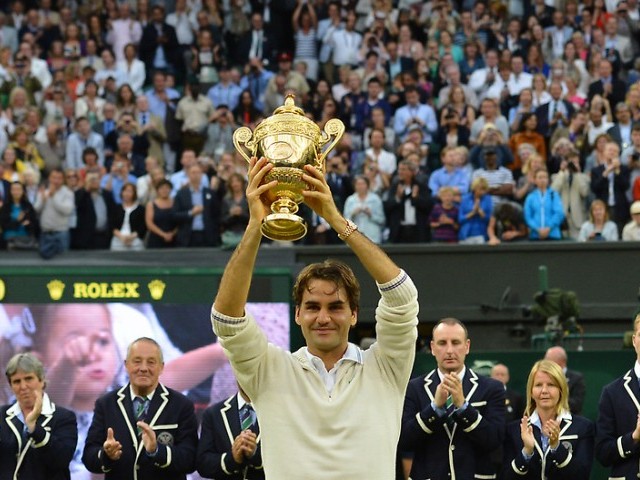 The US open, will test the mettle of Federer’s resurgence but for now the number one ranking and a 17th Grand Slam Trophy is locked firmly in his family cabinet. PHOTO: AFP

Wimbledon championships exude the kind of decorum, class and tradition that is existent to a far lesser degree at tennis’s three other major tournaments. For precisely this reason the third grand slam event on the tennis calendar is arguably the most prestigious.

The 2012 championships were no different, on the grass courts at SW19; some of the most eye catching tennis drama unfolded. From the ouster of Rafael Nadal in a shocking second round upset, to a troublesome back that almost floored Federer, it was edge-of-the-seat stuff.

Yet for the many fans of Roger Federer, the final moments of a two week long tennis gala provided immense joy and relief. As the tennis maestro from Basel recaptured his long lost throne and returned to the top of the men’s singles rankings.

Between 2004 and 2009 Federer won 14 of his 17 career grand slam titles. During this six year reign, he was the dominant force on all surfaces except the clay courts at the French open, where Rafael Nadal has traditionally been the undisputed champion. However, the all-round tennis capabilities of the Spanish power-house should not be undermined, as he also beat Federer at the Wimbledon and Australian open finals in 2008 and 2009 respectively.

A seemingly unstoppable deluge of mindboggling records and accolades came to an abrupt halt after the Australian open victory in early 2010. Men’s tennis was evolving rapidly and an ageing Federer was finding it increasingly tough to compete with a younger and more agile lot of players in Nadal, Novak Djokovic, Juan Martin Del Potro, Jo-Wilfried Tsonga and Andy Murray.

Soon his ranking slipped to number three in the world and that famed aura of invincibility became a distant memory. Nadal and Djokovic were now firmly battling for supremacy in the men’s game; between them they won nine grand slam titles post the 2010 Australian open through to the French open final in 2012.

Federer’s global legions of fans were also now starting to question the great man’s future in the game. Arguably the best player in tennis history could still win ATP world tour finals and the  Masters series 1000 events, but the chances of adding a 17th Grand Slam career title were getting bleaker by the day.

Given this chain of events, Djokovic and Nadal were being touted as the favourites to contest the final at the 2012 Wimbledon Championships. These are two young, super-fit and massively talented athletes who will probably one day better Roger’s seemingly insurmountable records.

Irrespective, Federer rolled back the years in a style that has always been so brilliantly regal. His one handed back-hand, a thing of pure beauty was working at its whippy best and the fluidly forceful forehand was dishing out winners at will. Once Roger tamed the world number one, Novak Djokovic, in a four set high voltage semi-final, a  17th Grand Slam Title was his for the taking and he did not disappoint.

The US open, later this year, will test the mettle of Federer’s resurgence in the men’s game. For now the number one ranking and a 17th Grand Slam Trophy is locked firmly in his family cabinet.