Does saying ‘Ramadan’ over ‘Ramazan’ make you a better Muslim? 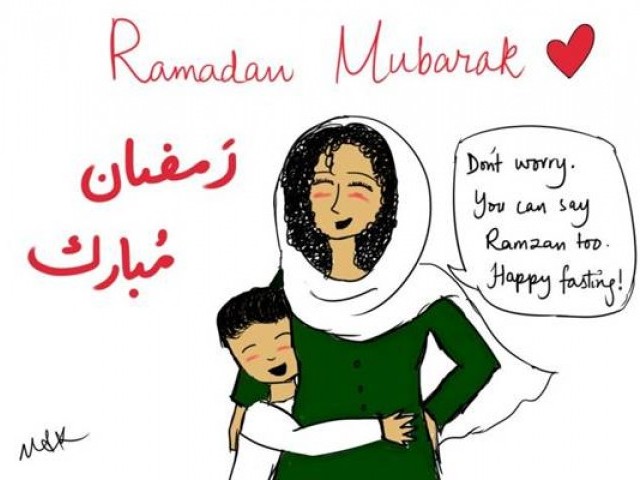 The debate in the social media centers around the usage of words for the month; the Urdu word 'Ramzan' and the Arabic word 'Ramadan'. DESIGN: MEHREEN KASANA

Since the last few years, the arrival of the holy month brings with it the ignition of a debate on social media in Pakistan. At the centre of this is the dispute over how to pronounce the name of this month; should we use the Urdu word ‘Ramzan’ or the Arabic word ‘Ramadan’?

Here are a few tweets regarding this matter:

You can call the holy month what you want. I’ll use Ramzan, rather than the corporatised, commercialised, Arabised, westernised Ramadan.

If you’re Pakistani say Ramzan. If you enjoy continuing Zia’s mission and being a lemming, please say Ramadan. #lemmings

Today we say use Ramzan, not Ramadan. Tomorrow it will be something else. Where will these social dictates take us? @bdutt

Those on the left side of this schism opine that usage of Arabic instead of Urdu words is a constituent of Arab cultural imperialism and religious rigidity in Pakistan. They comment sarcastically on how the country’s name itself should be changed to al-Bakistan then since the Arabic language doesn’t contain the letter ‘P’ in it!

Those on the right argue in favour of using Arabic words to maintain their ‘proper’ religious linguistics or to hold on to Pakistan’s Islamic heritage; they are even found ‘correcting’ peoples’ usage of the word ‘Ramzan’ to what they believe is more appropriate – ‘Ramadan’.

An article in Guardian titled ‘In Pakistan, saying Goodbye can be a religious statement’ on a similar Khuda-Hafiz/Allah-Hafiz issue, says:

Until about 10 years ago “Khuda hafiz”, which means “God protect you”, was the phrase commonly used to say goodbye. But, in the past decade, “Khuda hafiz” began to be overtaken by a new term “Allah hafiz.

While languages change and evolve with time, and Pakistan certainly has bigger problems such as corruption and militancy, the alteration has unsettled liberals in Pakistan, who say it reflects a wider change in the country’s cultural landscape.

The promotion of “Allah hafiz” first began in the 1980s under the rule of General Zia-ul-Haq when Pakistan was involved in the US- Saudi-backed jihad against the Soviet occupation of Afghanistan.

The belief that this ‘religious linguistic propriety’, which includes the introduction of ‘Allah Hafiz’ and ‘Ramadan’ in Pakistan’s lingual fashion, began with Zia’s campaign of cultural Islamisation does hold some truth. It has inevitably led to these (words, phrases) to be seen symbolic of the infamous general’s Islamification drive or ‘Saudisation‘ of Pakistan; which is the cause of many liberals and progressive-minded people objecting to their use today.

Although it is a question of precedence of subjects that needs to be reconsidered by them, because Zia’s ideological influence is at its most dangerous when it exists in our madrassas , mindsets and our constitution, rather than in mere words or phrases we use.

Despite that, it is important to realise that with the flight of decades, these words became incorporated into the nation’s lingo and style of speaking.

This happened in a manner that they are now viewed and used ordinarily; regardless of its background of Islamisation/Arabisation of the linguistic culture. This is particularly true for the younger generation of today who were either born in the 80s or grew up in an age where they were unable to notice the process of lingual transformation that was being attempted through a state-fuelled campaign.

It is questionable whether the application of a few phrases or words can be a testament to some rampant Arabisation of  Pakistan presently. To assume that all who like using the Arabic word for ‘Ramazan’ are proponents of degradation of Pakistan’s own distinct culture, lingual establishment and imposition of an Arab one, is preposterous.

Many use either of the words out of pure personal preference or habit. To be fair, Urdu as a language faces more threat of perishing at the hands of the colonial era inculcated sense of inferiority amongst us which has manifested itself in the ’Angraizi complex’, or the paramount significance that this society grants the English language over Urdu.

On the other hand, to believe that the occasional usage of Arabic words lends one more religiosity or ‘Muslim-ness’ is equally absurd. Those possessing this outlook need to review it, too, because respect for religion rests not in a handful of words but in actions, behaviours and attitudes.

Does addressing Allah as God make one a lesser Muslim?

Intentions behind uttering something and its essence is what matters most; words and expressions may differ.

The aforementioned points, thus, should validate how trifling the apprehensions and perceptions and their basis are for both of the groups. To be so vehemently opposed to the usage of either ‘Ramazan’ or ‘Ramadan’ by any, on the account of the stated views or any other reasons, is irrational and in contrast with good sense.

Let everyone have the freedom and choice to pick their own unit of language up, without forcing or prodding others to conform to each other’s self-defined mediums of ‘appropriate’ expressions.

The people of Pakistan need to stop making a mountain out of this molehill and quit attaching such alarmingly grand nature to it; of cultural foist and religious inaccuracy.

While Pakistan gets mired in troubles of far great and disturbing kind, debate over ‘Ramazan’ or ‘Ramadan’, only gives prominence to the penchant amongst this nation with its preoccupation with the trivial.