India: Who’s the fairest of them all? 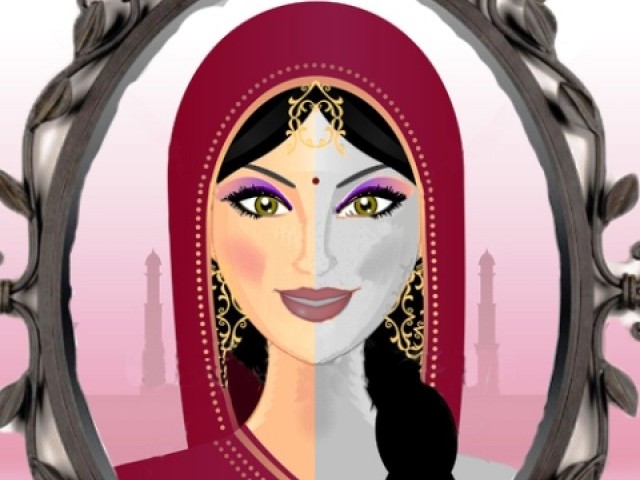 The ad that got the activists and social commentators’ up-in-arms was the one on vaginal fairness. DESIGN: ERUM SHAIKH

While I sat lazing one Sunday morning, I received a frantic phone call from a friend,

“My naani (maternal grandmother) thinks I will never be married!” she yelled.

Fairness was central to the lives of our older generations (I keep asking why that was, to no answers!). Even long before the British arrived in the subcontinent, the fairer among the Indians were well received in social settings and marriage markets. I remember my grandmother referring to her grandmother as being “as white as snow” (and hence being immensely beautiful). Therefore, the subcontinent has always been an easy target for big cosmetic firms as they can further an existing cultural bias and lure prospective customers into buying fairness products. Advertisements in Sri Lanka, Bangladesh and Pakistan compare little to the huge fairness market that India seems to posses.

There have been several commercials in India, over the decades, which have spoken about how young men desire women who are fair, and how fairness in women is a precondition to success. However, the ad that got the activists and social commentators’ up-in-arms was the one on vaginal fairness.

The ad hit the screens early March, but the shock and distress that it caused to bloggers and columnists alike is such that the matter is still kept alive on the blogosphere and twitter. Adding insult to injury, the ad-maker justified it in one of his columns for a popular weekly:

“The only reason I can offer for why people like fairness, is this: if you have two beautiful girls, one of them fair and the other dark, you see the fair girl’s features more clearly. This is because her complexion reflects more light.”

Why am I still not angry with him?

I understand the psychology of a capitalistic society which thrives on selling useless products to the masses. Such ads hold up a mirror to our society, the ad-man and the like are only feeding on the fodder that the society provides them with. Our responsibility as a generation that has inherited a deep-rooted bias, is to ensure that colour of the skin becomes nothing more than that – the colour of the skin, a biological factor that differs from race to race. The minute we link it with societal structures like caste and class, bifurcations of superiority and inferiority seep in.

While I was a student in New York, during our usual coffee table talks, a white American friend whispered into my ear,

“I hear men these days want women looking fair all over! I have stopped wearing a bikini to the beach!” she half-giggled.

Dr Sachin Dhawan, a well-known dermatologist and beauty consultant to many leading skin clinics in New Delhi and Gurgaon said,

We need to know the proper effect of such products that seem useless playing on fancy notions of beauty in the minds of women.

“Studies have not been conducted over many years to study if these have harmful effects,” she said, “so [they] cannot be condemned conclusively for any toxicity until proven.”

Considering vaginal whitening creams have just been introduced in India, I guess, we know what to expect next.