Social media is lying to you about Burma’s Muslim ‘cleansing’ 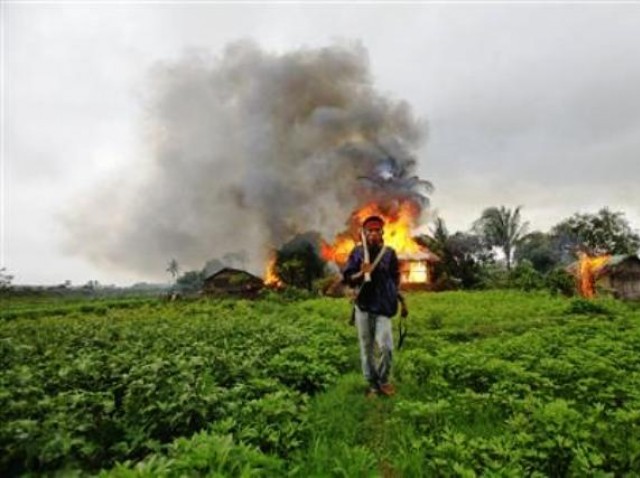 Don't you wonder sometimes, that the information we are being fed on daily basis can be untrue entirely or exaggerated to the point where it loses all its truth? PHOTO: REUTERS

Social networking sites are abuzz with news about Muslims being killed in Burma.You can see the sporadic posting of pictures by different people with captions like ‘Muslims killing in Burma’, ‘Muslims slaughtered by Buddhists in Burma’ and so on.

Thus, I took on the mission to sort the truth out for myself once and for all and researched some pictures that I felt were dubious. Below are a few pictures and their original copies. You can evidently see the gross difference between them and how they are thrown out of context.

I have found the original version which reads differently to the the one posted on the social networking site.

This picture was taken in 2010 after an earthquake in China and captures the efforts put in by the Tibetans to help rescue the victims. Now, Islamic political parties and some other elements are sharing this image as Muslim killing and their slaughter in Burma.

The original, as you can see below, is taken in Thailand in the year 2004. This picture shows protesters that were tear-gassed outside the Tal Bai police station in Bangkok. This is roughly 1,409.9 km away from Burma! What is grossly negligent about these photos is the factual ignorance of the hate these misleading photos can culminate.

Below, please find another image which was posted online, this time with an imprint of Jamaat-e-Islami on the top left . It reads ‘Terrorists of Budhism of Burma kills 500 Muslims’.

As you can guess, this is also a fabricated picture.

In reality, this image belongs to a Human Rights violation incident by the Thai authorities against the Rohingya ethnic minority of Burma. These refugees were detained for a few weeks and then sent off drifting into the sea.

Here is another instance of such fallacy spreading across the social media sites regarding the massacre of Muslims in Burma.

This picture is extremely misleading considering that the original image was about the riots in Thailand that took place in 2003!

Now, take a look at the image below and observe how it is blown out of context.

The original picture is not even remotely close to what the picture above states. In fact, a Tibetan protester had set himself on fire in protest prior to the arrival of Chinese president Hu Jintao and that too in Delhi.

I do not deny the killings of Muslims in Burma – not even for a minute.

I think it is horrific and I am sympathetic towards the immense loss being suffered by my Muslim brothers and sisters abroad.

What I am against is being lied to.

Imagine the amount of lies we are being fed through these pictures. How can one trust any image online if such drastic manipulation and editing is being done to cater to someone’s political or personal agenda?

Social media and networking sites, if used properly, can be an impressive tool in spreading awareness amongst its users, but it can be an equally dangerous median as well if misused.

These images are false and are only igniting hatred and prejudice in our youth.

We need to become more vigilant and aware of the credibility and authenticity of  pictures we browse through. It only takes one wrong image to push us over the edge towards extremism.

A tech blogger, Web Designer and Electronics engineer who loves to share his ideas. He works as a Technology Manager at XclueSIV Singapore and Tweets @imfaraz