All I ask for is two drops 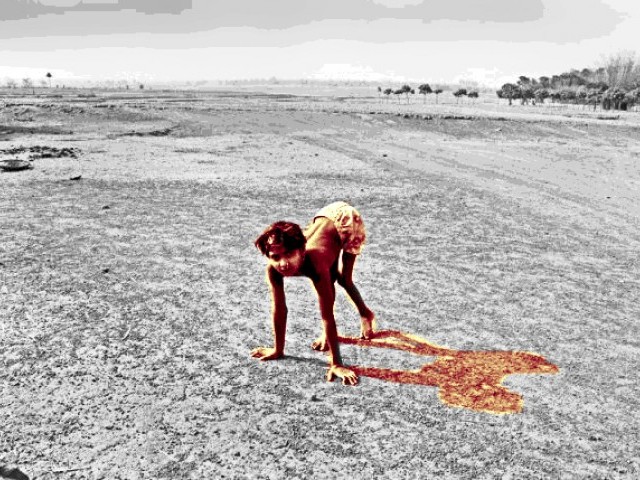 Lo, a vanguard of toddlers, whom warriors cower behind, we, the bucklers of the weak, a crutch for the feeble. DESIGN: ERUM SHAIKH

They whisper of demons that lurk in water
the secrets it holds, the lies

The oasis knocks at my door,
With the two drops I seek
But my water, I’m denied
By the whispers of the unknowing

Helpless before this treason,
Of whispers I cannot stop,
The word you utter is a plague,
The vengeful cackle of pox,

I thirst, I wait…

In the lonely hills of the west,
That sanity long forsake,
No water to be seen,
In the empty nest of my dove,

The oasis knocks at my door,
They’ve hidden away the key,
My water has been swallowed,
By the barrels of their guns,

Lo, a vanguard of toddlers,
Whom warriors cower behind,
We, the bucklers of the weak,
A crutch for the feeble,

From the smoke of war, it looms,
The bane of a dervish, a dream-eater,
The daughter of hubris and damnation
I lay paralysed, by fear and dread

The oasis knocks at my door,
But the wretched gale seeps through.