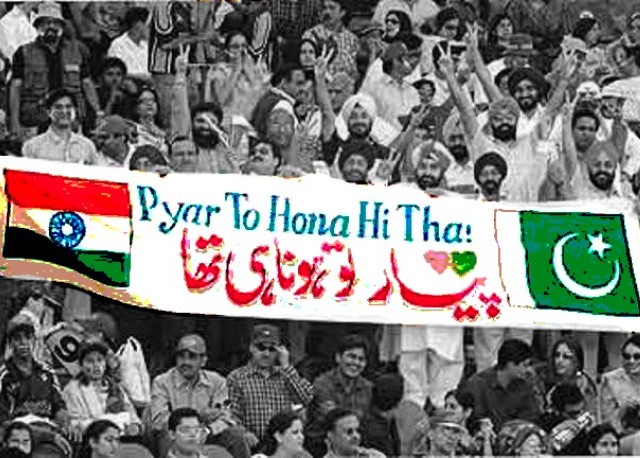 If two countries with one of the most intense rivalries in international sport refuse to face each other, world cricket will definitely be poorer off. DESIGN: ERUM SHAIKH

After four years of constant refusal to resume bilateral cricketing relations and giving Pakistan cricket the cold shoulder, the ice has finally started to melt. The Board of Control for Cricket  in India (BCCI) finally decided to restart the most intense cricket rivalry in the world, having invited Pakistan to play three One-Day Internationals and two Twenty20s in India later this year.

With bilateral cricket ties with India on hold ever since the 2008 Mumbai attacks, followed by the attack on the Sri Lankan team in Lahore in 2009, not to mention the 2010 spot-fixing saga and Pakistan being stripped off hosting rights of the 2011 World Cup, it was quite evident that the country’s cricket had been on a downward spiral for the past few years.

In recent times, however, the national team’s creditable performance has given the fans something to cheer about. However, the off-the-field realities are the ones that have continued to ensure that Pakistan cricket remains in the doldrums on many fronts, including the painful realisation that it would be many years before we are able to host international cricket and that the Pakistan Cricket Board (PCB) will continue to face serious financial problems in the foreseeable future.

In such a scenario, a series with India, even if it is not on home soil, will hopefully ensure that the severity of the financial crunch that the PCB currently faces will be alleviated to an extent.

However, beyond the obvious financial benefits that both the boards will derive from this series, we need to look at Pakistan-India cricket ties on a much broader canvas. If anyone doubts the importance of cricket ties between the arch-rivals to the health of world cricket, one only has to recall the high voltage, riveting contest that unfolded when Pakistan met India in the semi-final of the last World Cup, en route to becoming the world champions.

Top-flight cricket is played amongst a handful of nations and if two of those countries — which incidentally also provide one of the most intense rivalries in international sport — refuse to face each other, world cricket will definitely be poorer off.

Why this vocal outburst only against the resumption of cricket ties?

To all those who believe that cricket should continue to be held hostage to the wider issues between the two countries, it would be a good reminder that just five years after a bloody partition, which had engendered harrowing violence, bloodshed and extreme intolerance in its wake, 16 men from Pakistan went to play cricket in India.

Pakistan’s inaugural 1952 tour of India was held amidst a much more hostile climate that is prevalent right now. But it still ended up giving hope that cordial relations between the people of the two countries were possible and that maintaining sporting ties was one way of generating good will on both sides of the Wagah border.

It's not all Sami's fault