To hell with ODIs and T20s; it’s Test cricket that matters! 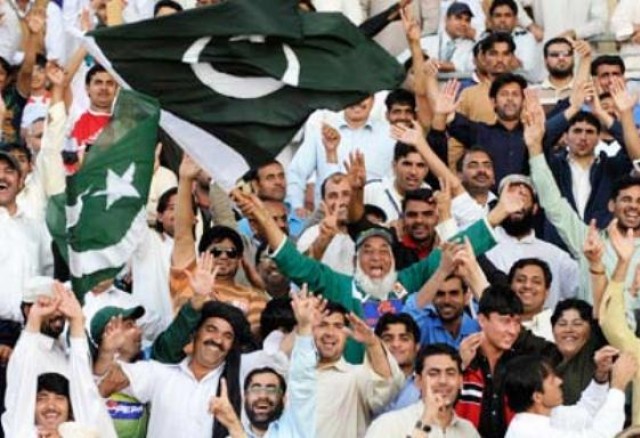 The barrier into the top four has been broken, and the potential shown by the Pakistani team indicates that it can do so much more. PHOTO: REUTERS

When the ICC made the annual adjustments to its Test team rankings to reflect the recent form, a couple of days ago, the Pakistani fans were in for a pleasant surprise. Pakistan was ranked at number four, which is the highest ranking it has achieved in the past five years!

There was a time when Pakistan was ranked third in Test matches. It was not that far back and till the first half of 2007 Pakistan maintained this rank, behind Australia and England.

When the annual revision came around in 2007, the new rankings showed Pakistan at number six – its lowest ranking ever in the history of the game, with a substantial gap of 27 rating points with Sri Lanka, the team at number five. 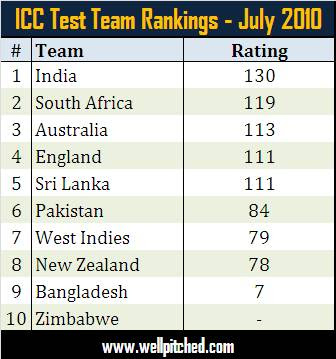 Since then, Pakistan has remained at the sixth position in the ICC Test rankings with the exception of a few months at number five.

The three-year period between July 2007 (right after the drop to number six) and July 2010 (right before the tour to England) was probably the worst period ever in the history of Test cricket for Pakistan. They played 16 Test matches during that time, winning only one of them; they did not win a single Test series during this period, both at home and away; their solitary win came in New Zealand in a series that was drawn 1-1.

In the summer of 2010, where Pakistan was to play Australia in a two-Test series and England in a four-Test series, in England, could not have been any worse.

Besides coming off a torrid three years of Test cricket, Pakistan cricket was in shambles with, then Chairman, Ijaz Butt placing bans on half the team due to allegations of misconduct on a tour to Australia (2009-10). Mohammad Yousuf, Younis Khan, Shoaib Malik and several others found themselves out of the team and at loggerheads with the cricket board. Amidst all this turmoil, Shahid Afridi, who had not played Test cricket for four years, was appointed captain of the Test team.

As if this turmoil wasn’t enough, even worse times were to come for the Pakistani cricket team.

That summer of 2010 will probably be remembered as the darkest period in the history of Pakistani cricket. The senior cricketers were banned by the board, the newly appointed captain resigned after just one Test match and the captain that stepped in was banned for ten years after the tour for spot fixing. The two most talented pacers to play for Pakistan since the two ‘W’s’ (Wasim Akram and Waqar Younis) also faced bans for spot fixing.

Darkest period is an understatement!

Yet in some strangely ironic way that summer of 2010 was also the beginning of the rise of Pakistan in Test cricket.

Pakistan repeated the winning performance against England at the Oval during the same summer despite losing the Test series 3-1; a loss that was to remain as the only one in the last 24 months till the series against Sri Lanka that was just concluded.

The spot fixing scandal, that rocked Pakistan cricket at the end of that series against England, might be looked back at and thought of as the time, when Pakistan cricket pulled up its socks and said enough is enough!

Misbahul Haq, who had been out of the team for about a year, was called back to captain a side that was in turmoil. The decision turned out to be a master stroke; controversy free, calm, and a senior cricketer who was well respected in the domestic circuit and among the junior cricketers who were looking to establish themselves in the international arena, Misbah was our man.

In Mohammad Hafeez, Misbah found a trustworthy lieutenant. Hafeez had been by Misbah’s side for over a decade in domestic circles, and now found himself playing the same role at international level. Along with Shahid Afridi, who was at the helm of the ODI and T20 teams, and the coach Waqar Younis, Pakistani cricket slowly started to pick itself up from the disgrace that it had faced in England.

It quietly went about its business, series after series; and before anyone realised it, Pakistan had topped a streak of six Test series without a loss and a 3-0 whitewash of the world’s number one Test team.

In the 18 months following the dreaded tour to England in 2010, Pakistan had played seven Test series without losing any of them. There were draws against South Africa and the West Indies, and wins against England, Sri Lanka, New Zealand, Bangladesh, and Zimbabwe.

That run of seven Test series without a loss was recently broken by Sri Lanka, but the two years of hard work that began (dare I say) at the start of that summer in 2010, paid off when the latest ICC Test rankings were released with Pakistan ranking number four – the highest it has ever been at since July 2007. 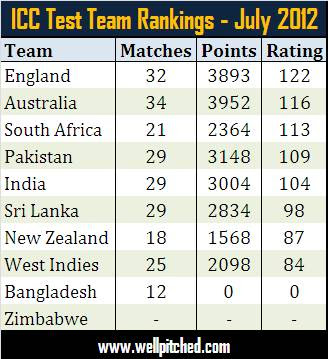 During the last 24 months, between July 2010 and July 2012, Pakistan has played a total of ten Test series – winning five, drawing three, and losing two. The two series that it lost were against England and Sri Lanka, opponents who Pakistan had defeated in Test series as well during this same period.

Moreover, Pakistan has the second best W/L ratio in Test cricket during this period, ranking a spot behind the number one Test team, England. 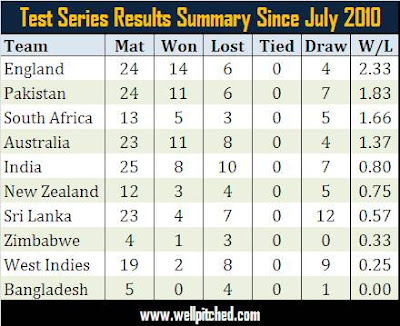 If England manages to beat South Africa 2-0 in the most awaited test series that is about to start, then Pakistan will find itself at number three (at the expense of the Proteas), behind England and Australia, which is where they were right before the ICC rankings revision in 2007.

Go England, you can do this!

Pakistan’s rise over the past two years has been nothing short of dramatic. After all, Pakistani cricket would not be Pakistani cricket without some drama. This sort of stability and continuity, in terms of captaincy and playing XI, was last witnessed in the mid-to-late 90’s, and was arguably the best era of Pakistani cricket.

It has not been an easy ride, and it will only get tougher going forward. This team still has to conquer England, Australia, and South Africa on their turf. Undoubtedly tougher challenges await Pakistan, but the new form has shown that it might not have the flair of the team of the 90’s, but it definitely has the will to fight and rise to the occasion.

For the first time in our lives, we can say, to hell with ODIs and T20 cricket, it is Test cricket that matters!

The barrier into the top four, which has been dominated by Australia, England, South Africa, and India over the past five years, has been broken, and the potential shown by this team indicates that it can do so much more.

If Pakistan continues to rise, it will make an even better story. But for now, we can relish the fact that we are amongst the top four Test teams and have claimed a stake at the World Test Championship, if it ever goes ahead.