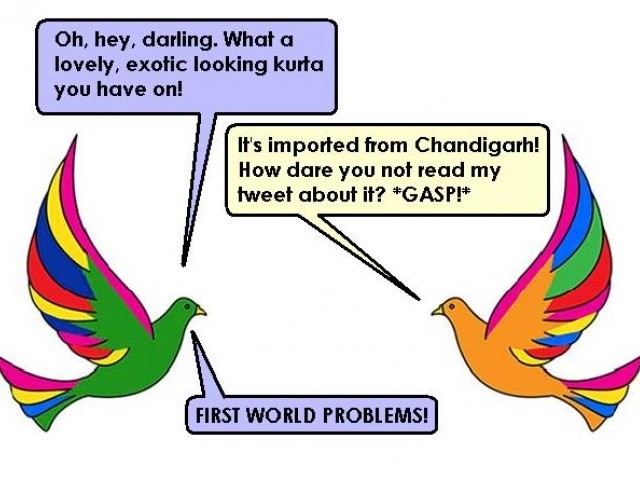 They were chatting and laughing loudly, complimenting each other any chance they could find at their grand kitty party. DESIGN: IMAAN SHEIKH

Yesterday afternoon, I was at the Social Media Mela, (better known as SocMM12) at Avari Towers, Karachi. As I neared the hall where the particular session I had to attend was to be held, I heard they were running late ─ and fashionably so.

When I first saw #SocMM12 trending on Twitter, I immediately thought of guns (let’s blame rap songs on the radio for this). When I found out what it really was and I took a look at the event guide online, I made a biased assumption; this wasn’t going to really be a broad-horizoned ‘social media’ mela; it was going to be one big tweet-up.

As I sat outside the Indus hall for fifteen minutes, awaiting the session, many people who looked familiar walked by. These prominently included a spectacled, curly-haired girl, who turned out to be Mehreen Kasana; and a woman in a gaudy, yellow kurta with a bindi on her forehead, who, to my surprise, did not turn out to be Marvi Sirmed.

Since the session I had to attend was delayed by almost an hour, I decided to attend Sana Kazmi’s ‘How I Got To Mohali’ session. Having heard her name on Twitter a lot, I was curious to see her in real life.

Upon entering the hall, I realised I was totally underdressed. Everyone else had suited up and here I was – hair unkempt, nose unpowdered, in my creased pick-anything-for-work outfit.

“So this is a tweet-up”, I said to myself, as I saw many prominent Twitterati in the hall.

Social media mela? I don’t know. I think it should have been called the ‘Indo-Pak Twitterati kitty party’ or the ‘Subcontinental Tweet-up’. And I say ‘Indo-Pak’ not because there were many Indians there, but because most Pakistanis were dressed like Indians. I thought they were from India until I heard them throw questions at the panel and tell them that they were Pakistani. Saris and bindis everywhere!

A way of welcoming our friends from across the border, perhaps?

With the exception of a few faces, all I saw was middle-aged, Twitter-savvy liberals kissing up to each other. They were chatting and laughing loudly, complimenting each other at any chance they could find. Some were seen looking like they we holding a very important discussion, but upon moving closer, one would discover that they were engaged in talking about something banal and obvious. In all, it looked like a kitty party of Pakistani elites who were friends and very active in the social media scene (just Twitter, really). They are often seen giving each other shout-outs on Twitter and inviting each other for dinners out of social media courtesy.

Sana Kazmi’s session went well. Although it seemed as though she had little experience addressing to an audience, I found her to be one of the most pleasant speakers there. It was quite an enjoyable half hour where she told about her amazing Twitter experience that landed her and her friends seats in the 2012 cricket world cup semi-final in Mohali. I’m glad I chose to attend this session because the one I was looking forward to ─ The Maya Khan Takedown: In Praise of Slactivism ─ had little to offer.

Probably, the only entertaining bit of the Maya Khan session was moderator Faisal Kapadia’s humorous remarks. The little enlightenment anyone got from it was points raised by Beena Sarwar. Occasional laughter was heard over Kasana’s comments, who I found to be as funny in real life as on her blogs. Upon being asked what we’ve gained from the Maya Khan takedown, Marvi Sirmed digressed into irrelevant details of unrelated things. After a good five minutes of incessantly telling everyone how she was suspected to be a CIA agent at age eight, she was interrupted by Kapadia to answer the real question. This did not stop her from going on another five minutes; only this time, it was a tad relevant.

A person from the audience I totally expected to raise his hand was Mohsin Sayeed. And, boy, did he have an agenda! He barely gave the panellists a break to respond and went on about how he thinks that slactivism targets are misogynistic picks. I don’t understand how this is misogynistic because the list includes Amir Liaquat and Mubashir Lucman, too. Saeed basically ordered everyone to point fingers at Kamran Shahid.

When I got done with the session, I moved to the refreshments section to see the speakers off stage and possibly talk to some ─ but for the most part, to grab something to eat! Of course, they were too busy talking to each other. A generally loud, jolly Mohsin Sayeed was seen hugging a confused, unwilling looking Sabeen Mahmud. A bunch of girls flipped their hair and occasionally talked in Urdu in their broken, made-up accents.

I sighed and moved forth to get my hands on some cinnamon sticks – easily one of the highlights of my day.