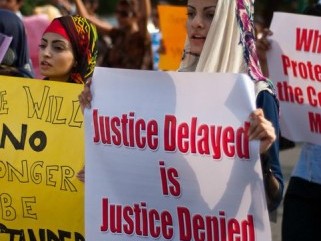 Crowds of supporters showed up to call for speedy justice in the Sialkot lynching case. PHOTO: AHMED SHAJEE AIJAZI

The Arts Council Karachi collaborated with volunteers from the Voice of the Civil Society (VOTCS) to hold a protest against the brutal killing of Hafiz Mughees and Muneeb Sajjad from Sialkot.

By 3.00 pm, a crowd of about 200 protestors had assembled in the garden at the Arts Council entrance, and despite the heat and mid-ramazan fatigue, the assembly’s zeal was palpable.

The place was dotted with students, fashionistas, educationalists and TV personalities, brandishing posters and banners inscribed with slogans for justice, and black arm bands to signify their unyielding disapproval of the tragic incident.

Veteran TV personality and VOTCS volunteer, Bushra Ansari kick-started the event by delivering an emotional rendition of the Sialkot tragedy, chastising every member of society for passively allowing violence and cruelty to go unpunished, and accepting injustice too readily. Bushra lauded the Chief Justice of Pakistan for his judicious inquiry of the matter, and expressed gratitude to the lawyers who had struggled for an independent judiciary. She appealed to the judiciary of Pakistan to grant justice to the deceased by initiating a ‘speedy trial’, as she did not want the nation to over look this brutality as it has forgotten other incidents of violence.

“I wish these people could be tortured and killed the way they treated those innocent boys,’ she confessed. “But that is not right way. The courts will bring these criminals to justice through an open trial, and if convicted, may they be hanged so it can set an example for others!”

The crowd shouted its support as enthusiastic protestors chanted ‘Speedy Justice!’ and ‘We want justice to prevail!’ while waving banners and placards, and clapping for the speaker who was emotionally charged as she expressed her anger towards MNA Firdaus Ashiq Awan. ‘We want Firdaus’ resignation!’ she cried as applause thundered through the listeners. “She has implied that these poor boys were thieves without any evidence to support her statement. Even if this was true, does anyone deserve to be punished by being tortured?” she asked as the crowd jeered at the MNA’s alleged statement and shouted its approval at the mention of a resignation.

Bushra went on to call the MNA an “unintelligent, stupid woman” whom she said waited a week before paying condolence to the victims’ family. She continued to criticize Firdaus Awan’s actions, deeming her a “tamashai aurat” who “clearly wants more fame as was obvious when she went to Sania (Mirza) and Shoaib Malik’s house in Sialkot when they arrived after their wedding.”

Fashion critic and editor of fashion magazine Prive Asia, Mohsin Sayeed took his place on the podium and calmed the crowd a few notches as he followed the National Anthem with a moment’s silence to pay respect to the deceased. He said that by virtue of being members of civil society, we must not indulge in violent behavior. He circulated copies of a letter drafted by the VOTCS, which was addressed to the CJP and respectfully demanded ‘exemplary punishment to the culprits that committed atrocity’.

Deputy Speaker of Sindh assembly, Syeda Shehla Raza arrived half an hour into the event and was requested by the organisers to share her thoughts on the situation. She announced that 200,000 flood survivors were coming to take shelter in Karachi, and urged the protestors to go home and donate whatever they could to the displaced persons. She explained that she was pressed for time as she had to attend to the influx of displaced persons and left the podium to leave the venue.

At this point, Bushra hurried to the podium and demanded that Shehla Raza comment on the Sialkot incident instead of ignoring it. The deputy speaker returned to the microphone and addressed the crowd once again, saying “I am here for the (displaced) people, but the courts will grant you justice because it is their duty.”

At her statement, tempers flared among the crowd and organisers as protestors shouted ‘Shame on the government! We want justice!’ repeatedly as Shehla Raza spoke. “I am proud that the people who used to sit in drawing rooms and discuss their support of a military dictator have come out to take a stand. I condemn the killing of the two boys and am aware of your protest,” she said as she signed a copy of the letter addressed to the CJP.

As Shehla Raza left the podium for the second time, Erum Farooq, president of the VOTCS openly voiced her displeasure at the speaker’s statements and clarified that Raza had not been invited by the organisers but had voluntarily attended the protest. She said that Raza was here to represent the views of her own party and had agitated the crowd with her statements.

The enthusiastic and charged crowd proceeded to march to the Press Club in protest, waving banners and posters while chanting slogans for justice. The protest came to a close at about 4.30 pm.

Personal note: Although it was a noble effort on the part of the organisers and protestors, it may have had more of an impact if members of workers’ unions and student associations had participated, instead of Karachi’s elite.