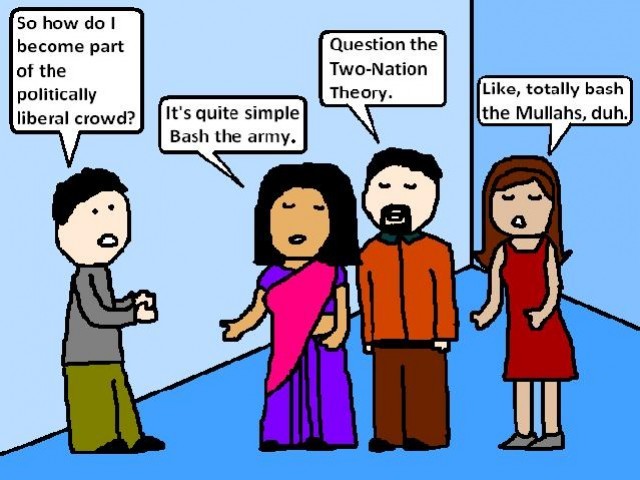 I have managed to devise a five-step approach for the layman towards becoming a liberal in Pakistani politics. DESIGN: IMAAN SHEIKH

For the past one year, I have met quite a few people who are termed in Pakistani politics as “liberals”. Personally, I find this quite refreshing as I am from the generation who grew up during Zia’s era; the generation which was mainly inspired by our armed forces and characters like Mehmood Ghaznavi.

However, based on my prolonged discussions with the liberals, I have managed to devise a five-step approach for the layman towards becoming a liberal in Pakistani politics.

This is the most important and basic step. You must question why India was divided and say that Jinnah’s decision was based on greed for power and a desire to rule over a separate country. You must also raise the question of the grave injustice imparted on the Urdu speaking people who migrated from India through such a divide.

Question Jinnah’s capabilities, his westernised demeanour and his disconnection with the masses. Throw a bit of Gandhi in the conversation and his love for secularism. Refer to the 1971 debacle of East Pakistan as an evidence for the defeat of the Two-Nation Theory. The idea is to question the creation of Pakistan here. These lines should give you a nice start.

Step 2: Bhutto was a genius and all wrong precipitated from General Zia:

This is another significant step. Zia created all the terrorists and encouraged extremism in the country. The hard line version of Islam implemented by Zia converted the country into an Islamic militant state. Also mention the tyranny of Zia towards Bhutto, who was, of course, a great leader. Mention Bhutto’s connection with the common man and his disdain for mullahs and his liberal lifestyle which promoted tolerance.

Refrain from mentioning Musharraf when talking about liberal lifestyles, but do mention him whilst talking about how dictators are always stooges of America. Don’t forget to say that Bhutto was a genius , and that he was hung because Americans wanted to punish him.

Oh, wait, scratch that. No bashing the Americans! Badmouthing Americans could jeopardise the liberal you are aspiring to be. This is something only advanced liberals can handle. I’ll be working on a guide to advance liberalism in Pakistan, too.

Please start with mentioning that all of the four wars were lost to India. Start with the Kashmir war  and blame Jinnah and the tribesmen for it.

Mention the 1965 war and put the blame on Ayub Khan.

Now talk about the 1971 war and blame the army and Yahya Khan for it.

Finally, shed light on the Kargil conflict and blame Musharraf for it.

After you have enlightened everyone about the wars, bring the Siachen conflict into conversation and question the motivation behind fighting India at such an expense. Raise questions about the enormous expense of the armed forces and the massive impact it has on our economy. The last nail in the coffin should always be the Defense housing schemes. That’ll be the glaze on your liberal doughnut.

Step 4: Stress on eradicating the Taliban and supporting the Baloch:

This step is sure to land you in the liberal circle. The idea is to blame the army and the agencies for the Balochistan situation entirely. Baloch people are deprived of education, basic healthcare and land resources because the army occupies them all.

Also accuse the army of not doing enough when it comes to eradicating the Taliban. The Taliban are tribal, backward, violent and crazy. Al Qaeda influenced maulvis should also be a part of this wipeout.

Remember, any mention of Kashmir is now totally out of fashion. This could instantly get you into the deepest far right corner of Pak politics or affiliate you with Islamism. Stick to something of this sort,

Kashmir is India’s internal conflict and, besides, Kashmiris want a separate state, anyway.

And, yes, do not forget this one,

Step 5: Bash the mullahs and the madrassas (religious seminaries):

This could very well be the first step. The only reason I am listing this step in the end is because the first four should give you a fair idea of the kind of audience you have. If you feel emotions are running high by step four, you can skip this one.

However, in a friendly atmosphere, start with the backwardness of mullahs. Ridicule Islamic countries and highlight the infighting amongst them to obliterate the Ummah concept. The idea of an Islamic republic must be countered with the following surefire crowd-pleaser punchline,

Which Islam? Sunni, Shia or Barelvi?

This marks the end of the mantra. Congratulations on getting your invisible degree. You will no longer remain a novice in the Pakistani liberal political scene.

A financial analyst with expertise in banking instruments which are heavily involved in economic down turns; a management consultant and a struggling blogger. Faraz is fascinated by the left 'wingery' in Pakistan and tweets as @feeraz_khan

The economics behind the Lahore Metro Bus Service

Afridi out, Farhat in? World, what's going on?