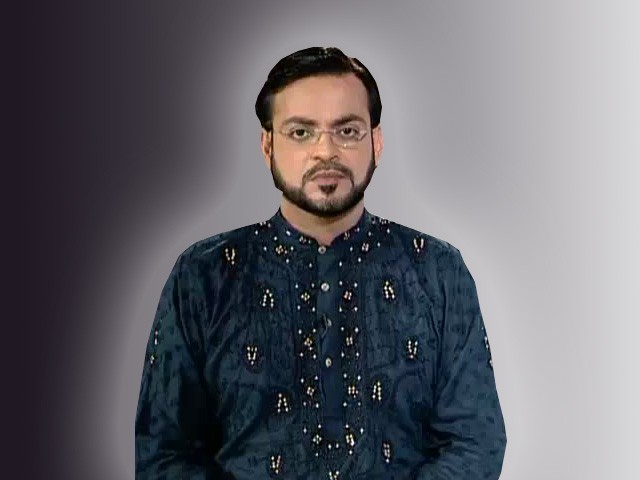 Flashy, flamboyant and witty in his televangelism, Aamir Liaquat is a burning bright spot in an otherwise drab landscape of mirthless religious pundits.

Remember when Superman lost his life in a war against the seemingly unstoppable alien, Doomsday, in order to defend Metropolis?

Except it turned out that he hadn’t really died and instead was actually just recharging in a Kryptonian regeneration mix for a few months so that he could return – fully alive and functional (notwithstanding that terribly embarrassing mullet).

Yes, the rumor mill got it right this time around. Liaquat, who has often fallen from grace in the eyes of many Pakistanis – mostly due to his systemic discrimination against religious minorities and a leaked video of the nation’s favourite commerical Mullah launching expletives and giggling at rape – will be returning to his original stomping grounds, Geo TV.

Since mid-June Pakistani Twitterai was abuzz with the Aalim’s possible comeback.

Equally abuzz was Geo which was busy shamelessly promoting the fact that ‘Someone is Coming’ by way of teasers, quarter-page advertisements, and this.

Undoubtedly, Geo’s apology and the reinstating of the Aalim, with much pomp and circumstance, is a score composed solely of dollar signs. Just the way you have to put forth the chocolate to have kids eat their vegetables, Geo knows it needs to put forth a tried, trusted and true honey trap which will guarantee that your Ramadan of samosas, lassi, and the Qasida Burda is complete. Geo’s Ramadan is mega-lucrative after all.

Like a UN Goodwill Ambassador helping spur Geo’s economy, he has returned to the very network he once alleged was responsible for leaking the much contested, expose-all video. Also, the same network from which he was let go following a broadcast in which he urged fundamentalist Muslims to kill members of Pakistan’s minority Ahmaddiya population.

Flashy, flamboyant and witty in his televangelism, Aamir Liaquat is a burning bright spot in an otherwise drab landscape of mirthless religious pundits. As our source flatly puts it:

Last year he did very well at ARY; and viewers thrive on emotion- he knows how to cater to that and he knows ke TV business ko kaisey chilana hai (how to run the TV business)”.

In an era of meticulously managed and manicured celebrity personas, Liaquat is a salacious mix of both.

First, he reels you in. Your eyes are drawn into whichever gaudy sherwani he’s decided to don that day. Then, the rest of you is sucked in too, as he begins, with bullet point precision, to lay down the (Islamic) law.

So what if his questionable off-screen persona  probably wouldn’t stand up under Sharia cross-examination?

He’s got the nation hooked on his dosage of flashy religion. Whichever TV network is featuring him doesn’t even have to do much to sell him to us viewers. Just like the three most comforting words,  ‘By Steven Spielberg’ on a blockbuster movie trailer, Dr Aamir Liaqaut with that 50’s coif and slim-cut, bejewelled sherwani is the most comforting image alongside your packaged Medina ke khajoors this Ramadan.

Geo knows this. So, naturally they are going to milk this cash cow dry. Cha-ching, jackpot.

However, forgetting Aamir Liaquat’s prior transgressions (fake degrees, profanity, racist bigotry) would be like forgetting what Ahab was trying to kill in Moby Dick.

Now to be fair, who knows what amount of authority he’ll be able to throw around as one of the  head honchos of Geo. Our source is equally unsure of the exact degree of authority but is of the opinion that there will be little impact on Geo News and more so on Geo Entertainment.

Regardless, all this has been enough to elicit a collective ‘Hawww’ from the majority of us confused bystanders who haven’t felt this flabbergasted in quite some time (which on a Pakistani timeline is, unfortunately, 10 days).

And it has been enough to warrant some drastic action on the part of some very unhappy people within the Geo network.

On July 1 the good folks at Cafe Pyala reported that:

There were also reports of an internal petition being circulated against Mr Jeem’s reappointment.

Today our source confirmed that Sana Bucha may possibly be leaving Geo. But as of this morning it was not yet confirmed whether Sana Bucha had tendered her official resignation – all that had been confirmed was that Maria Memon would once again be stepping in to host Sana Bucha’s Lekin this week.

“In Pakistani media, log kum hotay hain (there are very few people) and if someone is doing a good job usko (dusra network) utha leyta hai ( the other networks hire them). So this is not only about Aamir Liaquat. It’s about (Sana Bucha) getting a better deal and knowing she can while she’s at the top of her game,” said the source.

“One thing is for sure – the issue with Aamir Liaquat and her could be resolved,” the source added.

That folks, is only just one screw of a very large and dizzying merry-go-round that is Pakistani media.

What with the return of Aamir Liaquat, Dunya TV’s sacking of Mubasher Lucman, Sana Bucha’s alleged resignation, and Meher Bokhari erring on the wrong side of professional ethics, perhaps the only real way Pakistani media can entertain us any further is by way of a mass collaboration featuring all its past fallen heroes and heroines.