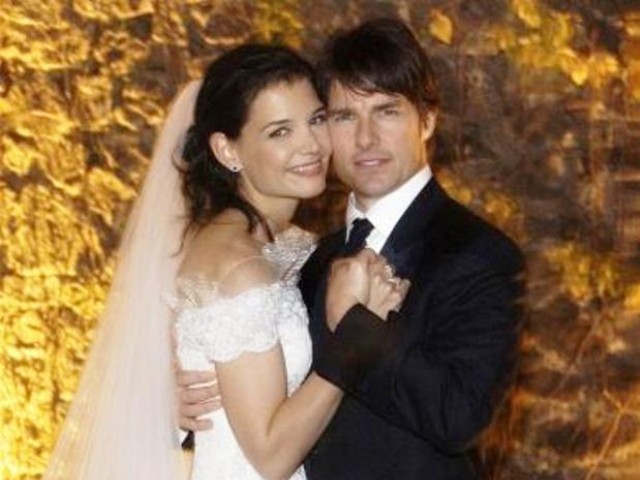 Since the divorce announcement, Tom has been hard at work filming, and Katie looks happier already. PHOTO: REUTERS

It hasn’t been a very happy birthday for A-list Hollywood actor Tom Cruise,

aka Thomas Cruise Mapother IV, as he turned half a century in his Beverly Hills mansion while the rest of his country prepared for Fourth of July festivities.

It’s not easy to maintain a straight face, even for an actor, when the world and it’s telephoto lenses are waiting to catch a glimpse of a wretched expression (after discovering one’s spouse has filed for divorce and sole legal custody of one’s beloved  and only biological child).

And then there’s Katie, who’s become a worn-down shell of her previous Dawson’s Creek-era good looks and playful spirit after marrying the Hollywood posterboy of Scientology. Can’t help feel sorry for both of them despite the $250 million they’re worth together.

Instead of being entitled to half of everything, Katie will only receive $3 million per year of her marriage to Tom according to the terms of their prenuptial agreement (and it’s been nearly six). Her settlement would probably split up their joint homes between them plus provide her with child support.  Now, if she’d chosen to stay married to Tom for more than 11 yrs, Katie would’ve received half of their $250 mil.  No gold-digger alert here.

A Roman Catholic originally from the Midwest, Katie never converted to Scientology but attended classes and had a Scientology chaperone.  So it’s not like she hasn’t tried to understand what all the fuss is about. Tom himself was introduced to the faith by his first wife, Mimi Rogers. His adopted kids with second wife Nicole Kidman had been home-schooled and raised as Scientologists.

Tom is considerably older than Katie and seems to be a bit of a control freak, though his attempts to rename his wife ‘Kate Cruise’ flopped. He also seems to have an overwhelmingly romantic side. Although it was kind of cool when he named one of his planes “Kiss me, Kate,” his impassioned trampoline-ing on Oprah’s couch plummeted him to public ridicule and almost cost him his career.

Tom has had an average of one wife per decade, and they’ve all seemed to have split up when they reached the age of 33: first Mimi, then Nicole and now, Katie. Although Scientologist couples seem to stick together despite shady massages ala Travolta, news reports suggest that Katie ultimately freaked out and filed for divorce and sole legal custody of Suri to prevent her impending enrollment at Sea Org, a lavish, orthodox Scientology boarding school.

However, a spokesperson for the institution said that children under eighteen are not permitted, and that the consent of both parents is needed for enrollment. Katie’s father, conveniently a lawyer, is a major source of support to her now, as her her newly appointed aides and bodyguards that have replaced the staff whom Tom appointed for her.

No Oscar buzz for Katie

At the time of TomKat’s initiation, it was said that Tom was on the lookout for a youngish actress to wed and that Keri Russell had been on the list too and refused. Now, while Nicole Kidman’s career had flourished as Mrs Cruise, Katie’s tanked. She seemed to be taking the wrong kind of advice—from Tom?—and made bad decisions like refusing what would have been her second Batman movie (the iconic Heath Ledger one), appearing in the ridiculous Mad Money, appeared in guest spots on TV and (as her wisest choice in the last few years), a Broadway show.

Katie became better known for her acting on the red carpet than on-screen, sometimes appearing robotic, other times morose; sometimes a fashionista, other times a gaunt marathon runner. But something was brewing, for sure, that led her to secretly rent an apartment in New York long enough to file for divorce from the state that prefers sole child custody to California, where joint custody is encouraged.

An adorable, six-year old, uber celeb Suri Cruise has a million dollar wardrobe and an enviable lifestyle which, according to tabloids, include her getting her own way and throwing tantrums. From high heels and kiddie Starbucks lattes (sans coffee, we hope) and late night dinners out to cupcakes galore, to clutching blankets along bare legs in chilly weather, Suri might be nearing her dad’s height but still gets carried around a lot, especially in Manhattan. She seems very devoted to both parents and, so far, has had no formal schooling other than dance classes with her mom, no bulky winter clothes, and no nanny in sight (at home is another matter).

Tall for her age, she has physical similarities to both parents as well as allegedly to the founder of Scientology, L. Ron Hubbard, according to gossip writers who have claimed that she was his biological daughter via artificial insemination of his 80s-era sperm.  Her parents have completely different notions on how they’d like to raise her and it all centres on the controversial beliefs of Scientology, which Katie never completely adopted, besides bizarrely referring to her daughter as a “woman” in an interview (Scientologists believe in treating children like adults, hence Suri’s late nights out and…lipstick?).

What Katie Did Next

Reports indicated yesterday that Ms Holmes filed an emergency application in New York, which means a hearing in an open court, accessible to the media and scheduled for July 17. Usually, celebs prefer to settle out of court, in privacy. Move over, Dawson. Katie’s playing hardball. As of today, People magazine reports that her lawyer denies this.

Since the divorce announcement, ever-professional Tom has been hard at work filming without even changing his schedule, and Katie looks happier already. But the Battle over Suri has only just begun. And with the paps going nuts over their conspiracy theories, it seems like it could take World War proportions.