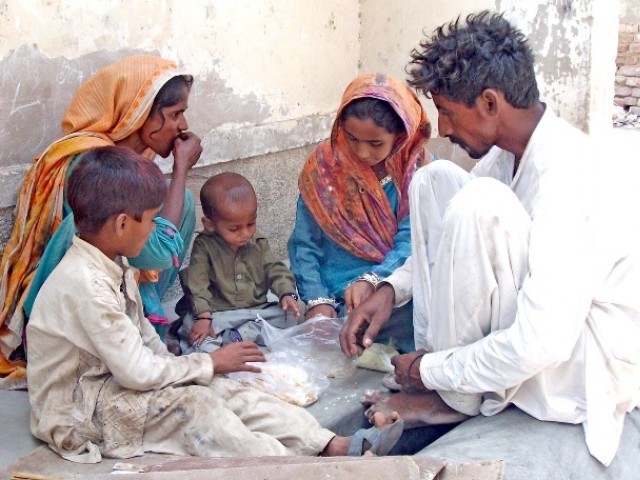 When there isn't any food on the table, the country's evolution as a democratic state ceases to matter. PHOTO: INP/FILE

A lot of cities of Pakistan are home to more people than the total population of some countries. Anyone who comes to this country for the first time is bound to be shocked by the enormous number of people on the streets. The closer you get to this flood of people in Pakistan, the more you cognizant you become of the harsh realities of their everyday lives.

Even though Pakistan is always on the news nowadays, – albeit for the wrong reasons – in the rhetoric of war on terror, religious extremism, drones and military operations, the plethora of problems that are faced by Pakistanis everyday just for sustaining their basic survival are left untouched and uncovered.

We live in a country where children as young as eight years of age ─ children who should be in school, enjoying their childhood ─ are responsible for taking care of entire families. When they desperately ask you to buy something from them; not just once or twice but at every traffic signal; at every corner and every street in every market; you start ignoring them after a while of realising the sheer abundance of the needy.

While you are ignoring these street children, you are also turning a blind eye to the fact that the same children are working inside people’s homes, while the sons and daughters of these elite are going to school. Can you imagine the pain that they go through when they have to wash clothes, serve dinner, or clean up after other children their own age?

If the plight of these children is not enough for people to see how deep the future of this country is in ruins, then we can look at the treatment given to elders who have spent their whole lives servicing this country. Having a feeble seventy-year-old man take your order in a restaurant is not the best feeling, however, it is one many of us have witnessed numerous times in Pakistan. They, too, are fathers like our own.

Pakistan is a country where many resort to committing suicide every day; where men kill their own wives and children because they are unable to meet their economic needs; where people have to pay thousands of rupees to buy a tankful of water – this is a country where uninterrupted electricity supply is not in the reach of the ordinary man. Here, majority of the population lives below the poverty line and people deal with one or another natural disaster every year. Not to mention, health and safety are never in the priority list of the government.

Despite all of this we still find the time to fight over labels; liberal, secular or Islamic; democracy or dictatorship? The truth of the matter is that the common man on the street has no time to care about these labels. He already has enough battles to fight and demons to face. To him, these labels are nothing but words. When there isn’t any food on the table, the country’s evolution as a democratic state ceases to matter. What good is this so-called ‘evolution’ when it has not been able to deliver to Pakistanis the basic necessities of life?

If you really want to represent the people, start by gaining their trust for the system; be their voice and address to the problems that affect them daily. In the rhetoric of using politically correct labels, we have completely lost sight of what actually plagues this country; it’s our own misunderstanding of what’s important and what matters. There are more important issues that transcend the boundary of liberalism or conservatism; right wing or left wing; democracy or dictatorship. These issues affect us all, no matter which side of spectrum we are on. Not to mention, if anyone dares to try to do something for this country, people will invest all of their energy into mocking, criticising and bringing him down, based on the yardstick of label differences.

If you don’t agree with someone’s solutions or ideologies, nobody is stopping you from doing something yourself. However, if only criticism and bashing were tools in bringing change, we would be a super power right now.

The author is a PhD student in the department of Political Science at University of Toronto studying International Security.

Does the death of al Qaeda's Yemeni leader change anything for the better?