A plea from a young doctor 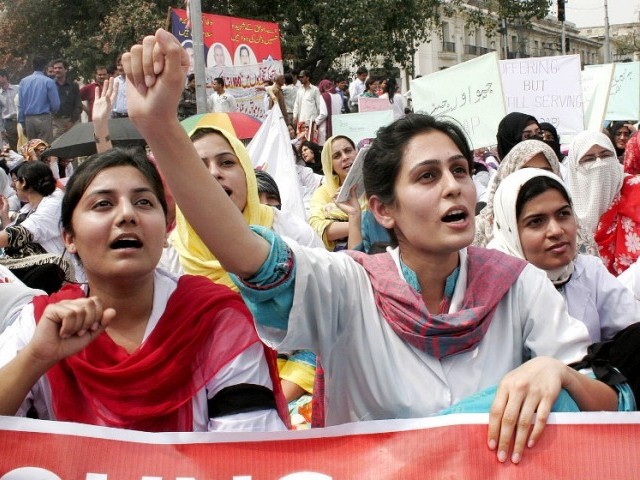 The intransigence shown by the Punjab government in this aspect is shameful, to say the least. PHOTO: EXPRESS

I do not receive any pay, perks or privileges for my job. I have to work 28 days a month with only two Sundays off. Every week, I have to perform emergency duties at least once for 12 continuous hours, apart from ward duties that extend up to 30 consecutive hours.

You guessed it – I am a young doctor working in a public sector hospital in Pakistan.

My colleagues and I are in the eye of the storm because of our demand to formulate a service structure for doctors. The same demand was made by doctors at the time when my father graduated form medical school back in 1980.

The attitude of successive governments has not changed in the slightest in the last 33 years. After last year’s protests, the government had promised to act upon grievances of doctors and that included the demand for a service structure. After countless committees and deliberations held amongst doctors and representatives of the government, a proposed plan was presented. However, it was rejected by the health department of the Government of Punjab in the end.

The deadline given by the government expired on June 7, 2012. Following that, seminars were conducted throughout the province by the Young Doctors Association (YDA) to enlighten the medical community about what the service structure is and why it is important.

In the third week of June, it was decided that until our demands are met, Outdoor Patient Departments (OPDs) will remain closed. This was meant to be a token gesture and not a full fledged protest because patients from OPDs could go to the ER – which they do a lot of times to get the required treatment.

Like last year, the electronic media went in an overdrive in their propaganda against young doctors and their ‘brutality’.

Despite getting bruised multiple times by the bitter truth espoused by representatives of young doctors, TV anchors and reporters went on defaming my profession and my fellow professionals. I must admit that in the last few years there have been isolated incidences in which some members of the YDA behaved rudely with people and there were instances of physical fights but that has been an exception, not a rule. It should not be forgotten that the same doctors closed OPDs last year and worked in tents outside their hospitals in return for no fee from patients.

The intransigence shown by the Punjab government in this aspect is shameful, to say the least. It has disgraced itself and its employees. Let me recount the tactics used by the state machinery in this whole scenario.

First came the threats; a notification was immediately issued which cancelled leave for all employees and emphasised that no one should abstain from their duty. In case of absence, arrest by the police was stated as a threat to doctors.

Then came the news that army doctors have been called in to fill in for us in the government hospitals. There was a deliberate misinformation campaign started by the Punjab government against doctors, portraying them as mercenaries. As proven by a representative of YDA, the figures given in those ads are totally wrong.

On Sunday night, a meeting involving the leaders of YDA was disrupted by the police and doctors were arrested. It was accompanied by vandalism in the doctors’ hostel in Services Hospital, Lahore. Some medical students were even arrested and various wards, including the ER, were thrashed.

After such appalling actions against us, doctors are thinking of shutting down the indoor departments as well.

The major questions being raised these days are:

1. Why are doctors protesting?

2. Should doctors go on strikes?

3. Why are people dying while doctors are not providing them stipulated services?

I have answered question number one in detail above. Regarding the third question, I will reiterate that closure of OPDs does not lead to any deaths because patients in a critical condition are attended to in the emergency departments of major hospitals. Isolated incidents in smaller cities should not mean doctors are simply not working at other places. The most important question is question number two.

Doctors, like other professionals, are also human beings. Doctors, like other human beings, also have needs and demands. If a whole year of protests and committees could not procure a change in the stances of the opposing party, what are we supposed to do next? Are we to start immolating petrol pumps and blocking roads?

I believe the smear campaign, started by Khadim-e-Ala’s government, should be countered by doctors- and they are doing so, as much as they can, by participating in talk shows. Unfortunately, we do not enjoy endless state resources to get ads printed in national newspapers nor do we have the ears of media personnel close to our pockets. What we can do is plea, and that is what I am doing.

My fellow countrymen, we are not the aggressors or brutes. We never wished harm for any of our patients. The only option left for us─ if the government does not accede─  is to either leave the profession or leave the country.

If you cannot help us with this, please do not start believing in the state’s propaganda without finding out for yourselves. That is the least you can do for all the services we have provided you in the past.