Spoiler Alert: Gangs of Wasseypur – real to the core 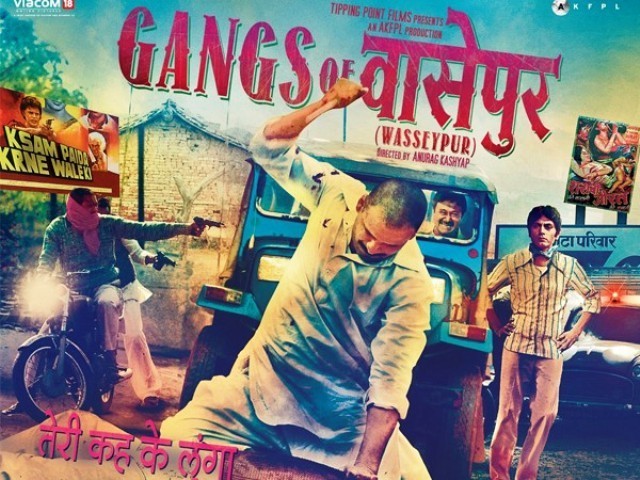 He is hungry and he is humorous. He is everything you don’t want your enemy to be but he is scared of his wife and admits that in front of his son. PHOTO: PUBLICITY

I have serious reservations against the terms ‘parallel cinema’ or ‘art movies’. These just confine some dazzling cinematic experiences to a select audience.

Why do people go to watch movies?

For romance? For great music? For action? For sex? For humour?

Would you go to watch a movie that has all the four?

You will call it an ‘art movie’ because it does not have a Khan or a Kapoor or a Kumar in it. Gangs of Wasseypur (GoWp), instead  has Manoj Bajpai in his finest performance ever. Yes, even better than Satya and that’s a lofty claim.

This film is a shut-up call to the word ‘parallel cinema’. It is purely commercial with everything a marketable film should be able to offer. Its romance does not have huge silk curtains flying in the background coupled with violins. Rather, it is the girl asking the guy to seek permission before holding her hand while sitting in front of a dirty lake. No, its action does not have shots of the hero jumping from Burj Khalifa or fancy car chases; it has gory action where fingers are chopped off and swords and daggers define weaponry. It’s sexy; not in a bikini-and-beach way but for the rawness of a man’s lust and woman’s quest for security in his lust.

Its music is fabulously done by the unique Sneha Khanwalkar (Love, Sex Aur Dhoka and Oye Lucky Lucky Oye) but it does not have lip syncing choreographed with hundreds of kids dancing along with the lead couple. Instead it has songs like Keh Ke Loon Ga playing in the background when the protagonist ─ if he can be called that ─ goes after the antagonist.

In fact, background music is the strength of GoWp jointly shared by Sneha and the brilliant Piyush Mishra. Both for performance and music, Mishra has started just where he left from in Gulal.

How fitting is a song like Ek Bagal Mein that expresses the feeling of one’s happiness along with sorrow in the background? This is like a man uncertain of celebrating the birth of his son when his wife dies during childbirth.

GoWP is not a prime example of fine story writing. The basic premise of ‘if a Hindu wants to rule, he must get two Muslims to fight with each other’ is subtle yet bold enough to raise eye brows. The story is a simple ‘karma bites’ saga where a son challenges the political powerhouse to avenge his father’s killing.

Although it might sound like a run of the mill 80’s revenge story or even The Godfather, rest assured that it is not. It also kills the rumours that the film has taken its inspiration from the Brazilian film City of God because it’s not that either. The only similarity between GoWP and City of God is the power struggle between two gangs. The milieu and the events are totally different from each other.

It’s the treatment and pragmatism that makes this film special. There can be a lot of criticism on making it an expletives ridden, violent, heavy 160 minutes, but the fact remains that expletives are as much a part of our lives as breathing is. You cannot expect goons of Bihar to talk to each other like cultured Lucknow literary geniuses.

GoWP also has a perfect cast. Every single character has come out with individual brilliance no matter how trivial his or her role is. It’s impossible to pick out someone who did not do well. The only differentiating factor between the actors is the length of their screen presence be it Jaideep Ahlawat as Shahid Khan or Jameel Khan as Asgar Khan or Reema Sen as Durga.

Richa Chadda as Manoj Bajpai’s wife is a surprise show stealer. Another surprise package is Pankaj Tripathy, who has gotten the biggest role of his career and has grabbed it with both hands. The talented story teller Tigmanshu Dhulia (Haasil, Shagird and Saheb Biwi Aur Gangster) puts down his pen and comes in front of the camera for one of the strongest performances in the film. His anger management and cunning is remarkable.

Piyush Mishra ─ the name is enough. Nawazuddin Siddiqui and Huma Qureshi are perfect in their roles and will get more exposure when the sequel revolves around them.

The film, however, belongs to Manoj Bajpai. From Bhiku Mhatre to Sardar Khan, take a bow. He is hungry and he is humourous; he is everything you don’t want your enemy to be but he is scared of his wife and admits to this in front of his son. He does not remember his father but he remembers the revenge. He is a mercenary with an objective of his own.

This is Anurag Kashyap’s finest work to date. He has overcome the criticism of using intricate metaphors (Gulaal) and unfathomable links (No Smoking) or making films ahead of their time (Dev D). He has kept the narration simple to make sure no one leaves the theatre confused. The killing scene of Shahid Khan reminds you of Bhikku Mahatre’s death in Satya. A powerful man can go down in a jiffy. It was Kashyap’s dream project and his passion shows in the entire film.

It’s important for the economics to work in favour of films like GoWP.  With satellite rights apparently fetching half of the film’s cost and a decent theatrical start in India, it looks like Kashyap has finally covered that bit which will also help the sequel of this film.