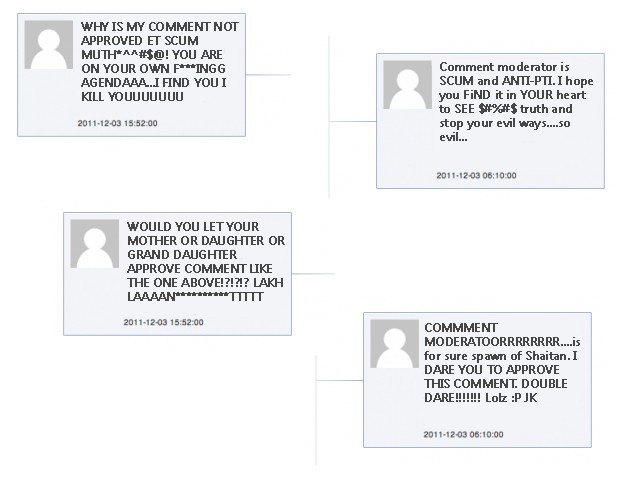 Sitting in front of the computer screen, reading all these frustrated rants and troll comments leave you drained of your own thinking capability.DESIGN: JAHANZAIB HAQUE

It’s 5:00pm. As people sign off from work and head on to meet their friends and family, I switch on the computer and log in to The Express Tribune comments dashboard. My work has just begun.

As cyber space gets ever more populated, you find words, more words and more words floating about. Everyone has something to say; gossip to share; an opinion to express; or just simply babble for sake of babble. It is no different on news websites my friends – you come across a similar craze of words there too.

As soon as a story is published on the site, the readers leap at it, thirsty to get their voice heard. But this voice does not come with an assurance of rationality. Many comments reek of foul language, racist remarks, religious or sectarian intolerance and character assassinations. This is where, as a comment moderator, I happen to enter the scene.

The “Approve” and “Trash” (comments) clicks make up seven of my waking hours six days a week.

Taking approximately over 500 comments every day, I can testify that people in our region simply love to talk. Hundred-word comments are a common occurrence and sometimes we get comments as long as 500 words! My soul blesses those who send in a one liner comment instead of an essay.

Sitting in front of the computer screen, reading all these frustrated rants, troll comments and of course, some value adding informed opinions, leaves you drained of your own thinking capability.

Some days we get to see a lot of scathing and harassing comments, and music is my way to counter the depressing aura that is generated through these comments. As my duty hours end, without delay I will hit the sack.

We have some regular commenters on our website, like Ali Tanoli, Mirza, Observer, Cautious, Zalmai and then some with funny monikers, like TightChuddi, Kaalchakra, Lala Gee, Hunter Punter. These commenters get involved in long discussions every day, not just on one news story but on several at a time. This actually makes me wonder how on earth do they have so much free time at their disposal? Perhaps they are paid for it?

Oh my! The conspiracy theory comments have finally begun to influence me.

Most hot debates in the comments section are on issues  like Pak-India conflict, Pak-US ties, terrorist/sectarian attacks, bombshells in local political arena, and, of course, the notorious Veena Malik. Most of the comments that are destined to the trash bin are attacks on religious beliefs, personal attacks on authors, or unnecessarily provocative comments by trolls. These comments, by the way,  can take up an entire blog space if I were to just focus on them.

I will share some sour comments that I have come across in the course of my job:

“I have just received a report that these five were uncircumcised, wearing saffron bands and carrying Kingfisher beer bottles in their backpacks” – Zaid Hamid.  (Story: Uganda detains five Pakistanis suspected of militant links)

Awesome. Oh, and above all, you get in a 100-something pages of the Holy Quran.

Why do we keep this junk in our country? We should get rid of all indian fisherman. (Story: Impending Handover: 315 Indian Fishermen to be released)

Of course, there comes a good share of some funny comments, too. Here are some of the funniest ones I have had the privilege of moderating:

Party chief Altaf Hussain is expected to make a “thought-provoking address” to women. In order to get through this trauma, women at the jalsa would certainly need to grow some balls.

Comments tell you a lot about the mindset of your readers as well─ more so on controversial topics.

When it comes to religion and women issues, you find the conservative side dominant but on sectarian stories, unexpectedly, you find an overall tolerant side at display. Often commenters also send in corrections and suggestions which, when forwarded to the newspaper team, helps improve its service. Moreover, the debate  that is generated leads to healthy exchange of ideas, such as the discourse below shows:

Max: Yes! Democracy is a process with responsibilities on the shoulders of each and every member of the society. It functions if allowed to do so, but if it is a war of personalities, or party vendettas, then I have some reservation about its survival in Pakistan.

afzaalkhan: I submit you should ask ur elected representatives to obey the law and they won’t be thrown out.

gp65: @afzaalkhan: “I submit you should ask ur elected representatives to obey the law and they won’t be thrown out.”

All this is extremely intense sometimes, and builds a psychological wave of pressure which is further exacerbated by the fact that it’s a do-from-home-job. No interaction with people you work for and the lack of emotional bonding with your workplace sets in feelings of being alienated.

As the title of Charlie Warzel’s article in Adweek conveys, it’s a ‘thankless job’. Those in for recognition and appreciation are not meant for this work. This is the absolute truth about this job of being behind the page at all times and taking heat from the readers for not approving their comments; I do have to read them before we trash the comments after all.

But I’ll have to admit, do-from-home-jobs have their positives as well. I get to dine with my family every night; I am able to watch my favourite shows on TV in tidbits as I can’t be away form the screen for too long; and I can save the travel fare which we all would like to do in this age of inflation.

What needs to be kept in mind is that the anonymity factor of the virtual world has the potential to take things out of hands, and hence, comment moderation is very necessary to keep things under control.

A student of Mass Communication at Karachi University who Tweets @Narjis_Fatema (twitter.com/Narjis_Fatema)

When six single women travelled from Karachi to Skardu

Why I chose Karachi University