How can you possibly ignore Veena? 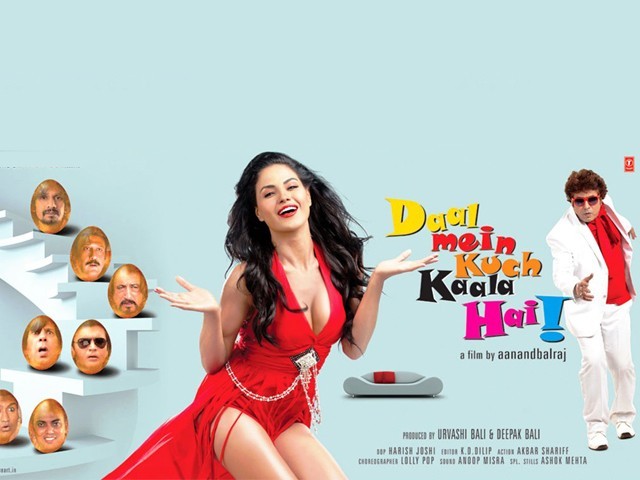 I'm sure controversy queen Veena will not disappoint us in her film. You may love or hate her, but can't ignore her! PHOTO: PUBLICITY

What do you get when you put two Veenas in one place? Well, I would say daal mein zaroor kuch kaala hai!

Not one, but two Veena Maliks are going to star in the upcoming film, “Daal Mein Kuch Kaala Hai”. Veena has been working on this film since her appearance in the “Big Boss” series on Sony TV. Playing a double role, Veena is to portray a sharp and witty woman that we’re all familiar with as well as a softer side to the ‘always-in-news-for-every-wrong-reason’ diva.

Dabu, having only the starlet on his mind, goes to her to win her over with his new found wealth. The sly Veena, though, is not so easy to get hold of. Instead of reciprocating his love, she devises a plan with her boyfriend to rob Dabu and elope. This, however, is  not a piece of cake for the couple and what awaits them is lot of twists, turns and a bumpy ride.

Then, another Veena Malik makes her entrance as a beautiful angel, taking the movie to a whole new level of comedy and entertainment.

Being in a film with actors like Jackie Shroff and Shakti Kapoor, Veena is adamant not to be overshadowed by all the stardom that tails these actors.

I have worked with big names; just look at the cast of “Daal Mein Kuch Kaala Hai” – but I am not someone who would stand in someone’s shadow.

With a number of catchy item songs like, “Mumbai Money hai” and “Madam Malai”, the movie is definitely worth a watch.

This Lollywood to Bollywood star is our very own pied piper; she marches on playing the tune that she likes and all the rest, willingly or unwillingly, follow her. Like her or not, it is undeniable that Veena hypnotises you and pulls you in her ever increasing list of followers with her grace, charm and masala-ridden stories.

How can you possibly ignore her?

This is one question that I am sure even Mufti Sahab would fail to answer. I am positive that with the increasing restrictions of PEMRA the movie is not likely to be showcased in any of our local cinema halls. Regardless, I am sure that many in Pakistan will watch her with ardent delight.

A Mass Communication student from Karachi University, aiming to become a journalist.

Don't let the dogs out at the University of Karachi