Once upon a monsoon in Khulna 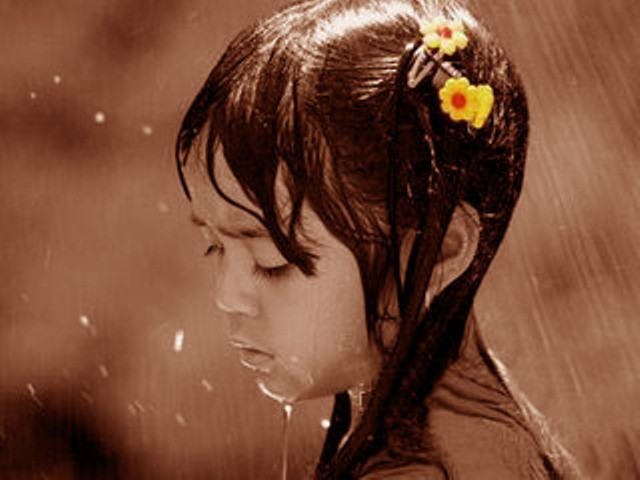 She prayed she would be rescued, "I will do everything they tell me, God! Please magically send me back home!". GRAPHIC: ERUM SHAIKH

“Sit still, Shona!” yelled an agitated Tara, washing her younger sister’s feet, “I will pour this water on your head if you move your feet again!”

“I am NOT Shona,” protested Naina, who was now six-years-old and did not like her childish nickname very much. “Leave me alone. Mashima washes my feet better than you, anyway. Somebody help me! Didi is trying to drown me!” she yelped.

The 400 yard house echoed with Naina’s routine bellows. Everybody knew that her daily tantrum had begun. Mashima – otherwise indifferent to Naina’s behaviour – told her to be quiet.

“Shut up! Can you not see I am tuning my sitar, you brat?” she shouted from eight feet away.

It was a sunny July afternoon in Khulna, Bangladesh. The garden smelled of last night’s rain and mango; freshly sliced and spiced mango that lay on bamboo sheets to dry so that it could be used to make pickle, murabba (mango preserve), and aam ka papad (mango crackers).

In accordance with the family custom, everyone washed their feet before coming to the table for lunch, and washing little Naina’s feet was an ordeal every day. Feet half cleansed, she quickly wore her slippers and began to run away from the porch. Despite her aunt’s warning, the rebellious little girl refused to have lunch and loudly announced her next destination:

“I am going to play under the coconut palms!” declared the spoilt child. “I hate your cooking, Didi.”

Her thanklessness fuelled her sister’s resentment.

“Fine, go away. That leaves more jaggery kheer for me after dinner”, said the sister, maintaining a calm tone. “But don’t go any further than the palms!” she warned, tucking the pallu (loose end) of her blouse-less mustard sari into her petticoat.

Bummed out, Naina sneakily gathered as many mango slices as she could from the garden and left. Her unkempt oiled hair and sweaty face glistened in the three o’clock sun. She wanted to be away from her family who she always believed was conspiring against her.

“I will stay out for hours so I can skip my class”, thought Naina, whose home-schooling had begun a month ago.

She wasn’t a fan of the family tradition of learning to play stringed instruments. Percussion was her thing. She was often found in the veranda, where she spent most of her time, dancing to her grandfather playing his tabla. The 70-year-old music aficionado often told her about her deceased mother’s love for music and dance.

“You are just like your mother,” he would say. “She found music in the sound of raindrops hitting leaves and danced to the melody they produced when they fell on our tinfoil roof,” told the reminiscing old man.

It made Naina proud.

Naina wandered for two hours, occasionally stopping to play with street children. It did not take long before she bumped into her friend Punit. This wasn’t surprising; Punit was always outside playing. The rain, sun, storm, nothing stymied this seven-year-old boy into staying at home.

“Are those mango slices? Give them to me!” he demanded.

“No! You look filthy. And why are you always shirtless? Clean yourself up and I just might share,” replied Naina, oblivious to how much she was like her family members, who she thought were nothing like her.

The lean-framed boy snatched the slices from her and ran. When she lost sight of Punit after a long chase, Naina gave up, resorting to sitting in a corner.

She was now in a marketplace where she had never been before. Everything was overpowering; the cacophony of a crowded bazaar, the stench of rotten meat, and the half-naked fishermen carrying baskets full of shrimp.

Then it hit her; she was lost.

She swallowed a dry gulp and was surprised by the sudden realisation of how hungry and thirsty she was. The young girl who was always being spoiled and spoon-fed now found herself without a hand to hold. Tears filled her eyes.

“Mashima, Didi!” Naina cried in panic and despair, clutching at her heart.

It was raining again. She struggled, creeping between the crannies of the congested bazaar, and came into the open, wiping her tears with her sleeve – her skirt now filthy from colliding with a pile of fish viscera.

She prayed she would be rescued.

I will do everything they tell me, God! Please magically send me back home!

Then she heard someone calling out to her.

“Naina!” cried her sister from just feet away – a look of anxiety on her damp face which was strewn with her dark, wet fringes; her sari now almost translucent.

“Didi, you’re here!” Naina screamed in joy, her throat still hurting from choking in tears and bitter from the taste of anguish.

“Oh, come into my arms, my Shona!” exclaimed the aching sister, embracing the apple of her eye.

The nearby river, expectant of a storm, seemed to subdue its roars and the melody in the raindrops had returned.

I will never force you to wash your feet again!