A sneak peak into Eidolon: A post-apocalyptic scenario 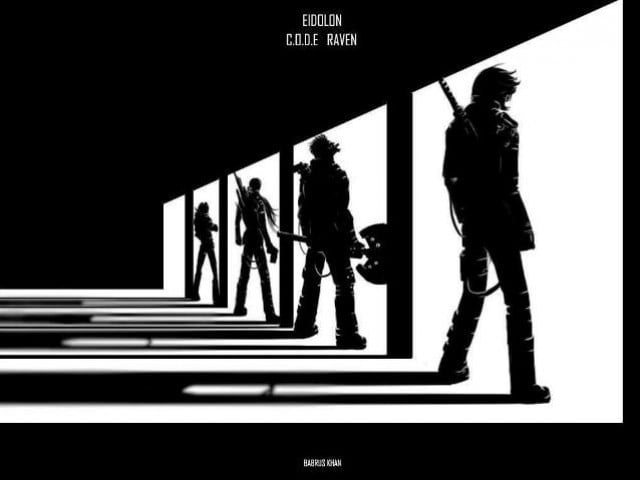 Kyle knows that he carries Belial, their messiah, and willingly serves his watchers. And day by day, his soul is consumed by darkness. GRAPHIC: BABRUS KHAN

A great nuclear war has destroyed everything, turning planet Earth into nothing but a radioactive wasteland. Long-lost history of the world hangs around in thin air like a myth. Mankind has begun to believe that the world was always this grey. There are no more countries, no culture and no such thing as religion.

But wait, I’m not narrating the script of some Steven Spielberg movie. This is the plot of my dream project, my comic– Eidolon, which means ‘an idealised person/thing or a phantom’.

It was in 2007 when I, driven by my inspiration for art, started working on a small comic to add to my portfolio and show it off to friends. But as good friends always do, they encouraged me enough to keep on going and make it something big. Many of them even helped me build up the content.

For you guys, here’s a peek into what Eidolon is. But, before you see my work, I’ve got one disclaimer: Originality was not what I aimed for when I began with the comic; entertainment was. It is something I enjoy and would like you to enjoy as well when it comes out.

In whatever mess the world is left with, cities and villages begin to emerge. But as the human race struggles to find the little-left resources, conflict between them arises. They fight over resources and their differences in beliefs by robbing entire towns.

From simple soldiers of fortune, they have now turned into structured mercenary organisations, who due to their excellence in war, are in constant need of conflicts and warmongers.

Among these organisations is Critical Operations Defensive Enforcers (C.O.D.E.), which not only excels in its soldiers’ combat tactics but is also in possession of highly-advanced techniques never before seen on the planet.

C.O.D.E is run secretly by a mysterious cult, known only in the deepest underground circle of the shady organisations known as the “watchers”. This cult has an ulterior motive, other than taking advantage from the war economy. They say that they have been living since the dawn of civilisation.

They have seen civilisations crumble. They have been pulling the strings ever since, setting the stage, waiting for their messiah – Belial, who dwells inside living beings and feeds on their hatred.

Belial will come to the world, claim it as his and will grant the gift of eternity to his followers. Secretly, patiently, the watchers wait for their lord, and they watch the world as they play with it. They watch just as they have been watching.

The watchers are waiting for Eidolon – the day of their lord’s awakening – and they know it’s not far.

A four-year-old boy, Kyle, who has known nothing but hatred in his less-lived life, is found by the watchers sitting in the wasteland among dead bodies of his tribesmen.

Kyle, the carrier of the messiah, is enrolled in C.O.D.E. as an elite soldier and works as a black ops agent trained by the very best of C.O.D.E. He knows that he carries Belial and willingly serves his watchers.

Day by day, his soul is consumed by darkness. He lives his life with no interests of his own. He lives on until Eidolon.

Like the watchers, there are those who have always been there to stop these Astaroths from awakening. They have been fighting an unholy underground war against watchers and other cultists. They have access to knowledge of spiritual nature, from which they forge their unholy shape-shifting weapons. They are the crusaders, who are even more secret than the secret cults that have been there for corruption. They are feared in the underground world and each agent works alone. They are known by the name of the ‘executioners’.

They have been fighting the crusade and one of the crusades is their search for Belial.

An executioner, David, travels the world – cities to cities, villages and camps in the wastes – to find that certain carrier. He can sense the dark energies, in the air of the decaying world that, the time is not far. He is aware that hunting down Belial won’t be easy but he is prepared for the confrontation. He is determined in his quest to stop Eidolon.

Cyrus, once an optimistic law-abiding citizen, who devoted his life to aiding others and always volunteering in causes for people, became a guardian enforcer at a young age. And after his exceptional conduct during various situations, he is moved to a more populated and problematic sector.

It is a huge city, made upon the ruins of once a city of wonders. Many of the existing buildings and places have been kept intact. After the establishment of this city, it was named ‘Karachi’ in honour of what was once a great city.

Cyrus is one of the high-ranking guardian officers of Karachi. He personally trains his men, and he personally goes through equipments assigned to his men to keep casualties to a bare minimum in times of crisis.

Karachi, one of the very few massive cities in the existing world, consists of three-tier population.

Tier one, being the most expensive and luxurious, is covered by a metal dome which simulates weather and nullifies many diseases. Much of the corporate circle is present here including the mercenary organisations C.O.D.E.

Tier two, is the city right outside the metal dome wall of Tier one. It is rightly facilitated yet is still suffering from less care.

And Tier three, the largest tier, is the suffering one – poor, sick and the most targeted area by the cults as the conversion rate is high among the poor, and so is the conflict rate.

Here we have come to the end of this blog, but certainly not the end of the comic. A lot of things remain unsaid. The comic may look very action-heavy at the moment but it is just the opposite. It has been made to touch moral, ethical values and to question several things.

But, the story has just begun and there’s lots more to be told. Expect the comic to be out soon.

Is an artist who started working at the age of 17 without any formal education in art. He was awarded Pakistans youngest art director when he was 21 and he now runs his own business managing national and international projects.