When in America, do as Americans don’t 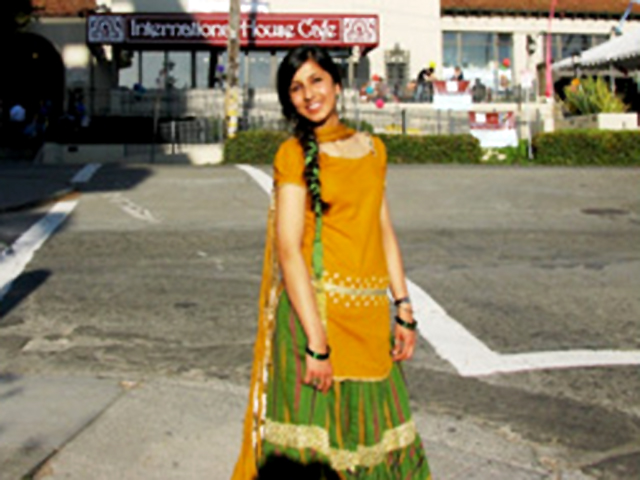 In front of the International House in Berkley, CA.

I was spring-cleaning my laptop a few days ago when I came across these two pictures. Normally, I wouldn’t have even noticed them buried in virtual stack loads on my hard drive, the blessing and bane of digital photography. But my general sense of awareness about “culture” and “identity” somewhat heightened of late, I paused to look, and was struck by the utter incongruity of it all. Not just the photographs, but of myself – in Pakistan, an English-sprouting, skinny-jean-wearing junk-food-eating, American Idol-watching “Westerner”, and in America, a jingly, jangly, Urdu-priding, chai-chugging, public transport-taking “Pakistani”.

I moved to California from Pakistan in 2007 to start graduate school at UC Berkeley. Though I had come as a student, I experienced much of what a new immigrant experiences – curiosity, bewilderment, loneliness, discrimination, independence, and – unexpectedly enough – a conscious need to re-affirm my “identity”. During the 22 years I lived in Pakistan, this had only occurred to me on a handful of occasions – cricket matches against India, for example, or when the enormous green-and-white flags appeared on 14th August, Independence Day, only to disappear a day later.

At the upper-class, English-medium, private university in Lahore I attended for my Bachelor’s, there was a course called “Pakistan Studies: Culture & Heritage” that we were required to take before graduating. Ironically, it is in this class that we were thoroughly “de-nationalized”. In this class, taught by a radical Marxist Yale-educated professor, we learnt there was no such thing as a “Pakistani”.

Then what was Pakistan? Little more than a project of India’s Muslim intellectuals, feudal elite and the British colonial government. The very concept of “nation-state” was foreign to the Indian subcontinent; it was forced upon us by the British, and Pakistan was the direct result. At independence in 1947, less than 10% of the people in Pakistan actually spoke Urdu, the national language; most spoke regional languages like Punjabi, Sindhi, or – Bengali! Yes, because Bangladesh used to be a part of Pakistan, until it seceded in 1971, which of course didn’t do much for consolidating our national identity.

Add to that the fact of the vast economic disparity in the country, 6th most populous in the world, where 1/4th of the people live below the poverty line and 54% have no basic education – I, who started learning English at age 4 and grew up watching Disney cartoons, had a computer at home ever since I can remember, ate out with friends every weekend at American Pizza Huts dressed in jeans and cute tops because that’s what was cool and shalwar kameez was something only our mothers wore or we kept for formal occasions – I was obviously the exception.

That is not to say I didn’t enjoy my culture, as I knew it. I loved it, yes; I loved my traditional embroidery, the block-print and mirror-work, the silver jewelry. I loved my home-cooked food, the grand weddings, the Mughal architecture, Ramadan and Eid, sufi-rock; but I loved it, like a visitor, like a curious traveler, collecting souvenirs, taking pictures. Pakistan was a colorful, exotic TV series, which I could switch on whenever I wanted, and switch off whenever the beggars and child laborers and hungry people came on.

My world was very different. Did I really know anything beyond it? No.

Then, I came to America, the place where what little “nationality” I had might have melted away completely. But quite the opposite happened.

I remember the funny warm feeling I got when I saw the first restaurant sign that said “Pakistani cuisine” in Berkeley (later to discover that desi or South Asian food was a local favorite and that there were hundreds of such restaurants all over the Bay Area). “Hey, that’s my place!” I would think with pride, and proudly order in Urdu, and tell him to make it extra spicy, because of course that’s what I was used to. I would stare at the food, my food, that all these foreigners, these Americans seemed to enjoy so much, mystified at the sight of them eating with their hands, tearing the naan into morsels and scooping up the bhindi or aaloo gobi – food so utterly commonplace that you couldn’t find it at even a roadside stall back in Lahore.

I felt a surge of joy at taxi rides, when I would invariably get a Pakistani or Indian driver (yes, Indian counted too, but that’s another complex affinity, another story). I would invariably smile at any man or woman I passed who looked desi to me – maybe I would talk to them at the bus stop or in a store – and how thrilled I was if they understood Urdu!

Perhaps the most bizarre thing was paying $20 to dance bhangra at a San Francisco club called “Rickshaw Stop”. A bhangra club? That didn’t make any sense! Bhangra was what guys did. They did it at weddings to live drummers, or in Punjabi music videos, or in the villages. You didn’t dance bhangra for any other reason. And how would a girl dance bhangra in the first place? Why would you ever even need a lesson in bhangra? It was all too confusing.

But when I saw what it was all about, I realized with a start: this was as much foreign to me as to everyone else in that room. This was bhangra? This incredible complicated aerobic gymnastic crazy sweaty choreographed performance that all these goras (literally, “white people”, but meaning any Westerner) seemed to be enjoying out of their minds?

Well, I decided I wanted in – I decided that this was mine, it was mine to own, it was Pakistani, and I could do it better than any of these goras because this is what we did back in Pakistan, didn’t we? And everyone believed me.

Why did I need to re-affirm my difference, my uniqueness, my identity in the melting pot? Why did I feel more Pakistani in America? I don’t really know. Is it because in this country, “ethnicness” is generally prized, coveted, glorified? Or, as a human being, you struggle to identify with a group because you find strength in groups, so you meet, talk to and befriend people you may never even have acknowledged back home – just for the color of their passport? Is that hypocrisy?

In Pakistan, I would never talk to my cab driver. I’ve never dream of taking a cab in Pakistan by myself. But here – it is a bonding experience. Here, I trust a desi cab driver over all others. He might have been a criminal back home, for all I know. But in America, it doesn’t matter. We are the same.

And sometimes I find myself thinking – if all Pakistanis moved to the US, we might actually be a nation – a much better nation! We would work hard, we wouldn’t have to bribe or take bribes to make our way in life, and we could communicate with each other, without suspicion or pretense or awkward social barriers.

But the question is, is it even real? Or do we find this strange affinity only because we stereotype ourselves to fit American expectations and tastes, shaking hands and serving them chicken tikka masala while pretending its “authentic”?

The last vestige of nationality probably lies in the accent. The moment people stop asking you what part of the world you’re from when you talk to them – you’re lost. You’ve become American. You drop your T’s. You’ve successfully “assimilated”. And for this confused “Westernized” desi, for whatever illogical irrational reason, that’s not a compliment.