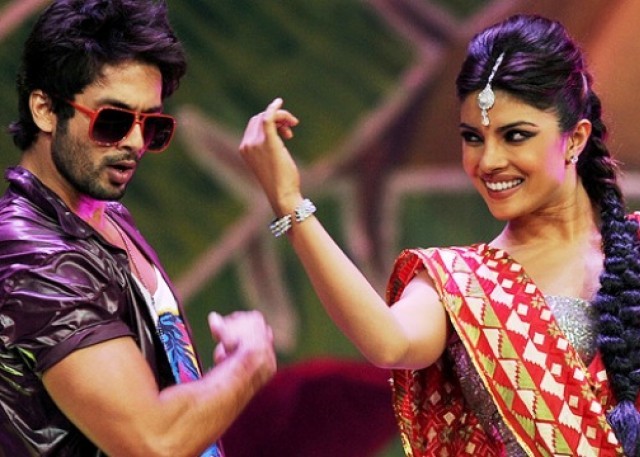 The chemistry between the two actors was decent - surely nothing that would blow you away. PHOTO: AFP

Fancy a romantic Hindi flick? Go watch the latest Bollywood movie Teri Meri Kahaani, where the dashing Shahid Kapoor and the gorgeous Priyanka Chopra enliven the characters penned by Kunal Kohli. There are no guarantees, however, that this film will provide you with much entertainment though.

Kunal Kohli has handled both hits and flops in his career as a filmmaker. Hum Tum and Fanaa are examples of Kohli’s extraordinary work to date.

His new film, however, fails to deliver the same extraordinary brilliance.

Initially, the majority of the audience presumes that the story of Teri Meri Kahaani revolves around the concept of reincarnation. However, the leading lady Priyanka Chopra has clarified that the film is not based on re-embodiment and is, in fact, a love story of three different couples in three different eras.

Most people who have watched the film still believe the contrary.

The idea of three love stories spanning over three eras might seem interesting to many, but Kohli has failed to explore it to his merit and left his audience a tad bit disappointed and confused.

The treatment of the film is quite interesting.

Part one is set in the 1960s in which Shahid Kapoor plays the character of Govind, a musician, and Priyanka Chopra plays Rukhsar, a popular film actress. From body language, to props and costumes, the two characters seem to have been inspired by the legends of Indian cinema, Raj Kapoor and Mumtaz. To an extent, this part of the film has a very Chaplin-esque, silent cinema feel to it. The sound effects are somewhat funny and similar to those used in the Looney Tunes,  but they happen to fit in with the theme remarkably.

The second love story is set in 2012, and the leading actors play Krrish and Radha respectively. To my disappointment, the storyline of this chapter is almost the same as the former part with the addition of the two love birds now having social networking accounts. It seems that Kohli, once again, failed to explore the diversity evolving over a change of eras. Although the enactment of this part of the story is in accordance to the present time and space, it isn’t potent enough to grip its audience.

The third love story is set in the year 1910 where the couple take up the roles of Javed Qadri and Aradhana, who portrays a Punjabi kudi in the city of Sargodha. This part was much liked by the people of Punjab and Shahid Kapoor’s entire get up as a Punjabi was highly appreciated. This chunk of the movie was lengthy as compared to the previous two parts. The most interesting element of it, hands down, was Javed’s poetic attitude. The character instantly became a hit amongst the audience with his charming delivery of verses, good looks and a flirtatious charm.

Having said as much, the idea behind each phase in the three tier love story was more or less the same. This came across, unfortunately, as lazy and uninspired.

Shahid Kapoor’s acting has been lauded especially for the character of Javed Qadri. Cinema halls echoed with applause at his performance here. On the contrary however, Chopra’s performance unexpectedly remained below par. Her fans surely missed the diverse Priyanka from 7 Khoon Maaf and the strong and bold girl from Fashion.

The chemistry between the two actors was decent – surely nothing that would blow you away.

“Mukhtasar” is probably the only song in the film which gathered some appreciation from the audience. The rest of the music was pretty mediocre.

The film, unfortunately, falls flat because of its poorly developed plot and storyline. It offers nothing refreshing to the public, but is indeed worthy of a watch for fans who have been wanting to see Shahid and Priyanka perform together.

An associate producer and researcher in Express News who Tweets @PareesaZareesa

The good, the bad and the ugly of Coke Studio episode 3