And then there was light, thank you WAPDA 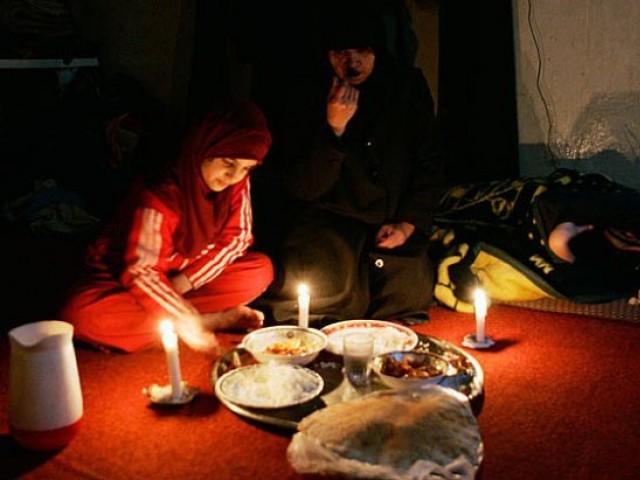 Perhaps, it’s better if WAPDA doesn't supply electricity at all. Why trouble these electrons? SOURCE: REUTERS/FILE

Thank you, WAPDA; thank you for these two hours of continuous electricity. I was about to blow out the candle and go to sleep Santa ─ you like being called Santa, right? Considering you love to shower us with unexpected electricity flow as presents when you feel like it. So, in return for this generosity, I thought I should probably write you a little thank you note.

I know I have been a bad boy lately, going to bed as late as eight when it’s already dark by six, but then it’s your laxity that’s to blame. Why supply electricity for two continuous hours when you are not even required to? But then you are not responsible for this either, it’s the whole ‘system’ I’m guessing.

Building brick houses, digging canals, tilling land, using iron tools, wearing clothes, and buying computers and appliances running on electricity should be demolished! We have to save electricity. Oh, the nerve we have!

Where are those stone axes our venerable ancestors hunted rhinos with? Where are those heavenly gardens our goats grazed on? I don’t know how to put it, but you make it really difficult to believe that I didn’t vote for a Salafi party. Take it for the compliment it is. It’s better that way. The popular support is with you after all.

Now, it’s very unfortunate that you are deaf in both ears; otherwise you would have known how strongly people feel about you. They are burning public property and blocking roads to accelerate the pace. And that’s what I mean. They are trying. People are trying to make your job easier.

Now, only a couple of days ago they burnt a train down. A ruddy train! Good riddance, man!

No more trains, those dastardly symbols of British imperialism; we’ll ride elephants, camels and horses, like a boss or a Mughal.

And for all that’s worth, I am playing my part, too. I will soon place an order for five maunds of mehndi (henna). You know the cooling formula that Head & Shoulders and Clear apparently have, only keeps Shahid Afridi and that tennis guy cool. Trust me I have tried both these shampoos. It’s the mehndi that does the trick for us.

In a few weeks, if the situation remains unchanged, I might even set out for Balochistan with a camel caravan to buy baggy robes and some chappals (slippers) made of tree bark.

Why baggy robes, you ask? Well, imagine this;

Scene ten seconds before the electricity supply is restored:

The actor, drenched in sweat, with his arms and overhanging wizardly sleeves- his tired face directed at a pedestal fan, or, preferably, a water cooler. And ten seconds later, it’s a visit to heaven; not for long though. Not for long.

An hour later, it’s back to being swarmed by mosquitoes and houseflies. And this is why Wapda, I like to think of you as God’s helping hand. You test us and you reward us, though very arbitrarily.

Just yesterday, I woke up at 4: 50am to find myself in a terrible state of life. A fly was buzzing around my nose trying to gain an entry only to be stopped by my dense moustache. I lay there for the next ten minutes in anguish and agony, not inquiring ‘could this be life?’ and ‘what had I done?’, but rather incanting ‘thou, only thou art my saviour’.

And then there was light! You sent an army of electrons, billions upon billions, deployed around my house for one full hour ─ that’s, like, 60 minutes, and if you do some maths then it’s literally 3600 seconds!

You drove away those annoyingly stubborn mosquitoes and I had no choice but to do my devotional victory dance, this time around in bunyan (vest) and shorts.

On a serious note, these violent campaigns are not very effective. Once the electrons retreat, the little Draculas are back. And how very disconcerting it is. I have found my brother, a capital fellow otherwise, muttering explicit mantras in your glory. I wished I had the required amount of innocence to be unable to comprehend his otherwise, fair ode to you.

Perhaps, it’s better if you don’t supply electricity at all. Why trouble these electrons to begin with? Give them a good night’s sleep, instead of sending them every three to four hours here and there. It’s good that way, don’t you think?

People will shout, but they like shouting. Just look at my father for instance. He wants to get a generator because the uninterruptible power supply (UPS) doesn’t work anymore. He indulged himself in an hour-long rant over it, too. But when one has as much money as the amount of shame you have Wapda, well then, Godspeed.

The love I have for you, Wapda, can’t be expressed in mere words. For me, ‘you are the truth, the way and the life’.

Like a messiah, you have prepared me for my future, and if I be allowed to quote certain Sindhis:

(People travelling from Sibi to hell should take warm clothes with them).

What incredible amount of hubris must be strewn into one’s DNA to make one deny that thou hast made our lives Sibi? And Sibi, my lord, is, and will always be, one better than hell.

A final year year engineering student, a history buff and a proud Lahori who tweets @shayasud.