Democracy in Pakistan: Keeping the faith 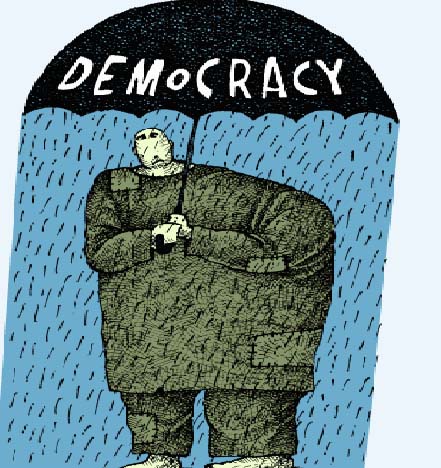 PPP, PML and ANP might not be ideally democratic, but they are part of a system that is going through evolution.

Everyone is criticising democracy and ‘corrupt politicians’. From the media to those who are part of the so-called corrupt government and people in the opposition, everyone wants ‘sincere military generals to save the country from the corrupt politicians’.

I have heard some people argue that the people of Pakistan are not ready for democracy and only a dictator can handle this mob of ‘illiterate and unorganised people’.

I agree with the MQM, Imran Khan and Pir Sahib Pagaro. The present government is corrupt. It is not following democratic norms. Governance is not visible. Prices are rising by the day. Thousands daily circulate messages criticising the present government. And as critics rile against the setup, I start praying for another general who would ‘safeguard Pakistan’.

Yet, I have to ask myself, even if the politicians are corrupt, how much of the country’s finances are they managing? President Asif Ali Zardari and company only control 25 per cent of the country’s finances. The remaining 75 per cent is with the military. The “bloody civilians” might be corrupt, but they at least deserve to be given their five years before we start the accountability.

We also look at Western democracies as case studies. But interestingly, we don’t study their histories. Democracy in the West became strong through an evolutionary process. Our “bloody civilians” have yet to learn. If we want to progress we will have to be patient. Nations are not made in hours and neither can democracy be strengthened and ‘purified’ through military coups.

So just before I fall asleep, I decide to support the “bloody civilians” and their corrupt government. I might not be able to see Pakistan as a strong nation while these corrupt people lead, but I am sure, 40 years from now, my children will see it.

PPP, PML and ANP might not be ideally democratic, but they are part of a system that is going through evolution.

As a case in point, my mother did not let me buy clothes for myself while I lived at home. Since moving to Karachi, I have started shopping for myself. She scolds me for paying too much for what she calls bad quality clothes. I argue that she never gave me a chance to learn.

Peshawar based reporter for Mashaal Service of Radio Free Europe.

Why do pickpockets go scot-free?