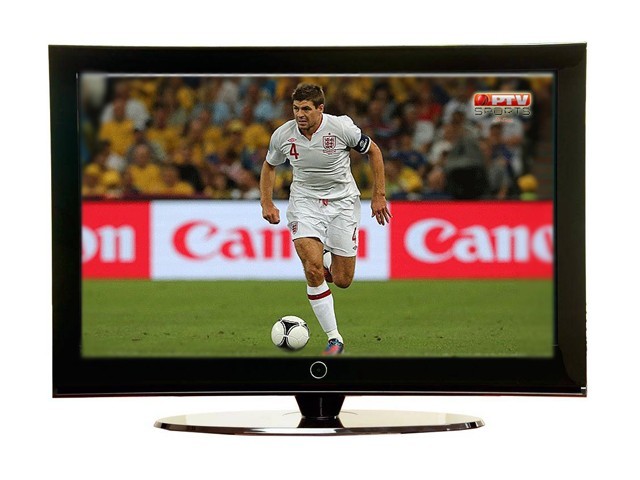 They also seem to have dedicated a person to press the censor button whenever a fan in the audience shows off some extra skin. ILLUSTRATION: ZAHRA PEER

After realising the money in broadcasting sport events last year and in spite of still not knowing enough about the sport, the state-owned channel PTV has coveted the exclusive rights to air the 2012 UEFA European Football Championship, commonly known as the Euro 2012.

Everything seemed to be running normally during the opening ceremony of the Euro 2012; not very sharp picture quality, but nothing one couldn’t live without. The opening match, however, was an entirely different story as it brought with it a shock that was not part of the actual match.

Confused? There was no scorecard displayed on the screen and with no half-time show there was just no way to find out what the score was other than waiting for the commentator to shout out:

The next match followed suit until someone brought it to their attention ─ I doubt they had figured it out on their own. After realising that football matches need a scorecard displayed on the screen, the state-owned channel that made a Rs2.4 billion revenue in 2011, took the scorecard of the most similar sport it shows and changed in into one for football ─ a hockey scorecard. So instead of the time going up to 45 minutes, the clock started at 45 minutes and went down to zero.

Some disgruntled football fan must have brought this to their attention and explained the ‘mix-up’. So the next day we found that they had fixed the clock and now it started from zero and counted up. The management, however, almost always fails to synchronise its clock with the game and ends up starting their second half clock almost half a minute earlier.

Amazed? Don’t be yet. There’s still more to the story.

The newly revamped channel decided to spice up the boring opening day of football by showing commercials while the match was still taking place! So, instead of watching what’s going on in the match, the entire country was finding out what the latest SMS tariff was and missing the first goal of the tournament scored by Polish striker Lewandowski to earn his team a draw.

The group stages are over now and so is most of the drama. Timers have been synchronised and the scorecard is working in the right direction. Interestingly, they also seem to have dedicated a person to press the censor button whenever a fan in the audience shows off some extra skin.

Only in Pakistan, I tell you.

The ICC Cricket World 2011 generated almost half of PTV’s total revenues of Rs1.1 billion in financial year 2011 and helped the channel meet its revenue target after years. It also brought a change in the management’s perception about airing sports.

It seems the channel’s management is still struggling with familiarising itself with the sport while the sport viewers are getting to know the channel. Football fans in particular should start getting used to the orange and silver logo as there are talks that the state-owned channel is going to try and get exclusive rights to air the English Premier League ─  the most watched football league in the world – by next year.

Hopefully, it will be better managed than this has been and not a cause of heartache for the fans who are watching their favourites create history.

The realities of Bigg Boss, Wasim Akram and Pak-India relations