Telling the story of a mosque in America 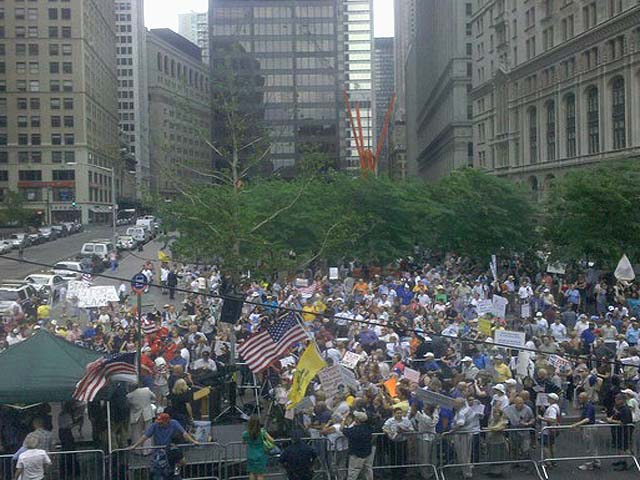 Hundreds of protestors gather in New York to show their displeasure about the proposed mosque.

The controversy over the proposed Islamic centre and mosque near Ground Zero began earlier this year as a contained local story in New York. But today it seems that everyone is talking about it and arguing over it. The centre that had aimed to bring a community together has instead divided an entire nation. Just about every major political leader from the mayor of New York to the Senate majority leader, all the way up to President Barack Obama has weighed in.

The debate centres around two clear issues: freedom of religion and the location where the backers of the Islamic centre want to build.
The First Amendment of the United States constitution gives a person or group the freedom to practice their religion. Supporters of the project say it is their right to worship where they choose. Having the freedom to exercise this right is part of the reason they live in America, and not in another country where it might be illegal.

The second issue has touched a very sensitive nerve. The location of the proposed centre is 2 blocks from Ground Zero – the site of the World Trade Center where religious extremists killed nearly 3,000 people on September 11, 2001. Opponents argue that an Islamic center and mosque this close to Ground Zero will be a monument to terrorism. Families of the 9/11 victims are divided.

The proposed centre is now a political football. New York mayor Michael Bloomberg has come out in support, President Barack Obama seemed to show support as well and then backed off when he realised that some of his biggest allies were against it. The Republican party’s biggest names have said the Islamic Center in this location will be a victory for the terrorists. With the mid-term elections coming in November, politicians across the country from small town mayors to big city congressman are being asked to take a position on the Islamic Centre – just like they do with health care, the economy and immigration.

Ironically, the same amendment of the US constitution that allows for freedom of religion also allows for freedom of the press. The controversy over the project has grown because the national media has jumped on board. The story should be covered extensively, but America is now a country where each news organisation mainly on cable television has their own version of the truth. They all report the facts but by overemphasising certain points and underemphasising others the information is usually spun in favour of their respective agendas.

In order for the news media to continue to cover the story it has to come up with new angles, new developments and new information. This. of course, is part of reporting the news, but with this particular story it is getting quite dangerous. The new developments in some cases are twisting the facts and getting further away from the real issues.
Backers of the Islamic Centre and their supporters are being pressured to reveal where the money for the $100 million project will come from. Most of the dollars will likely come from oil rich Gulf countries who are allies of the United States. But does it really matter? Or is this just another story line?

Opponents have decided that it is a good scare tactic to associate the developers and the moderate imam who will run the Islamic center with Hamas, Hezbollah and al Qaeda. A recent headline in the New York Post caught my attention “Hamas Big Backs Mosque”. I opened the story to find that the “Hamas Big” was a man I interviewed in Gaza while working for Al Jazeera English. This does scare Americans, but drawing Hamas into the debate is a distraction from the real issues.

Most people I talk to here agree on one point and have one lasting question: while the developers of the Islamic Centre and mosque have a constitutional right to build near Ground Zero, is it right to build it there?

An award winning Lebanese-American television journalist and international TV news consultant. He has spent the last year working as a freelance correspondent for Al Jazeera English; most recently in Beirut, Lebanon. As a television news consultant, Baer has trained staff and helped launch DAWN News, GEO News and Dunya in Pakistan, Aaj Tak in New Delhi, SAAM Marathi in Mumbai and K24TV in Nairobi, Kenya. He started his career in 1997 by covering the first ever US-Iran wrestling match since the Islamic Revolution.

Duvalier's return to Haiti: Not really a big surprise

The more things change, the more they stay the same