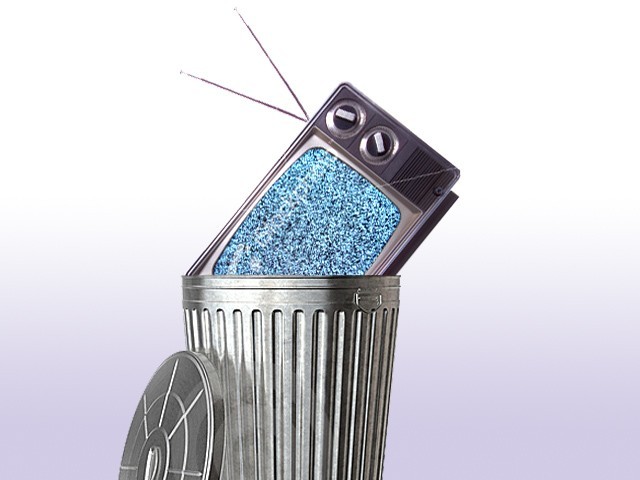 We’re more interested in the stupidity of the news itself, or sometimes even in just parodying it. GRAPHIC: JAHANZAIB HAQUE

The last time I took a five week break from writing my exams, Osama Bin Laden was found and killed in Abbottabad. The whole world oohed and aahed. Did anything that exciting happen this time around?

Nope. Same old, same old. The chief justice’s son accepts bribes and we all get out our popcorn buckets for another showdown. Becky Anderson wins the prize for the most loathed CNN anchor in Pakistani CNN viewership history. And I won a bet with my Dadi (grandmother), who was convinced that Mubashir Lucman was the fountain of all TV holy wisdom until he finally, ahem, revealed his ‘true colours’ off air.

That’s TV for you. But, I don’t watch TV. This wasn’t the 9 O’clock breaking news I was tuning in to. This was newspaper links and Facebook statuses and YouTube clips. The act of getting up, finding the remote, and switching to a Pakistani news channel is so alien, so remote that I’ve been trying to figure out why for some time now.

This wasn’t always the case. There was once a thing called the ‘media explosion’. In my head it’s labelled as pre and post-grade VI. That’s because in that class, the girl sitting next to me had an unfathomable obsession with Atif Aslam and would watch his videos on IM — Indus Music. Remember that channel?  The very first music channel of Pakistan! And that turned into MTV Pakistan, and then there was Aag,  the self proclaimed youth channel with its own focus on music, and then the almost stupidly titled channel The Muzik — all these channels that came out of nowhere, all so new and different to 11-year-old eyes.

And now? I flip though Coke Studio videos on YouTube. That’s it, end of story. We rank artists’ popularity based on the number of YouTube hits they get.

I wonder if the same kind of indifference to the number of channels can be applied to news items. When was the last time you really watched something — that one hour chat show, that interview on XYZ channel? Chances are there’ll be another interview just like that if I go to channel 36 or 46.

Or maybe I’m too young for Pakistani news, in the same way I grew too old for music channels. I’m the wrong bracket, the wrong demographic that’s more glued to their laptops than their TV sets. I’m not clueless — like I said, we get news items distilled in pieces. But we’re more adept at commenting online and sharing stories than we are in actually listening to them. We’re more interested in the stupidity of the news itself, or sometimes even in just parodying it. That’s how I know there’s a certain TV anchor on Geo who looks like Michael Jackson–because of the 10 memes online about him.

News is strange, news is humour, and you don’t need to watch TV for it. Looking back, the surprising thing wasn’t that Osama Bin Laden was killed. It was that his killing heralded actually finding the remote and watching CNN and Geo and Express and Samaa dissect every facet of Pak-US relations or what have you. It meant actually watching the BBC countdown with the red laser shoot through cities around the world. It meant caring about the news that didn’t involve going online and laughing at stupid memes with Osama’s face and Urdu captions.

And it lasted for a week. Then it was back to hype and snippets, back to quick digestible links instead of a trawl though 100 or so channels of nothingness. These days the box lies idle.  If switched on, it is stuck permanently on PTV sports for cricket matches or football. I guess cricket showdowns between India and Pakistan are the only thing worth turning the TV on for.

Until I choose to watch the live stream on the laptop, that is.