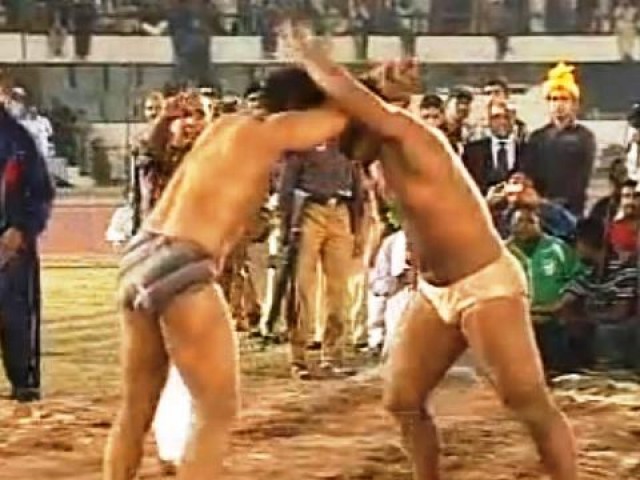 However, there was a ray of hope for wrestling fans as parliamentarians rushed to show off their skills during the recent budget sessions. PHOTO: SCREENSHOT

Almost half-a-century back, the greatest wrestler in history died in Lahore. Gama Pehlwan spent his entire 50-year wrestling career undefeated.  Even today, he is considered to be head and shoulders above anyone who ever entered a ring. He was a role model, not just for wrestlers but for other athletes, too, with Bruce Lee among those that picked up elements of his workout technique.

It is sad that today, not just Pakistan but the world seems to have forgotten about wrestling as a sport, focusing instead on ‘professional’ wrestling, which is really just grown men pretending to fight or noora kushti in the vernacular. While pehlwani and kushti do maintain a popular following, especially in rural Punjab, they lack the support of a state benefactor or the kind of corporate sponsorship necessary to fund training and practice for aspiring young wrestlers.

However, there was a ray of hope for wrestling fans as parliamentarians rushed to show off their skills during the recent budget sessions. Given the perceived poor performance of parliamentarians on either side of the aisle and considering the fact that most Pakistanis consider the parliament an arena for noora kushti anyway, one must wonder whether the 342 members of the lower house are pursuing the wrong career.

Anyone with an eye for talent, who saw the sessions would recognise that great in-ring potential is in the house, especially given that a few of our parliamentarians and political leaders are actually descendants of the Great Gama and other famed pehlwans. For the many self-proclaimed poverty-stricken MNAs, patronage would not be an issue at all, since they’re all in the pockets of big industrialists and real estate developers. Plus, when one considers the fact that a worryingly high number of parliamentarians don’t understand the first thing about elaborate and sometimes confusing rules of procedure, the wrestling world is a lot easier to adapt to.

Rule number one: no low blows.

And that’s about it.

Unfortunately, even that would be a stretch for those who have built their political careers on the delivery of low blows.