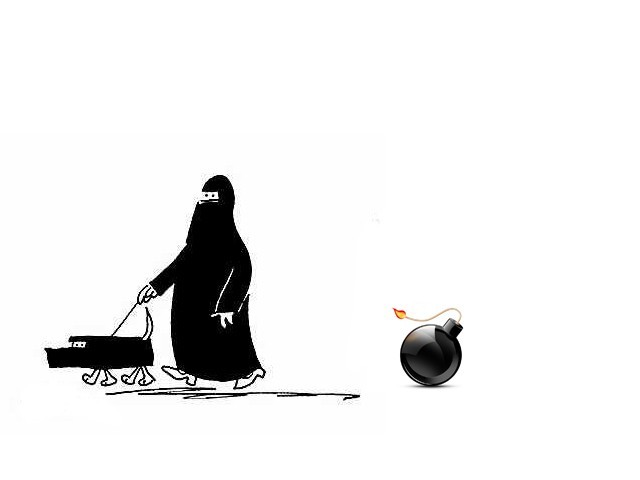 I was convinced that her bag contained a bomb and that she was asking for forgiveness for what she was about to do. GRAPHIC: ERUM SHAIKH

To say that the daily violence in Karachi affects our lives is quite easily the biggest understatement of the decade. As much as we try to shield ourselves from the gore; the aftershocks of protests, strikes, muggings and shootings have permeated and changed our drawing room conversations. Women tell each other stories of neighbours’ relatives being robbed at gunpoint, while men argue about who got stuck in the most dangerous crossfire while returning home from work.

Not long after the Karsaz blast during Benazir Bhutto’s jalsa in 2007, I was coming back from school when I saw a cab right beside our van. The driver of the cab had a beard which covered his entire chest and half of his protruding abdomen but, more alarmingly, he had a suitcase in the back seat. The sight made my nerves go haywire as I pleaded my van driver to either drive faster or slower, whichever, so that we could maintain as much distance between us and the taxi.

Another time, I was in the prayer area of a hospital. A woman came, put down her mammoth-sized bag beside her and began to pray. When she was done, she began crying in her dua and repeatedly asked to be forgiven, loudly enough for the people in and outside the area to hear her. After she was done, she left her bag and walked out. I was convinced that her bag contained a bomb and that she was asking for forgiveness for what she was about to do. I looked at the bag, picked it up, then put it right back. I rushed outside and looked for someone to help me. To my relief, the woman was standing outside talking to her son. There were only a few times in my life that I have been so relieved.

Hence, we are not only affected by what happens in the city but we have built our lives around it. We stock up on food, gas and other supplies in case a strike is announced at midnight and the markets are closed the next day.

Today, elders no longer tell children stories of their childhood; instead, they share stories of how a stranger entered the neighbour’s house and shot him, and that this was why children should never help strangers.

A journalism student who is a former sub-editer at The Express Tribune.

Karachi, my city of violence