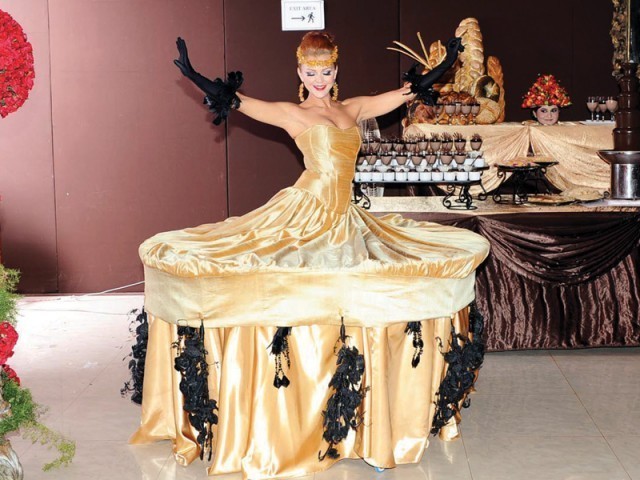 We were greeted by two gorgeous Belarusian girls whose stunning elegance and grace took my breath away. PHOTO: FAISAL FAROOQUI

The word ‘magnum’, when used in an informal manner, indicates something with an unusually great power or size.

But what is magnum to me?

For me it’s that little piece of heaven on a stick – an ice cream of the future. It awakens your taste buds with its smooth, silky Belgian chocolate coating that melts as soon as it hits your mouth. Then comes forth the cold vanilla ice cream in the centre that is indulgence at its finest.

So, given my high regard for this ice-cream, we happily made our way to the much awaited Magnum Chocolate Party on June 10, 2012. And boy did they go the whole nine yards with the theme, which was “Royal”. It felt as though we had just stepped into a castle with a royal banquet in session – it was perfection at its best. I even spotted the very ravishing Ayesha Linnea Akhtar. It was going to be a night we would remember for a long long time to come.

Entering the exquisite hall, we were greeted by two gorgeous  Belarusian girls flown in especially from Dubai for the event. Their outfits were rather dramatic; tables and corset like dresses – something we don’t see in Karachi often. They took my breath away with their stunning elegance and grace.

The black, gold and red draping in the background further complimented the ‘Royal’ theme. Guests were generously ushered to medieval inspired tables layered with velvet, assorted maroon napkins, and gold masquerade masks which further added to the ambiance.

“We want to give people royal treatment and some Magnum indulgence”.

And indeed, everything exhibited a very intricately planned and carefully executed event to further the aim the event was set to achieve.

The night’s entertainment had Ayesha Linnea, Slackistan’s starlet, and Adnan Malik hosting the event for us. Once a brief introduction to the brand and the Magnum brand council was done, they introduced to us the entertainers for the night.

Nida Butt of Made for Stage Productions presented “A Royal Remedy”, a short musical performed to keep the guests entertained while the waiters served dinner. The short play was based in the late 1700s and was about a young princess who had lost her sense of taste. The only cure for her problem happened to be ice, milk and Belgian Chocolate. After Nida Butt’s roaring success of “Karachi: The musical“, I regretfully state that I was highly disappointed with the evening’s entertainment.

I must compliment the outfits and musicians  – they were good and up to par with with the theme. The costumes included colourful brocade jackets, long corseted dresses accompanied by white wigs which successfully brought back the colonial days to the present time.

The major disappointment, however, was the script which didn’t manage to hold the audience’s attention for too long as the chatter in the room became louder as the play progressed.

“Why couldn’t they have had something else?” asked one of the guests.

“I lost interest halfway; I expected better from Nida Butt after her last show.”

The dinner was a five course meal which started off with, of course, a Magnum ice-cream bar  served with a silk textured blueberry sauce and whipped cream. No one could help themselves from admitting that they would not mind a second serving.

However, the waiters failed to keep up with the royal theme and seemed to be in a rush to take the guest’s plates away. This was unpleasant and definitely unexpected.

After the dinner, the  Belarusian girls walked around offering guests desserts and other bite sized treats. The guests found this particular experience pleasingly different and some even were heard complimenting the idea out loud. The novelty of these girls was definitely a stand-out point of the event.

Even though there were some hiccups here and there in the management and serving faculty, the evening was one full of royalty and indulgence; it successfully managed to bring out the image that Magnum aimed to achieve.