What exactly is a Hindu rasm anyway? 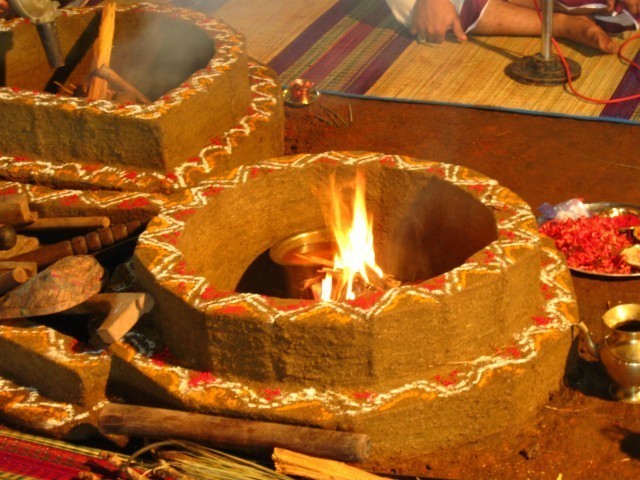 A “Rasm” can be Asian, American or African but cannot be Hindu, Muslim, Christian or Jewish. PHOTO: FILE

Recently, a friend of mine shared a small story about a “dholki” where friends and family had gotten together to sing and dance and celebrate an upcoming wedding of a dear one. During the festivities, a member of the gathering, who was quite uncomfortable, got up and qualified the event as a “Hindu’ana rasm” (Hindu ritual). This, obviously, was followed by whispers amongst the guests, looks of outrage and blatant stares.

Almost all of us have heard this statement at some point in our lives. There are many in our society who deem certain activities or wedding related rituals as being anything but our true culture, be it applying heena, playing the dhol or dancing – there will always be a stick in the mud.

To all those who shout “Hindu’ana rasm” every so often, I would like to ask:

What exactly do you mean by this?

The term itself is an oxymoron. “Hindu” refers to religion, while “rasm” is related to cultural norms.

The term only enunciates the utter confusion that surrounds it. Religion is a set of beliefs while “rasm-o-riwaj” primarily indicates a social set-up or an accepted set of norms. While it is agreed that quite often religious beliefs of a community may impact its culture or social norms, the latter, however, is more about the historical ways embedded in the lives of people in a particular locality. Hence, the way things are done relate more to the ways they have always been done in the relative part of the world, rather than what is being dictated by religion.

So, what one can deduce from such an analysis is that a rasm can be Asian, American or African but cannot be Hindu, Muslim, Christian or Jewish. To elaborate, we have Muslim brides in South Asia wearing red while in America, they wear white. And that is why we never hear anyone say that wearing a white dress to a wedding is a “Christian rasm”.

Thus, when people say that certain things are ‘not part of our culture’ I want to ask them:

Where exactly did we come from?

Did we migrate like the Americans did or have we not always been a part of this soil?

Indeed we have. We have a very strong and deep-rooted history. Our culture is that of the Indian sub-continent or what eventually became of it when people from different parts of the world inhabited the area. How can we then simply sever ourselves and claim to have a different culture just because there is now a border that lies between us?

The fact remains that the border was not always there. People have always been here and they have practiced rituals and norms which have become a collective part of our culture.

Let me also mention the religion stamps which are frequently given to names. It is claimed  that “names” too have religions. Quite amusingly, John is a “Christian” name, Ali is a “Muslim” name and Vijay  is a “Hindu” name. I mean isn’t Jacob an English version of Yaqub or Elijah of Ilyas. Why can’t we settle for categories like English, Arabic and Hindi, instead of Christian, Muslim and Hindu? These names are mere words of a language and have different meanings. For instance, “Vijay” means victorious so why can’t a Muslim be named Vijay? Names may and can have religious connotations, but each name carries a different meaning.

So to what extent will we go out of our ways to create stagnant differences?

The world has gone through much torment. Each community may have uniqueness while at some level, that community may be a part of a country, a continent and must co-exist in order to prosper and flourish. Let us enjoy our uniqueness, celebrate our similarities and enjoy our differences and move towards a higher level of peaceful co-existence.

A banker who lives to love and respect humanity and Tweets @Baahirezaman (twitter.com/Baahirezaman)

What men can expect when a woman is expecting