Thank you Younis, but I think it’s time to go 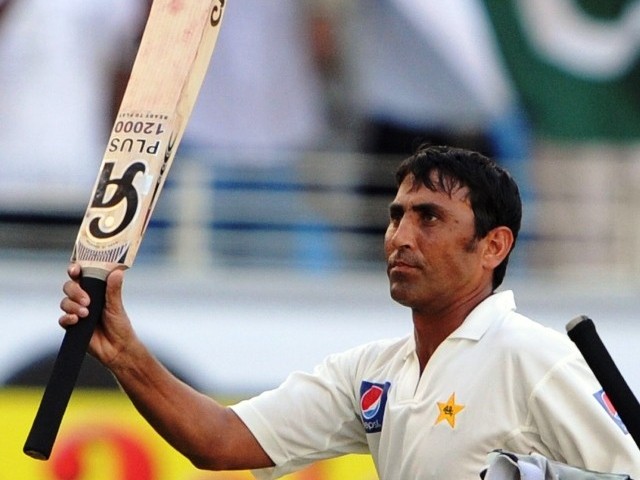 Younis deserves a fitting finale and a farewell - not an axing act similar to what a majority of Pakistan's retired cricketers got. PHOTO: FILE

It is a norm amongst Pakistani fans to incriminate our players after a couple of failures in the sport. We have no patience for our cricketers and for that matter; we have no patience with anyone from politicians to entertainers to sportsmen.

My recent Twitter feed has been overflowing with people calling for Younis Khan to be axed from the ODI team. General discussions on the online cricket forums and Facebook are revolving around the same ‘Drop Younis Khan’ topic as well.

Time for Asad Shafiq to replace Younis Khan (YK) in the #pakistan Odi squad? Not yet. A YK match winning 100 is round the corner. #pakvssl

(What corner is this that hasn’t come in three years?)

@maza786 really YK needs to go even if he comes up with a decent score in the next match, too inconsistent @Ahmed_Zulfiqar @WellPitched

@Ahmed_Zulfiqar Agree with AZ on this one. Even Imran Farhat has been outperforming YK in ODIs in the last year. @WellPitched

So, is it really time for Younis Khan to go?

With a Test average of 52.44 and 20 centuries, Younis Khan is one of the best Test cricketers of his time. He is one of the all time Pakistani greats, and arguably the best Test number three our country has produced. But when you look at his ODI record, it leaves a lot to be desired. An average of 32.33 and only six centuries is not a record of a good ODI batsman who has batted at number three for most, if not all, of his ODI career.

Typically, any ODI team’s top three batsmen are the ones that are expected to play long innings and make big hundreds. On that front, Younis Khan has failed more often than once.

I believe that the difference of 20 runs between his Test and ODI average is probably one of the widest differences between averages across formats for batsmen. Besides this below par overall ODI record, Younis has had a wobbly patch off late as well, which has also led to increased calls for his axing from the shorter version of the game.

He scored his last ODI century almost four years ago in an ODI against the West Indies in Abu Dhabi. His last 15 ODI innings have produced only two scores above 50, which includes one against Afghanistan -that score of 70 is also his highest score in his last 15 ODIs.

Does Younis Khan deserve a place in Pakistan’s ODI XI when players like Asad Shafiq (sitting on the bench), Azhar Ali (cementing his position in the ODI squad) and Nasir Jamshed (who will eventually return from injury) have built strong cases for a place on the team?

The answer would be, probably not.

When Jamshed returns from his injury, he will, in all likelihood, slot back into the opening position with Hafeez. Plus, it will be difficult to drop Azhar Ali after his 96 against Sri Lanka and overall impressive start in the ODIs averaging almost 40 in his first six innings with two 50’s.

I agree it would be a difficult choice to let go of Younis Khan especially with Asad Shafiq – the potential replacement for Younis, who doesn’t have an ODI record any better than Younis himself (averages under 30 in 29 ODIs).

The calls to include Shafiq, however, can be justified given that he is a promising cricketer and has a potentially bright future, but he is not as dependable as Azhar Ali, nor as flamboyant as Umar Akmal. In my opinion, his inclusion in the team will make the batting line up weaker than it is now.

Until a few days ago, I thought that Younis Khan still had it in him to continue in ODIs, but after giving it some thought and considering the value he brings to the Test team, I believe it is time for him to call it day for the ODIs. This may, in turn, prolong his Test career, which will truly benefit Pakistan.

It will be better for Pakistan to start transitioning now, with Younis retiring from the ODIs first, while Misbah carries on for some time. Instead of both the seniors, Younis and Misbah, exiting the line up at the same time and leaving a problematic gap in the middle order.

Frustration of a fellow cricket fan is what provoked this Facebook status update:

Owais Qazi: Younis and Misbah CANNOT play in the same limited overs team. Why does management not realise this??? I would rather have an Azam or a Haris Sohail in there. Just like we have always had amazing fast bowlers we have also always had big hitters down the order. Sad day when we neither now in this team.

I hope the team managers and selectors are also thinking along the same lines, and someone is discussing this with Younis Khan as I write this.

He deserves a fitting finale and a farewell – not an axing act similar to what a majority of Pakistan’s retired cricketers got near the end of their careers.

Younis Khan has been a valuable asset to Pakistani cricket and should consider retiring in a humble and dignified manner.

I think that this ODI series against Sri Lanka should be his last. All I would like to say here is,

Do it Younis, say goodbye to the ODIs before they axe you!