Drones are our friends 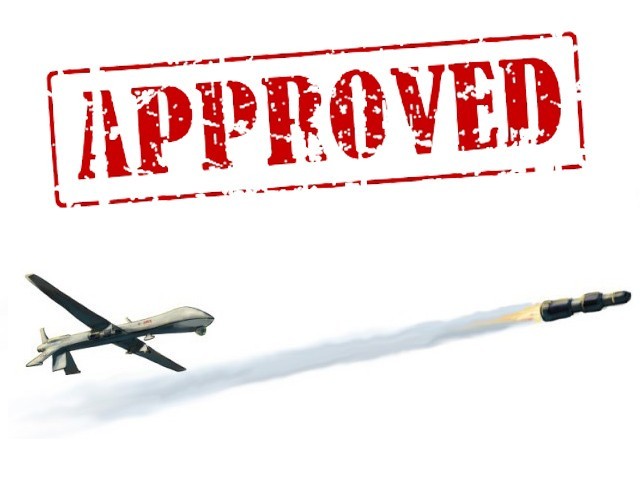 Why is it that we have not yet seen any strong confrontation or action from our government or military on the diplomatic front against drones?

There is a dichotomy of opinions between people about the ongoing drone attacks. Where some consider it to be a good deed when a terrorist is killed, others think of it as mass murder due to the innocent casualties attached to the attacks.

‘Drone’ is one word that every Pakistani knows of at the present time. It is one of the most useful inventions in modern warfare, after the birth of the AK-47. You don’t need a huge on-foot operation to eliminate your targets anymore, nor do you have to risk the lives of your men. Most importantly, drones give instant results which one cannot deny despite all the criticism attached to them.

If you happen to talk to the people from the Federally Administered Tribal Areas (FATA), like I have, you will find that most of them actually favour drone attacks, because lets accept it, most of the time they do manage to get the enemies who have disrupted their peace.

I agree that there have been some drone attacks in Pakistan which have, unfortunately, led to many civilian casualties. However, it would be silly to disregard the fact that collateral damage is just a part of such high level operations. Additionally, it is undeniable that many lives are being saved by eliminating terrorists one after the other.

If you disagree with me, allow me to enlighten you with some drone attacks in Pakistan, and the Arab peninsula, that have yielded effective results and should be acknowledged.

The following timeline highlights ten drone attacks which resulted in deaths of al Qaeda operatives or other militants. These deaths take us one step closer to victory in the war against terror.

Nek Muhammad Wazir was killed in Wana. He was the leader of anti-government militant forces in South Waziristan

Abu Hamza Rabia who was al Qaeda’s third in command and was killed near Miranshah.

Abu Laith al Libi, a member of al Qaeda was killed in a strike in North Waziristan.

Abu Jihad al Masri was the Chief of External Operations (CEO) for al Qaeda and was killed in North Waziristan.

Rashid Rauf was a British al Qaeda operative and he, along with four others, including Abu Zubair al Masri, was killed in North Waziristan. Rauf was one of the masterminds of 2006 transatlantic aircraft plot and later became an explosive expert for al Qaeda.

Ilyas Kashmiri led al Qaeda’s Lashkar al Zil and was the operational commander of the Harkatul Jihad al Islami (HJUI). He was killed in the Karikot area of South Waziristan. He was also linked with the murder of Major General Ameer Faisal  Alvi.

Anwar al Awlaki, also an al Qaeda operative was one of the most sought out leaders of al Qaeda. His teachings have given rise to thousands of extremists waging war against the US. He was killed in Sanaa, Yemen.

Ahmed Omar Abdul Rahman was a senior al Qaeda operative with ties to the Haqqani network. Rahman was a son of the ‘Blind Sheikh’, the spiritual leader of the Egyptian Islamic group who was imprisoned in the US for his involvement in the 1993 attack on the World Trade Centre. He was killed in an air-strike in Afghanistan.

Badr Mansoor served as al Qaeda’s leader in Pakistan and was a key link to the Taliban and Pakistani jihadist groups. Mansoor had been responsible for attacks that had killed scores of people, and was killed in a drone strike in Miranshah. This last attack is proof that the leadership of al Qaeda is still harbouring itself in the tribal areas and despite its key players being killed, it seems to re-establish itself every time.

These were just a few examples of what drones are capable of delivering in the war against terror. If combat forces were to deliver similar results, it would cost them millions of dollars with a greater risk of civilian and militant casualties. We should also note that there has been active research and development to make lighter bombs called ‘Scorpio’. These are being used for drones now as they can reduce the risk of civilian casualties.

Collaboration between the US and Pakistan, with regards to drone technology is something I greatly look forward to. This would not only help defeat the Tehreek-e-Taliban (TTP), but would be a great advancement of technology for our armed forces.

People speak of civilian casualties, that run high, but compare this number to the number of people that are victims of terrorist attacks all over the world or if that’s not enough, just look at the number of people killed in Pakistan; this might help you understand the importance of drones to some extent. Having said as much, I still think the technology can be made more sophisticated and advanced to make sure that there are zero civilian casualties.

The reason for this blog is to spread awareness amongst the people about the extremism that seems to have found a safe haven in the tribal areas. Its geographical location makes it almost impossible for a full scale operation on foot to take place and therefore, the authorities resort to drones.

Now one question still remains, who should have the trigger?

Our military should be the one in control of these remotely operated machines and policy makers should start a dialogue with the US to address our concerns with the trigger being in international hands. This way, we can protect our sovereignty and take active steps in the war against terror. Whatever the outcome, we need a zero tolerance policy against extremists to clear this mess in the tribal belt if we wish to see a safer Pakistan.

Why is it that we have not yet seen any strong confrontation or action from our government or military on the diplomatic front against drones?

Can it be that they consider drones to be exactly what we need at this time?

We only hear the officials condemn the attacks and throw in a couple of warnings, but we have yet to see solid action taken against them.

To all the readers, I leave you with these questions to answer and to judge based on those answers whether we are in denial about the positive aspects of drones or not.

The writer is a political activist and a spokesperson for IHRP (Interfaith Harmony for Religious Peace). He tweets @shanihashmi

Why are we allowing the Taliban an easy victory?