Packaging hope in the flood crisis 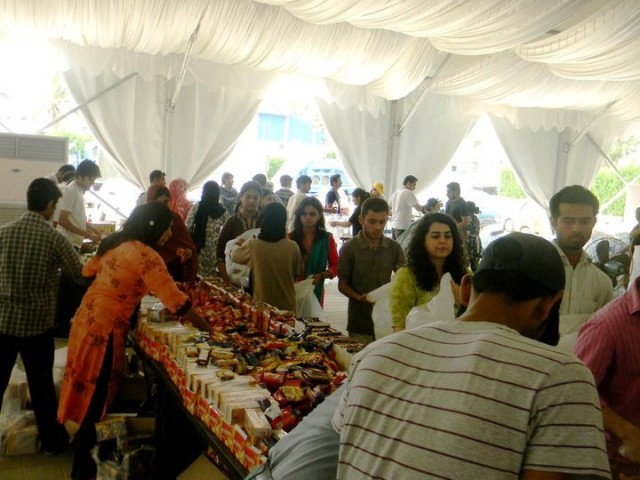 Youngsters gather at Imperial Lawn to donate for flood relief.

Reminiscent of the spirit of volunteerism witnessed in the wake of the 2005 earthquake, scores of youngsters are gathering at Imperial Lawn at Shahrah-i-Faisal since the past two weeks to pitch in their part to help the 20 million affected by the floods that have wreaked havoc across the country.

The spirit at the ground where packing of relief goods was taking place was infectious. One was automatically drawn into the swarm of people who were moving about in circles collecting supplies from the stalls lined around the ground and depositing them at the packaging table.

To use the words of the organisers, there were a lot of “helping hands” that made the task possible.

This was the Help In A Box volunteer relief camp set up at Imperial Lawn at Shahrah-i-Faisal for the packaging and loading of relief supplies to be dispatched to the flood affected areas.

The programme was initiated around three weeks ago and supplies ranging from bedsheets, dry food items (including biscuits, dates, powdered milk etc), medicines and beverages (bottled water, tetra packed juices and milk) to other household items were collected at a location in Khayaban-i-Shahbaz. Thereon, the group sought the help of volunteers to help pack the relief supplies to be dispatched to the affected areas through the army. One consignment has already been sent and more will be sent in the coming weeks.

“We plan to make this a continuous process till help is needed,” says Sultana Haider, one of the organisers.

The group accepted only goods and not cash as donations, and so far 20,000 packets have been made, shares Adeel Hashmi, one of the founders. Six packets make one box and the group plans to send around 30,000 boxes by next week.

“It all started when Adeel and I decided that instead of complaining about what the government is or is not doing, we should start a campaign on our own,” relates Shahzad Qureshi.

The campaign has received a “tremendous response” from the volunteers, say the organisers. Their primary means of advertising the campaign and mobilising volunteers has been by the use of social media including Twitter and Facebook. With a Facebook fan page having over 2200 followers, Help In A Box was able to mobilise a good many helping hands to contribute in the donations and packaging activities.

“When we started, it was based on word of mouth and we were able to reach only friends and friends of friends,” relates Haider. “When we announced it officially on Facebook, Twitter and text messages we saw more than 200 volunteers turn up for the work.” The number of volunteers later swelled to around 1000, most of whom were students.

Hania Hanif is one volunteer who came to know about the campaign through a text message sent to her by a friend. “Alhamdulillah it was the opportunity I was yearning for,” says Hanif. “As much as I wanted, I could not go in body and soul to the flood affected areas to help the victims. This call for help came in as a good alternative. If I can’t go to them, at least I can help those who are going to them, is what I thought.”

She is particularly appreciative of the spirit of the volunteers at the ground: “It was a heart-warming sight. Not a sigh did I hear from the volunteers who were running around packing the goods. Some were drenched in sweat, some huffing and puffing in their fast, but all had a satisfied smile on their faces. One could feel the spirit of Muslim brotherhood in the air.”

The group has a number of other projects in the pipeline and is seeking the help of volunteers in the process. Among their future plans are those to send a team of doctors to the flood affected areas; to send a team of women for children’s facilitation in the flood affected areas; Help In A Box education which will be facilitating the provision of education to the victims; and Help In A Box shelter campaign which is collecting panaflexes with the aim of turning them into tents. The group aims to set up 10,000 such tents in the affected areas in the next 20 days.