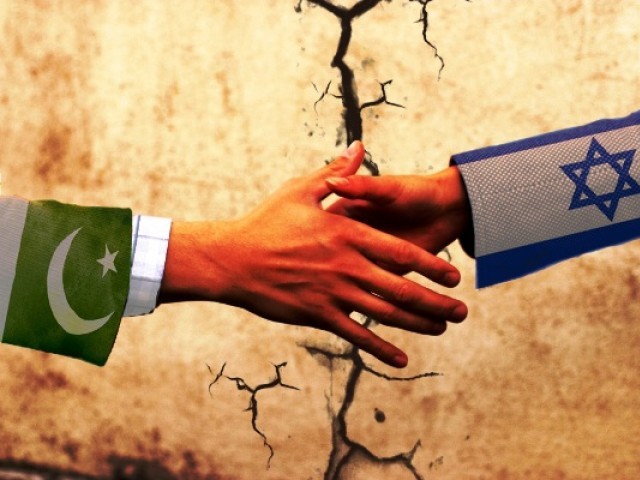 There is a wide misconception that the clash over the holy land is solely between Muslims and Jews. The fight is for human rights who everyone has the right to defend. ILLUSTRATION: EMA ANIS

In 1947, Israel’s founder, David Ben Gurion sent a telegram to Muhammad Ali Jinnah in an attempt to establish diplomatic relations with Pakistan. The telegram was initially ignored and to date, Pakistan still refuses to recognise Israel as a state.

Ben Gurion was allegedly quoted in The Jewish Chronicle in 1967 on his view of Pakistan:

The world Zionist movement should not be neglectful of the dangers of Pakistan to it. And Pakistan now should be its first target, for this ideological state is a threat to our existence. And Pakistan, the whole of it, hates the Jews and loves the Arabs. This lover of the Arabs is more dangerous to us than the Arabs themselves. For that matter, it is most essential for the world Zionism that it should now take immediate steps against Pakistan.

Whereas the inhabitants of the Indian peninsula are Hindus whose hearts have been full of hatred towards Muslims, therefore, India is the most important base for us to work from against Pakistan. It is essential that we exploit this base and strike and crush Pakistanis, enemies of Jews and Zionism, by all disguised and secret plans.

This famous quote has never been verified and many Israeli academics dispute its authenticity. However, it is a well-known fact that Israel is not favoured by Pakistan. If you don’t believe me, just take a look at the recent blog published on The Express Tribune about Israel.

Over the years, I have heard many arguments regarding the Palestine-Israel conflict. From holding Hamas and Fatah accountable for internal bickering between the West Bank and Gaza Strip, to blaming all Arabs for being arrogant towards south-east Asians as a whole – therefore the Palestinians deserve the unrest and the injustice. And above all the arguments is the one that takes the lead; Jews have the biblical right to a land that was promised to them by God.

To explain these reasons to a Palestinian living off UN handouts in a refugee camp in Lebanon or Jordan would be an insult and borderline insensitive. Imagine having your culture and livelihood taken from you and being expelled from your land. Or, to be degraded daily by the Israel Defence Force in checkpoints strewn across the occupied West Bank and have your child shot by Israeli extremist settlers in Nablus.

Human rights violations are rife despite Israel portraying itself as the beacon of freedom in the eyes of the international community. Israel would have you believe that Palestinians are all terrorists and it’s only defending its citizens from suicide bombers and Islamic extremists.

The reality however is very different.

There is a wide misconception that the clash over the holy land is solely between Muslims and Jews. There are over 300,000 Palestinian Christians in the disputed territories, along with many more living abroad. They too are discriminated against equally as their Muslim counterparts. Israel uses sophisticated lobbying from institutions such as the American Israel Public Affairs Committee (AIPAC) to portray Palestine as the aggressor.

Then comes the question, ‘Would it be in Pakistan’s interest to recognise Israel, like countries who already have such as Egypt and Jordan?’

If not for economic stability, then maybe to increase its list of allies?

I would have to say no.

Not because of the Muslims versus Jews debate, or the ties many people have to the third most holiest site in Islam, Al-Aqsa Mosque, but based more on a human level.

If it was the other way around and Palestinians were occupying a land by killing innocent civilians and begrudging them their basic human rights in the 21st century, I would reiterate my decision regardless of religion or race.

We cannot let our names represent an apartheid regime and ethnic cleansing of Palestinian people. We should push for peace in one of the most complex conflicts of our time, and simultaneously hold Israel accountable for its actions – something which the UN repeatedly fails to do.

I must also emphasise that I’m not anti-semetic and I don’t agree that Jews are our enemies either. Zionism and Judaism are two very different concepts. To simplify things, all monotheistic beliefs are from the same maker which renders the fight over religion pointless; hate will only brew more hate.

This is a fight for human rights who everyone has the right to defend.

Pakistan itself has a tainted slate when it comes to human rights. But it wouldn’t get any closer to making amends by forming an alliance with Israel either. And as for improving Pakistan’s image externally, well maybe we should focus on procuring a change from within first and then worry about what image others have of  us.