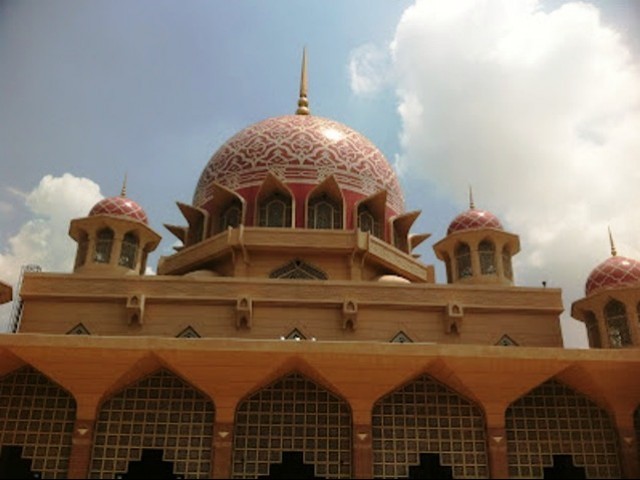 Regular prayer is part of the routine for Malaysian Muslims. PHOTO: DALIAH MERZABAN

It is always a treat for me to go to mosques in the countries I visit because it reminds me how universal the message of Islam – describing a state of mind where one surrenders or submits to the one Almighty God -truly is.

One of the highlights of my first trip to Malaysia was visiting a number of the country’s beautifully designed and diverse mosques catering to the 60 percent of Malaysia’s 28 million people who are Muslim. Some of the mosques were Ottoman or Arabian influenced in their style, while others boasted traditional Malay architectural designs, some exhibited  modern and  contemporary blends of old and new. Many mosques in Malaysia have a very welcoming and communal ambiance, which is quite unlike my typical experience with the mosques in the Gulf Arab region where I live.

Apart from a few exceptions, Islamic places of worship in the Gulf do not, in my view, usually boast a welcoming atmosphere, particularly for women. So while visiting places like Malaysia and Turkey, I have enjoyed visiting and praying in as many mosques as possible.

I arrived in Malaysia on a Friday morning and almost immediately, the friends I was staying with and I attended the Friday prayer at the Putrajaya mosque in Putrajaya, situated south of Kuala Lumpur and adjacent to the Malaysian prime minister’s office. The dome of this rose-coloured, lake-side mosque made of granite comprises of  fabulous shades of pink. In addition to the prayer area, the mosque includes a courtyard and learning facilities, giving it an open and communal feel that welcomes the worshipper and a visitor. As we approached the mosque, we came upon a group of Buddhist monks, snapping photos of the impressive structure as they left the premises. 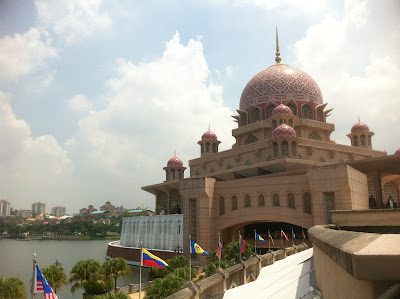 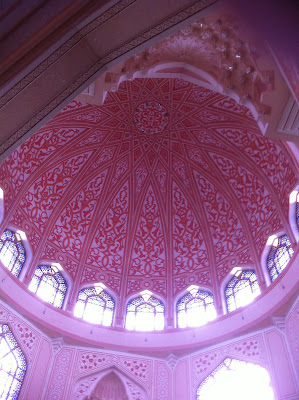 Regular prayer is part of the routine for Malaysian Muslims, who take extended lunch breaks on Fridays to be able to attend the weekly Congregational prayer. It is customary for Malay Muslims to learn the Arabic language from a young age in order to be able to read from the Quran, or ‘The Recitation’ in English, which charts out the path individuals should take to strive toward eternal peace and escape from modern life. In the past, my friends told me that the Malay language was customarily written in Arabic scripture in newspapers and even today, when the use of English letters is common, many Malay signposts in the country use Arabic’s phonetic alphabet.

I had been looking forward to visiting Shah Alam, in the state of Selangor, to visit Masjid Sultan Salahuddin Abdul Aziz Shah, also known as the Blue Mosque. This structure was built during the 1970s and 80s and my close friend’s parents, both architects, had worked closely on its design. The mosque’s blue and silver dome is adorned with decorative, hand-painted Islamic calligraphy. Outside the place of worship, vendors sell foods, clothing and other goods, while surrounding the mosque is a park, the Garden of Islamic Arts, adding to the mosque’s communal and welcoming ambiance. 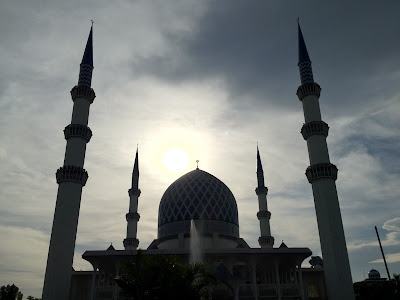 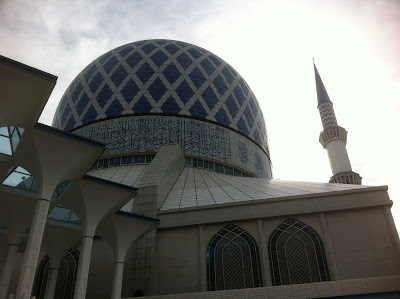 Probably the most-unique mosque we visited during my four-day trip was the ultra-modern ‘Iron Mosque’, or Tuanku Mizan Zainal Abidin Mosque, in Putrajaya. Completed only a few years ago, this mosque boasts an immense steel dome and a minimalist, open-air design that allows natural light and air to pass through the structure. Surrounding the prayer area is an infinity pool that stretches to the edge of the building and provides an unhindered view of the encircling lake outside. A comfortable prayer section with a panoramic view of the natural and urban landscape softens the building’s awe-inspiring construction framed by numerous carefully curved beams of steel.  We arrived at the mosque just before the sunset for Maghrib prayer. I sat at the edge of the tranquil infinity pool, watching the sun set on the lake outside as the call to prayer resounded clearly through the mosque’s high ceilings and perforated structure. It was truly an inspiring, tranquil experience. 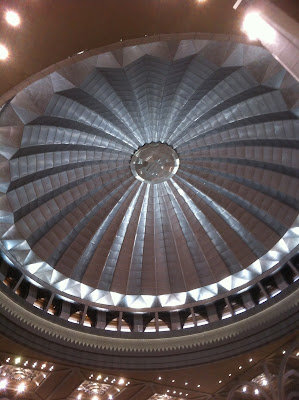 Another treat was seeing mosques in Malay and Chinese designs. At the Islamic Arts Museum in Kuala Lumpur we saw models of many of the world’s mosques, including some of these traditional Asian designs. 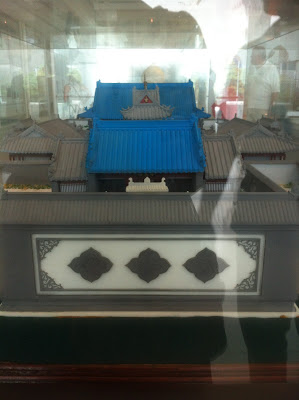 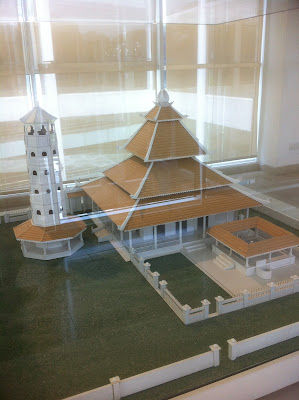 In Melaka, located south-east of the capital along the Strait of Melaka, we offered the afternoon prayer, Duhur, in this lovely building. 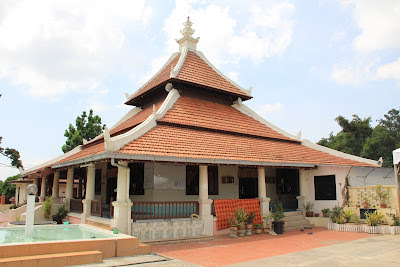 Practicing Islam, which involves regular prayer, fasting and charity, is ingrained in Malaysia’s warm, welcoming, humble and moderate culture. It was an absolute joy to visit the country and I look forward to a longer trip in the future to be able to soak in more of the rich, nuanced heritage.