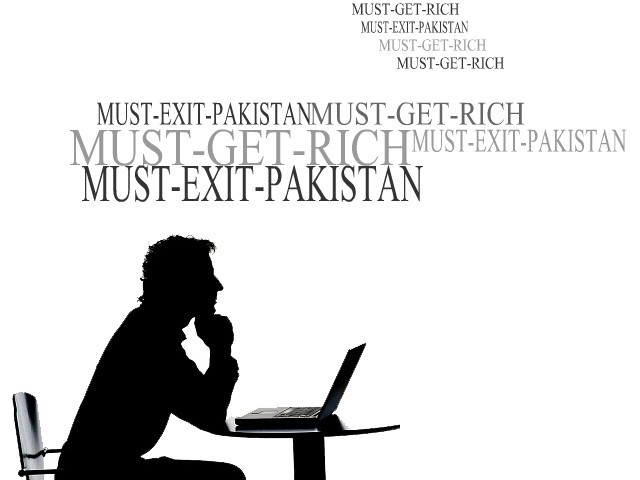 I want to repay my debt but will this country provide me with a platform to do so? DESIGN: JAHANZAIB HAQUE

At the age of 23, my indebtedness to Pakistan was inversely proportional to my progress in life. My mind was uncluttered and my ambitions were sky high.

The nation’s politics didn’t interest me; its understanding of religion was at loggers-head with my comprehension, its roads didn’t let me walk my walk; its dress code did more to accentuate a woman’s curves than it did to hide them, and its history didn’t have any role to play in my future.

Moreover, despite my life-saving attempts, I could not bring myself to fall in love with a special someone either (something that kept my friends going).

I wanted to secure a job that would help me save the world– in other words, my only intention was to get the hell out of Pakistan.

So, I tortured myself blatantly and paved my way out of this Murdistan (land of dead). I started studying 17 hours a day, and in order to do so, spent more money on buying candles than I did on food – need I say why?

I got first-class honours in my undergraduate degree, wrote a novel to let out my frustration, somehow managed to develop acute arthritis coupled with a locked jaw. Finally, I secured a full scholarship to The London School of Economics (LSE). Voila, all it took was a lack of life and a few broken bones to be able to board Pakistan International Airlines (PIA) and bid my fellow-men farewell.

I was in tears when I stepped onto British land as the imaginary background music “Here I am” played in my head. Here I am, two years down the line, and there is nothing more left on my “to-do list”. Frankly, I have it all. I graduated last autumn, and was immediately offered a job at one of Europe’s largest investment banks. I was recently informed that my permanency at the company has been confirmed. My salary will be twice as much, and behold my fellow readers, I will also be travelling all around the world. Before I could walk out of the office, my interviewer stood up, and uttered the following words to me:

You are the first Pakistani to have been offered this role. Well done.

He thought you were very different. He thought that you would not be the person you are today had you been British, your experiences wouldn’t have been diverse and your struggles not commendable. You would be too mainstream had it not been for your origin.

The curtains fell on my convictions that moment. From this point on, my indebtedness to Pakistan was going to be directly proportional to my progress in life.

But the predicament remains that I am of no use to Pakistan with my current inexperienced set of skills and  by the time I have acquired the experience, I would have formed strong ties with the West. My question to Pakistan is: seven years from now, when I have invested sufficiently in my progress, will you still be there to welcome me?

Ladies and Gentlemen, I want to repay my debt but will this country provide me with a platform to do so?

Why do I have the feeling that an avid reader of The Express Tribune who frequently comments on blogs under the alias “Uncle” is going to drop a line saying, “Beta, peechay mat dekhna” (child, do not look back).

Is the author of "The Mind of Q". A young Pakistani currently based in London working for Societe Generale Corporate & Investment Bank, after having graduated from The London School of Economics in Finance.

Poetry of the Taliban: An oxymoron?