Vukla diaries: The answer is no 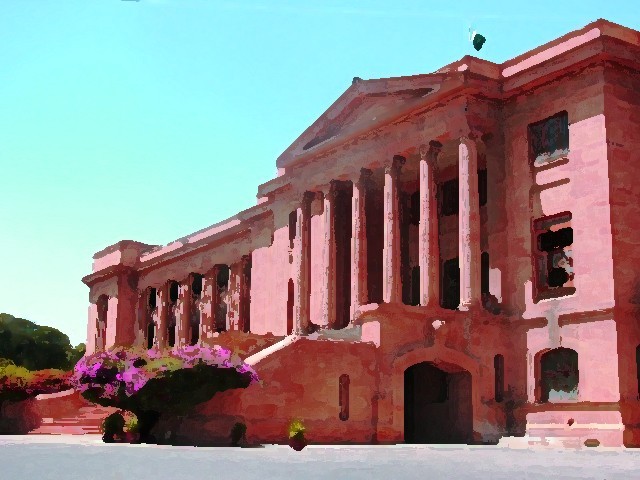 Cases should be scheduled to be heard; all Sindh High Court judges should have the assistance of law clerks. GRAPHIC: SUNARA NIZAMI

Does the little litigant have a chance to be heard in High Court? Can you ever be safe from the treachery of peers? Do young women lawyers even stand a chance? With a heaviness in my heart, the answer to all of the above questions is no, and it took me all of May to figure it out.

Last week, students and I sat in Justice MB’s courtroom. MB was not a PCO judge; he is principled, sweet, and likable. But likability does not change systems. The courtroom was crowded with men, and a handful of hassled women with covered heads, dodging stares and palpable sexism. There was media. The court heard sustainability and jurisdiction arguments, and only later did I realise that this was Rauf Siddiqui’s inane blasphemy petition against Zulfiqar Mirza.

The petition was dismissed and this was commendable.

But at what cost?

The petition did not add to our economic productivity. It did not even put a progressive spin on the debate against the blasphemy laws, simply reinforced class power — that rich, pathological politicians can, at par with Christian minorities, be targeted in blasphemy cases; but they are swiftly exonerated with the help of competent counsels, while lower income minorities like Aslam Masih, after being arrested in 2010 on false blasphemy charges, languish in prison and then die from dengue fever in custody.

Politicians get their unfair share of sacred court time, while the poor, the Dalits, get death and detention. And I am not even being dramatic.

Moreover, it was a waste of resources.

Jail vans transported incarcerated appellants to court; their hearings were set but not conducted; their lawyers were a ‘no-show’, and for a reason – they did not practically expect to be heard in light of more pressing issues pertaining to reputations of the rich and notorious. The court bustled with wasted effort. The police guarded detainees who did not need to be there. The drivers waited.

It was life, malaise, hierarchy, and nothing useful on a hot Tuesday afternoon – with the little humour offered by the bailiff’s archaic uniform, and little respite by the court’s cool floors and regal architecture. Enough to make a British colonial lustful, but we blend right in and barely notice. I guess the chai wala, from the court canteen, made money in case you think I am harping on the negatives.

But besides adding nothing of value – there were several procedural, systemic flaws that have become part of court culture. Lord Woolf, famous for making English courts efficient in 1999 and dealing with clogged dockets, should be thrown in. Foremost, there was too much emphasis on all out oral arguments that are inefficient and usurp court time. Written submissions that make the subtle, and the complex legal arguments, with references should have been read by the judge prior to the hearing and oral arguments streamlined to a 15 to 20 minute (uninterrupted) speech by each party followed by specific questions from the judge.

But here, it was like everything was being done right there like a broken system gone awry because the judge has little time to review files beforehand; the bench is over burdened. Counsels interrupt each other and belligerence is acceptable.

Cases should be scheduled to be heard; all Sindh High Court judges should have the assistance of law clerks, who summarise for them how each case should be decided; lawyers fined for not showing up or asking for an unwarranted continuance of the case; and although these are public hearings – that right of the public should be balanced by their right to be free from fire hazards that become a real risk when the court corridor is clogged with people.

Most women lawyers had submissive body language. Their law uniforms (dubious in the post critical jurisprudence world) exemplified their enforced conformity and embrace of hierarchy. Uniforms demonstrate discipline; yet in the US, lawyers do not wear uniforms and get more work done.

In Pakistan, we focus on form over substance. Dull traditions, ceremonies and keeping people in line over what matters.

My students complained of stares. I told them what I tell most young women: bad men prey on vulnerability. Exude confidence and ability in every move, and while it’s impossible to question an array of oglers, it is possible to put one at task and ask him politely while he tries to consume you with his eyes:

Can I help you?

Call them out right there.  And at all other times minimalise the emotional noise and distraction caused by peripheral harassment. Be combative selectively because patriarchal persecution should not end up defining you. Focus on the work.

This brings me to my second connected lament. Girls have little chance. Paraded by mothers, preened to look marriageable, trained to be hostile to other women and to treat older women as threats of authority rather than as friends and role models. No interest in work and law career, just insidious wifery that allows elite level consumption at boutiques and cafes.

But here’s the thing – it’s the female law students who want change that matter. It’s them who are the ones who are stifled by these expectations in a pimping culture, sick of over consumption, classism, sexism, and broken systems. And there are plenty of those as well.

But then what does the economy offer these girls?

Are there well paying jobs in harassment and personal intrigue; free offices that offer meaningful work in exchange for their legal skills?

How long before they give up, given the mean competition and an ailing economy functioning within war and terror stories.

After all, marriage, like prostitution, is all for economic reasons, and it’s wrong to be judgmental when financial and social insecurity looms large.  Even the upper middle class worries with rising petrol prices and gas guzzling vehicles.

Girls can struggle for reform, heighten the debate, or delay the decay. If they have the resources, the grades, young women should go abroad (India, Bangladesh, Nepal) or to local universities for LLMs and PHDs in law. Come back with idealism that will last ten years. By that time, things will change on the ground because things are always in flux in Pakistan, and too many people with legal issues pushing from underneath for adjudication and their day in court – shifting the power equation in an impermanent universe.

There are people in high positions working on judicial reform; in fact many reports have been written on court reform, and while a lot remains to be implemented, systemic reforms an imperative, high court dates are now computerised, and little and big changes possible.