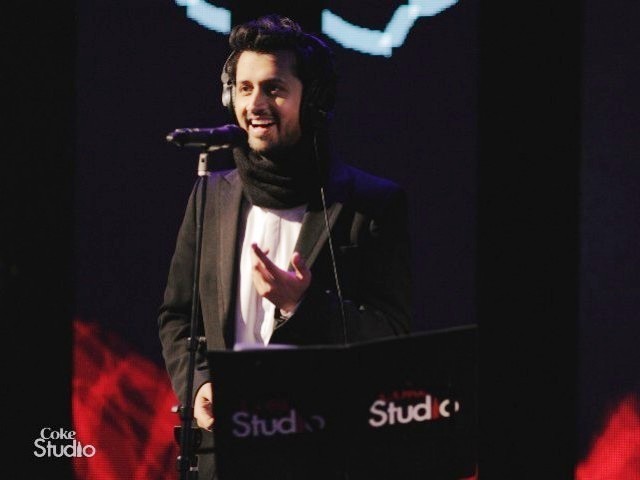 At 6:40, you see that Atif is confused about whether he wants to flow like a rapper or bend down and scream like a rocker. The track overstays its welcome and has a misplaced climax. PHOTO: KOHI MARRI

After the great letdown of a listless and overproduced episode one, one wondered if episode two of Coke Studio would be any better.

Bilal Khan would be there with his viral, pop appeal, Atif Aslam, the top star of the industry with a solo track, and perhaps this time around, one hoped, some edgier material might sneak through.

And one track most remarkably did.

Khabaram Raseeda by Fareed Ayaz and Abu Muhammad is stunning.

It is at its basic best – passionate, raw qawwali and the Coke treatment for once adds much to it. It seems that the more authentic the producers allow an act to remain, the more effective it is. The improved fidelity and production standards of Coke Studio help amplify the power of this track.

However, at its most basic level, the track excels due to the power and passion of the performance; the jaw dropping energy and skill of the singers. This is by far the best track of this season yet and it would take something outstanding to outdo it.

The other track of the episode that was impressive, curiously, was the Chakwal Group’s track Ishq Aap Bhi Awalla.

It was successful despite the Coke treatment and more due to the earthy folkish-ness of the group. Credit must go to the producers for discovering and presenting the troupe; they really are impressive and impassioned.

Coupling Meesha Shafi with them however, was pointless and embarrassing; she is there more or less wiggling as eye-candy (rocking an impressive Goth look) and is heard less than even the backing vocalists, the Viccaji sisters.

Maybe the vocal credits need to be interchanged. Curiously, Coke Studio even got Asad Ahmad to let his hair down, though only literally and not figuratively. It really makes me wonder what they feed the eternal rocker and the rest of the band before they go on; warm milk and a sedative?

There is an utter lack of interest among the band.

My advice, take a look at Muneer Hussain, lead man from the Chakwal group and learn passion for performance.

After the benchmark set by the above two impassioned performers, the more known and popular artists suffer by comparison.

Bilal Khan, with his new song Larho Mujhey, flounders more than most. Bilal more than anything is a very effective songwriter. He is certainly not as skillful a singer as most others and to put him out of his comfort zone, upfront as a singer alone without his guitar, is asking for too much.

He tries to sing, but the effect is middling and barely spectacular. The track is a strange one too, impressive in part lyrically and the central premise (borrowed from Noori’s Mujhe Roko?) but is equally awkward in other parts.

The song is another one which shows what happens when the songwriter is not made part of the reinvention. One wonders why Coke Studio insists on messing with songs. Why do they put in a needless breakdown? Why do they insist that the song is longer than five minutes when three minutes would be perfect and the band itself states the song gets monotonous in bits?

I am sure Bilal’s single, at around three and a half minutes in length, will be catchy and possibly even a hit, but the song is pointlessly stretched out and at 4:40 one hears, what could have been, martial drum sounds, sembling an irritating neighbour incessantly knocking on the door.

Perhaps the neighbour was asking for the song to end.

The Coke Studio neutering effect is most evident on the biggest star on display, Atif Aslam.

Coke Studio messes with quite an impressive Rabba Sacheya and makes a muddle of it. The Coke Studio version of the song is so much poorer in comparison to Atif’s original version. More effort seemed to go into Atif’s wardrobe than the performance itself. He could have done better than reading lyrics off a lyric sheet.

The most exciting moment in the entire song is when Atif takes the mic off the mic-stand.

And at 6:00 the expressions of the bassist probably best sum it up.

At 6:40, you see that Atif is confused about whether he wants to flow like a rapper or bend down and scream like a rocker. The track overstays its welcome and has a misplaced climax. Atif at most times is fearless (consider the YouTube dancing mystics performance of the same song) but here he needs to ask himself what persistently going back to Coke will do for him.

Atif highlights the problem with singing material that, songs like Maidha Ishq Wi Toon, previously sung by masters, is that one inevitably compares the performances and suffers by comparison.

The lack of animation in the Viccaji sisters is also troubling for the second episode running. They too, listlessly, go through the performance. Ultimately the song shows that a lack of understanding of the text is fatal and that the length does not necessarily make a song great or epic.

Lastly, Mithu Tahir’s Pere Pavandi Saan is a song suffering from schizophrenia in search of an identity. Overproduced and all over the place, it passes by pointlessly, a wannabe Nusrat Fateh Ali Khan of the real world ending up being Mithu Tahir, unknown to most and uncared for by other.

The several weak performances aside, overall, one gives a passing grade to this episode on the strength of the qawwali and folk number alone. They salvage the episode and demonstrate that Coke Studio works better when it is not being Coke Studio; the house band works in service of the song and the artist, rather than the other way around.

Is a Barrister-at-law and Managing Partner at Qayyum & Associates Lahore. He has been an avid music critic for 10 years and tweets @maqsimillion

Entity Paradigm: Can one milk a dead cash cow?