Just how powerless are we? 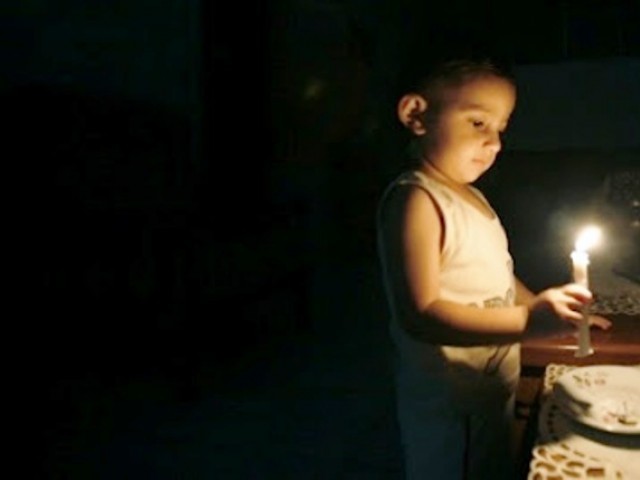 I wonder if there can be any semblance of progress without the ability to first turn on a light bulb. PHOTO: REUTERS

As a child, the smell of a blown-out candle was among the sweetest of fragrances that I knew. Not because my mind equated it with birthdays, but because it signalled that the power was back on.

It would begin with the sudden disappearance of Mario from the television screen smack in the middle of a boss level, amidst a chorus of frustrated interjections from me and my cousins

Grandfather would then light a gas lantern fixed in the living room wall, as well as some candles strategically spread around the ground floor. Occasionally, there’d be a petrified little kid stuck in the bathroom during the sudden outage, who would begin wailing out to the heavens seeking deliverance from his aphotic prison.

We’d huddle up in the living room, pouting and mumbling. Grandma would grab her trusty hand-fan, waving it a dozen times in our direction, and then thrice at herself.

The time was particularly taxing for the children. That was the era when our generation was growing accustomed to -no dependent on – electronic treats like gaming consoles and computers. The sudden cessation of power would leave us discombobulated, looking doltishly at each other thinking, “Now what do we?”.

The answer to that would come out of the storage room in the shape of a giant carrom board, which I’ve always assumed was from the Paleolithic age. Yes, this was how they used to deal with boredom before the advent of Sonic, the hedgehog.  If not that, then there was always Ludo, and ‘chiria urri’ to keep us occupied.

On certain days, it’d simply be too hot to remain indoors, and we’d move the party to the rooftop or the front lawn. Now that I think about it, that’s probably how I became a stargazing enthusiast.

Twelve years later, here I am, sitting in the front lawn with my faithful laptop (my deathless gratitude to whoever invented this marvellous device) after my UPS breathed out the last of its electrical breaths.

The 10-year old Faraz would never have expected this scourge to stretch out this far into the future. But then again, the 10-year old Faraz was a dreamer, untethered from reality by his stupendous optimism. I’m different, though – a 22-year old snarky pessimist, laughing softly at the idea of spending considerable resources censoring the internet when we barely have the electricity to run the computers in the first place.

The constellations in the sky appear vivid in the utter darkness that has devoured my neighborhood. And the sight of my old friend Orion reminds me of how little we’ve travelled ahead as a nation.

Provided that the generators and UPS devices have bettered the lives of some, most of Pakistan remains incarcerated in the era of my 10-year old self. Powerless, literally, against the incomprehensible political and economic complexities, as they go about lighting candles and waving hand-fans.

I wonder if there can be any semblance of progress without the ability to first turn on a light bulb.